Been There, Done That Dude Lit 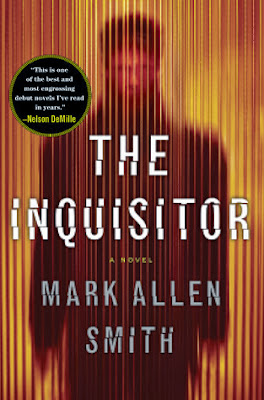 The Inquisitor
by Mark Allen Smith
Published by Henry Holt and Co.

3 Out of 5 Stars
Reviewed by Amanda

In The Inquisitor, our protagonist wakes up in New York City with no knowledge of who he is or where he's been, but possesses a keen survival instinct. Managing to get work on construction sites for cash, he eventually gives himself the moniker of Geiger and earns the trust of the local mob. His friends in dark places provide him with the economic means to utilize his true talents and start up his own company in "information retrieval." An unconventional business model, sure, but a man with amnesia has got to make a living.

For the past 15 years, Geiger has become extremely skilled in his chosen profession and knows the best ways to push people to their limits through psychological rather than physical torture. Whether working for the government or for criminal enterprises, Geiger has only one drive: to get to the truth (there's some pretty broad symbolism in his name; like a Geiger counter detects radiation, our Geiger can detect the truth amid his victim's desperate lies). When a child is brought to him under questionable circumstances, Geiger finds a conscience and helps the boy, Ezra, escape. In doing so, the walls his mind put up to keep out the demons of his past begin to crumble, threatening not just his safety, but that of those he's vowed to protect.

I thought I would be getting a fresh take on the thriller and, while this is a serviceable entry into the genre, it tells a safe, by the numbers tale. Like most of its ilk, it's completely implausible, but it is better written than most, falling somewhere between David Morrell and Robert Ludlum. Still, it has a highly-polished movie script feel to it. (In my mind, I was already playing casting director, and that's not a particularly good sign as it usually means I'd rather be seeing the movie version--by the way, I've settled on either Jeremy Renner or Daniel Craig to play Geiger; have their people call my people and let's make this thing happen, baby). The big reveal in the end is a letdown and doesn't really seem like the type of thing that would kick up all of the fuss in the novel.

The biggest problem for me was the character of Geiger himself. Seemingly emotionless not just in the interrogation room, but in life as well, Geiger isn't the type of character one can connect or empathize with. He approaches his torture with a cold, clinical precision, but I suppose we're supposed to see the moral core hidden deep, deep down in his psyche because he tries to actively avoid physical harm. His lack of relationships and his refusal to engage with the world outside the limited one he's built for himself make him seem inhuman. There's some definite overtones of Terminator 2: Judgment Day here. Like the Arnold Schwarzenegger character, Geiger is a badass mofo who protects the young Ezra and in a hesitating, halting manner, begins to express human-like emotions. It's dude-lit in which men get to envision themselves as steely-eyed, square-jawed, testosterone-fueled protectors willing to sacrifice themselves so that others may live. Like I said, we've been here before.

The one thing that should make Geiger intriguing, his repressed past with a father whose motivations are unclear, is never as fully explored as I hoped (is he trying to protect his son from a known danger, or is he just a sadistic survivalist intent on making his boy as tough as possible?). While we do begin to get a clearer picture of what the young Geiger endured, Smith isn't putting all of his cards on the table yet as this is clearly intended to be an enduring series.

The Inquisitor is what it is and, for what it is, it's fairly well done. However, the stock characters and lack of psychological depth means I probably won't be coming back for seconds.
Posted by Amanda at 8:47 PM No comments:

An Artist in the Floating World 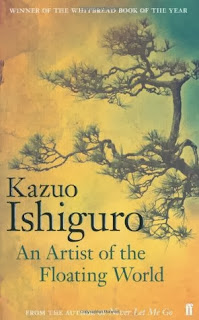 An Artist of the Floating World

In An Artist of the Floating World, Kazuo Ishiguro offers readers of the English language an authentic look at postwar Japan, "a floating world" of changing cultural behaviors, shifting societal patterns and troubling questions. Ishiguro, who was born in Nagasaki in 1954 but moved to England in 1960, writes the story of Masuji Ono, a bohemian artist and purveyor of the night life who became a propagandist for Japanese imperialism during the war. But the war is over. Japan lost, Ono's wife and son have been killed, and many young people blame the imperialists for leading the country to disaster. What's left for Ono?

My Review
I've finally added Kazuo Ishiguro as a favourite author. I feel I should have when I read Never Let Me Go but I have yet to finish the book review for that one. So why am I writing this one first? I think it's because the other effected in a way I couldn't quite describe but this book feels more comfortable. The more I read of Ishiguro, the more I fall in love with his form of the written word.

I'm really not so sure this book is about post war Japan as it is about frailty and the weakness of pride. Told in a conversational way with occasional flashbacks to earlier times and conversations Masuji Ono sometimes let slip the pride he felt in being a propaganda artist. It's not until he is rebuffed by a former student and reminded of his duties to assure his daughter a good marriage match that it begins to dawn on him that his memories may be faulty. He soon realizes he may also have been wrong.

This is written so subtly that you, along with Masuji Ono, arrive at this at about the same time. You are allowed to make mistakes and learn from them if you confront them. This book has lessons but none of them are taught with force. I think I like learning that way.
Posted by Zorena Deckard at 9:00 AM No comments:

The Curious Incident of the Dog in the Night-Time 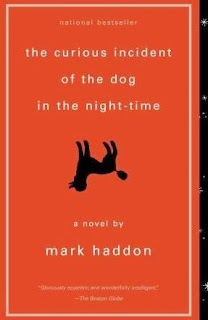 The Curious Incident of the Dog in the Night-Time

Christopher John Francis Boone knows all the countries of the world and their capitals and every prime number up to 7,057. He relates well to animals but has no understanding of human emotions. He cannot stand to be touched. And he detests the colour yellow.

What starts as a minor mystery ends up becoming a long and eye opening journey for 15 year old autistic, Christopher. While his autism isn't the main theme of the book it does play into how he interacts with the world around him. Reading this book really helped me understand the mindset of Asperger's Syndrome a lot more.

The story is told from Christopher's perspective which includes his likes and dislikes, dogs, math, prime numbers, Sherlock Holmes, and how he basically copes with his phobias. Some of the saddest and funniest parts of the story are caused by him being too literal minded. Most of which help to identify with and like Christopher that much more.

If you're looking for a mystery you might well look to a different book but if you want an interestingly written story of an odd coming of age then I highly recommend this one.

Posted by Zorena Deckard at 9:00 AM No comments: