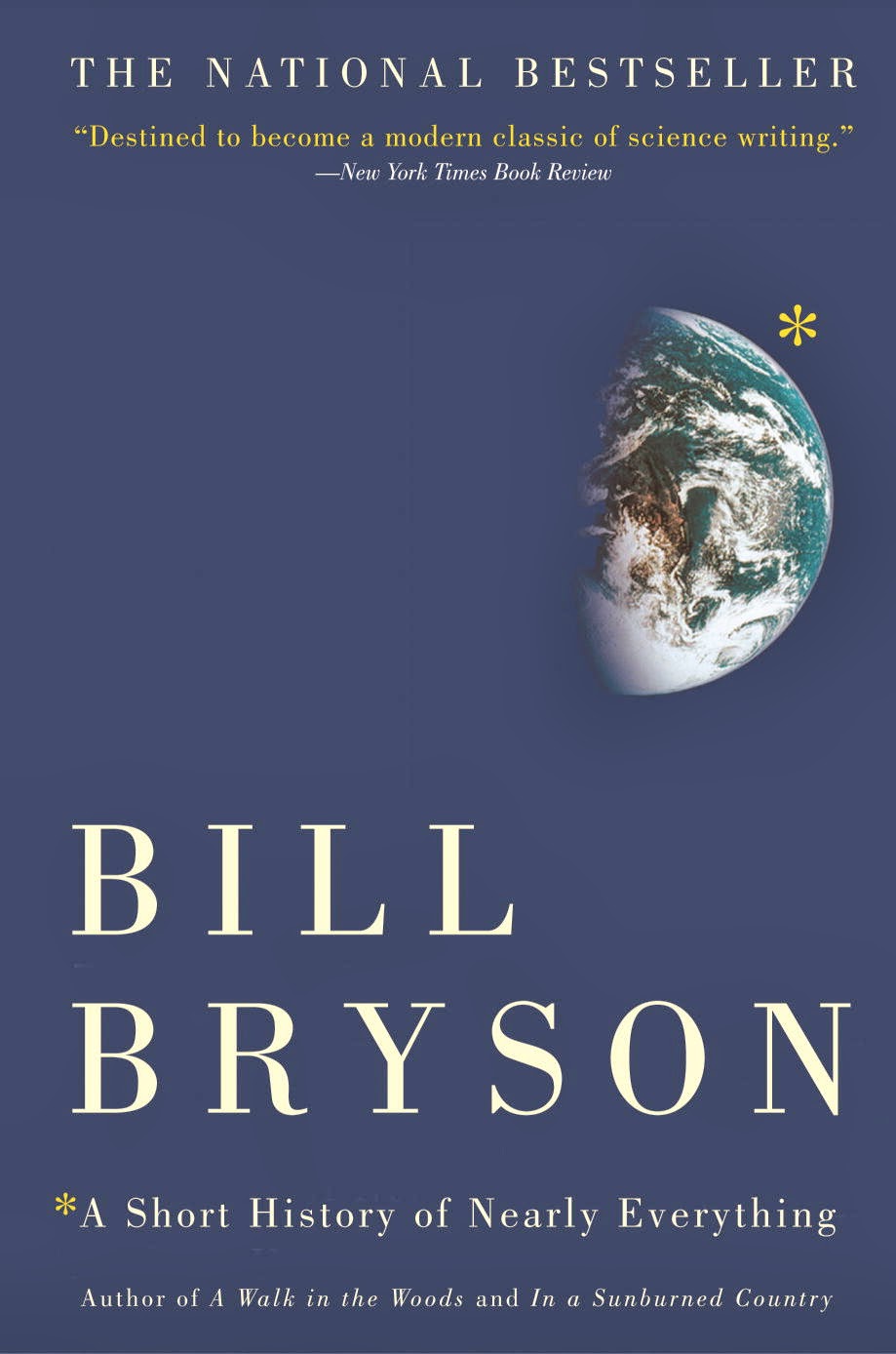 A Short History of Nearly Everything by Bill Bryson
2003
Reviewed by Diane K. M.
My rating: 4 out of 5 stars


I must admit that science is not my strong suit -- I've always been more of a Humanities gal. In high school, I had to work harder in my biology and chemistry classes, whereas English, history and social studies always came more easily to me.

Bill Bryson's "A Short History of Nearly Everything" is a good overview of all the science classes I didn't take (or don't remember) in college. It's like Intro to Physics, Chemistry, Geology and Astronomy all in one wonderfully droll book. Since I read very few books about science, this was an enjoyable departure for me.

Here is how the book begins: "Welcome. And congratulations. I am delighted that you could make it. Getting here wasn't easy, I know. In fact, I suspect it was a little tougher than you realize. To begin with, for you to be here now trillions of drifting atoms had somehow to assemble in an intricate and curiously obliging manner to create you. It's an arrangement so specialized and particular that it has never been tried before and will only exist this once. For the next many years (we hope) these tiny particles will uncomplainingly engage in all the billions of deft, co-operative efforts necessary to keep you intact and let you experience this supremely agreeable but generally under-appreciated state known as existence."

Some of my favorite sections were about the Big Bang, the debate about the age of the universe, plate tectonics, Darwin's research, and the extinction of different species. After sharing various stories of how humans have killed off who-knows-how-many species, Bryson interjects: "I mention all this to make the point that if you were designing an organism to look after life in our lonely cosmos, to monitor where it is going and keep a record of where it has been, you wouldn't choose human beings for the job." Sadly true, but also worth a HA!

I listened to this on CD read by the author, and if you've been following my reviews for a while, you'll know that I have a brain crush on Bryson and his narration. Seriously, I wish I could invite him over for tea and scones and just listen to him read all afternoon. (Bryson is from my home state of Iowa, but he's lived in England for so long that he's adopted a charming accent. It's adorable.) I was also able to look through a copy of the special illustrated edition, which includes dozens of photographs and prints. If you can find it, I highly recommend reading the illustrated edition.

"A Short History" was first published in 2003, and at the time, it was a big change from Bryson's previous travelogues. Since then, Bryson seems to have abandoned travel books and has been writing on different topics in history, such as the wonderful "At Home", "Shakespeare" and "One Summer: America 1927." While I enjoy his wry, humorous takes on history, I do miss his travel writing. If you're reading this, Bryson, please, take a trip somewhere. Have an adventure. Take a few notes and write another whip-smart travel book. Your fans will love it.
Posted by DianeLibrarian at 6:00 AM No comments:

Early Autumn by Robert B. Parker
My rating: 4 of 5 stars

When Spenser is hired by a divorcee to bring back her kidnapped son from his father, he gets more than he bargained for. Paul's parents are using him as a pawn and neither really want him around. Spenser winds up taking the kid under his wing and soon has someone gunning for him...

Of the Spensers I've read so far, this one is in the top three. While it has all the Spenser hallmarks, like a long description of cooking a meal, wisecracks, discussions of Spenser's code, and Hawk being the baddest mother since Shaft, it also has an offbeat plot. When Spenser sees what a callow slacker Paul is and decides to mentor the kid, the book starts firing on all cylinders.

Paul's parents are both human garbage and deserving of kicks to the crotch. Paul and his attitude irritated the crap out of me (and Spenser) at the beginning but the kid grew on me toward the end. Hawk was in fine form, although I could have used a little more of him. I still can't decide if Parker includes Hawk as a mirror to hold Spenser up against or someone to do his dirty work. Possibly a combination of both. Susan Silverman was more tolerable than usual but I found her jealousy and bitchiness toward Spenser spending time with Paul kind of juvenile.

The book shows its age a little but not enough to cost it any stars. It's clear the book was written in the early 80's with its references to self-actualization and disco. Also, Paul would be on the internet or playing video games all the time if it were written today.

This Parker guy might have a future in the book business. I'll pick up the next one. Four out of five stars.

The Bird Eater by Ania Ahlborn
My rating: 3 of 5 stars

His life in shambles, Aaron Holbrook returns to his home town to the house he grew up in, which also happens to be the house his aunt was murdered in. His plan is to rehab the house and sell it. Too bad The Bird Eater has other plans...

I got this as part of the Kindle First program.

The Bird Eater reminded me a lot of the Anne Rice Mayfair Witches series, which is high praise since I think The Witching Hour was the last good book Anne Rice wrote. The Holbrook House has been haunted by a ghostly twelve or thirteen year old boy, the Bird Eater of the title, for generations.

This is one creepy book. Aaron moves into the house and Birdie starts tormenting him from the start. Without giving too much away, Aaron's condition degenerates even as he reconnects with friends from his youth, Eric and Cheri, his first love.

While I enjoyed the story, it wasn't a fun read by any means. The creepiness was offset by the bleakness, which sucked the enjoyment out of it for me. I really felt bad for Cheri, particularly has her heart was torn to pieces as Aaron slid further into madness.

That's about all I can tell without giving away all the best bits. It was a chilling read and will be of interest to anyone who likes stories featuring creepy kids. 3.5 out of 5 stars.