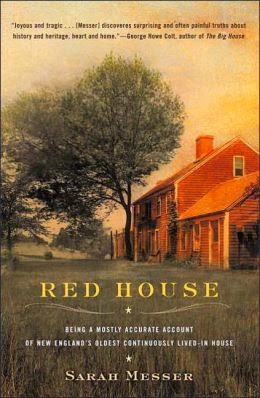 This was a mixed bag for me. It's half-memoir, half-history, and I much preferred the memoir part.

Sarah Messer grew up in a centuries-old "red house" in Marshfield, Massachusetts. Her father bought the home in 1965 from a descendant of the original owner, Walter Hatch, who reportedly built the house in 1647. The house was given a patchwork of renovations and over the years, and parts of it were in danger of falling down.

Hatch's will stipulated that the house should never leave the family, but for various reasons, Messer's father was able to buy the home, despite not being a relation. Messer alternates the chapters between her experiences of living in the house and the home's history, which she pieces together through documents.

The colonial history was a bit dry and required a fair amount of skimming to get through. By coincidence, I had recently read another book about Americana, Jill Lepore's "Book of Ages," which handled the history aspect more gracefully than "Red House."

My favorite parts of the book were Messer's childhood memories in the old house and how, as an adult, she and her siblings made efforts to repair and renovate it. There were also some great stories about ghosts who haunted the house, and how Messer herself talked to one of them in her sleep one night. Chilling!

I picked up this book after reading an interview with the author Elizabeth McCracken, who said this is one of her favorite books. While "Red House" won't be a favorite, I did enjoy it and would recommend it to anyone who likes reading about the history of old buildings.
Posted by DianeLibrarian at 6:00 AM No comments:

The List of Seven by Mark Frost
My rating: 4 of 5 stars

Arthur Conan Doyle, doctor and aspiring author, witnesses black magic and murder at a seance. Soon, he finds himself on the run with Jack Sparks dragging him along. But is Jack Sparks an agent of the crown or an escaped mental patient? And why does a mysterious group want Doyle dead? And who are the people on the List of Seven?

A friend of mine started bugging me to read this in 2004. A decade later, I finally gave in.

The List of Seven is a Sherlock Holmes pastiche written by one of the co-creators of Twin Peaks, Mark Frost. It reads like Tim Powers writing an episode of Sherlock. In fact, I kept imagining Benedict Cumberbatch as Jack Sparks and Martin Freeman as Doyle.

Sparks and Doyle prove to be an effective team. I found Sparks' background incredibly interesting, as I did his sociopathic brother, Alexander. Doyle was a little more capable than Watson is normally portrayed, a master of deduction rivaling Jack Sparks.

This is a throwback to early steampunk, not the style over substance steampunk that's so popular these days. There are appearances by Victorian figures like Bram Stoker, Nigel Gull, and Queen Victoria, and also trains, mummies, zombies, and various other Victoriana, like seances and mediums. Again, it reminds me of Tim Power's Anubis Gates and other works, and also Jonathan Barnes' The Somnambulist and The Domino Men.

The writing itself was pretty good. There was a surprising amount of humor in the dialog. The plot about the cult was nothing spectacular since most cults in fiction have the same goals. The characters of Arthur Conan Doyle, Jack Sparks, and Alexander Sparks eclipsed the plot somewhere around the halfway mark.

If I had to complain about something, it would be the ending, which seems like it was probably changed at some point in the writing process to allow for sequels. It was kind of a copout. Other than that, I have no complaints. Four out of five stars.

A Simple Plan by Scott B. Smith
My rating: 4 of 5 stars

Hank and Jacob Mitchell and Jacob's friend Lloyd find a crashed plane in the woods. The pilot is dead but he has a duffel bag with 4.4 million dollars in it. The three men agree to sit on the money until they're sure no one is looking for it. But can they keep their mouthes shut? And what will happen when someone talks?

A Simple Plan is the story of three men in a difficult situation that quickly escalates into violence. The underlying theme seems to be how one lie inevitably leads to one more.

The main characters are fairly complex. Hank wants to protect his brother but also wants the money. Jacob wants to buy back his parents' farm with the money but he also wants to please his brother. Lloyd needs the money to pay back some gambling debts and can't wait six months. See where this is going?

Once things start going off the rails, they continue going off the rails for the rest of the book. The first murder is just the tip of the bloody iceberg. How much killing does it take to cover up one murder? Quite a few, it turns out.

Scott Smith's writing packs quite a punch. It's a cut above most thrillers and really makes me wish he wrote more than just this and The Ruins. Much like the Ruins, I wasn't sure how any of the characters would live much longer at the 50% mark.

The series of revelations near the end spell out the book's message: Crime doesn't pay. If I ever find a bag of money in the woods and I have people with me, we're turning it in to the cops. Alone, I could probably handle it...

Four out of five stars. Where's the next book, Smith?