THE IPCRESS FILE BY LEN DEIGHTON

The Ipcress File by Len Deighton
My rating: 4 of 5 stars

”Weapons aren’t terrible,” I said. “Areoplanes full of passengers to Paris, bombs full of insecticide, cannons with a man inside at a circus--these aren’t terrible. But a vase of roses in the hands of a man of evil intent is a murder weapon.”

The protagonist of this novel is nameless. Though there is a moment in the novel when someone whispers:

Now my name isn’t Harry, but in this business it’s hard to remember whether it ever had been.

When the producers and directors met with Michael Caine about making the movie version they decided that they had to refer to the protagonist by some sort of name so Caine christened him Harry Palmer. Later in this series of novels “Harry” is referred to as “Charles”. Neither of them are of course his real name.

We know that he used to work in military intelligence, but has recently been put in charge of a small agency called WOOC(P) which is so secret that no one seems to even know what the acronym stands for. He has a very efficient secretary suffering/benefiting from OCD named Alice who is always trying to get him to be more tidy with his files. He is always teasing her with jibs like: ”Your seams are crooked.” He requisitions an attractive female assistant, since Alice doesn’t seem to find him even remotely attractive, and no one is more amazed than he is when she shows up.

”She was wearing that ‘little black sleeveless dress’ that every woman has in reserve for cocktail parties, funerals and first nights. Her slim white arms shone against the dull material, and her hands were long and slender, the nails cut short and varnished in a natural colour. I watched her even, very white teeth bite into the croissant. She could have been the top kick in the Bolshoi, Sweden’s first woman ship’s captain, private secretary to Chou En-lai, or Sammy Davis’s press agent.”

The lovely Sue Lloyd is Jean in the movie version. I have such fond memories of watching her star on the TV series The Baron with Steve Forrest.

Her name is Jean Tonnesson and she falls for “Harry’s” snarky charm and is soon providing him with stimulation like a secretary on Mad Man. He might be swapping fluids with her, but he still doesn’t trust her. There is something not to be fully understood about her and “Harry” has a natural distrust of everything.

“Harry” has a daily rondevu in a seedy London business to fetch a particular envelope. He reseals the money and fake passports into another envelope and mails it to himself again. He is prepared for something to go disastrously wrong every day.

”It doesn’t take much to make the daily round with one’s employer work smoothly. A couple of ‘yessirs’ when you know that ‘not on your life’ is the thing to say. A few expressions of doubt about things you’ve spent your life perfecting. Forgetting to make use of the information that negates his hastily formed by deliciously convenient theories. It doesn’t take much, but it takes about 98.5 per cent more than I’ve ever considered giving.”

In other words “Harry” is a complete pain in the ass.

He is invited to attend an atomic bomb weapons test event by the US government on an atoll in the Pacific. “Harry” is kidnapped and subjected to cold war brainwashing which was of particular interest to the author Len Deighton. When he escapes instead of finding himself in some desert hellhole, he discovers that he is within walking distance of London. It seems there has been a double cross or a triple cross or maybe just your standard diabolical attempt to infiltrate and take over the British government. Someone is kidnapping top level scientists and brainwashing them. But to what end? And why attempt to brainwash poor “Harry”?

Len Deighton pulled that rug off his head and pulled it over all our eyes.

It is all rather confusing. In fact the whole plot of the novel is completely unfathomable. When Len Deighton approached Ian Fleming’s publisher they asked him to simplify the plot and bring it back. He refused and took the book to a rival publisher who accepted the novel as written. The editor over there must have been cockeyed, cross-eyed, inebriated, or merely brilliant because the book though proving so puzzling to readers somehow became a huge success.

Kingsley Amis famously weighed in with it is "actually quite good if you stop worrying about what's going on".

And that is the key, when I finally let go and quit trying to figure out exactly what was going on I started to really enjoy the writing. Deighton expects a lot of his readers which is probably why his novels have fallen out of favor these days. The asides though witty are reasonably obscure. It is all lost in translation from the mind of Deighton into English. I’m sure this book made perfect sense to him or it is all one elaborate ruse on the reading public.

”--Aquarius (Jan. 20-Feb. 19). A good week for your hobbies and romance, but you can expect some difficulties with evening arrangements. Forthright talking may well clear the air.--”

Maybe the cipher for the plot resides in the horoscopes.

Regardless of being befuddled for most of the book I ended up absolutely enjoying the ride. The wit, the charm, and the snarky irreverent behavior of “Harry” kept the pages turning and a smile on my face. Sometimes we just have to let go of the rigid confines of a definable plot.

I have the 1965 film on order which I hear is excellent and not confusing at all. I really can’t recommend this book except to the hardiest of Cold War fans. I find it utterly fascinating that the British public made this book a bestseller and Deighton a literary star. In for a penny in for a pound I’m definitely reading the second book in The Secret File series called Horse Under Water. Maybe Deighton will start to make sense or I will just have to accept that sometimes the insensible can still be entertaining. 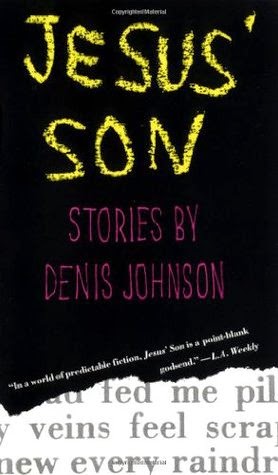 
Jesus' Son, the first collection of stories by Denis Johnson, presents a unique, hallucinatory vision of contemporary American life unmatched in power and immediacy and marks a new level of achievement for this acclaimed writer. In their intensity of perception, their neon-lit evocation of a strange world brought uncomfortably close to our own, the stories in Jesus' Son offer a disturbing yet eerily beautiful portrayal of American loneliness and hope.


I wasn’t sure if I would like this collection of loosely connected stories about a young guy who is addicted to drugs, sometimes homeless, sometimes employed, and occasionally steals. He’s not an especially likable character, but I enjoyed being a part of his thoughts, his views, and his haphazard journey through life. Maybe it's because I have empathy for addicts and others who live on the edge.

This powerful and gripping collection of stories was troubling, intense, and humane. I was overwhelmed by its beautiful language and poignant passages.

One of my favorite stories in this collection is Dirty Wedding, a sad and unsettling little story about abortion, loneliness, heroin addiction, and death.

“The wheels screamed, and all I saw suddenly was everybody’s big ugly shoes. The sound stopped. We passed solitary, wrenching scenes. Through the neighborhoods and past the platforms, I felt the cancelled life dreaming after me. Yes, a ghost. A vestige. Something remaining.”


Beverly Home was sad, a little humorous, and very hopeful. The young narrator finds a part-time job in a nursing home, spies on a Mennonite couple in their bedroom, and begins a life of sobriety.

“All these weirdos, and me getting a little better every day right in the midst of them. I had never known, never even imagined for a heartbeat, that there might be a place for people like us.”


in no particular order:


The Story of Harold by "Terry Andrews"


life is all small moments, that’s what’s important, all those mundane moments that accumulate and create a life, a good life – life is good, it really can be! – you didn’t expect the novel to take a breath and suddenly affirm life –


Miracleman Vol. One by Alan Moore


Here be dragons, and unexplored territories - at least in 1985, before Watchmen. Alan Moore Had his ideas and themes already perfectly formed, his darker directions already mapped out. His smart deconstruction and reconstruction of comic tropes and hero archetypes never blunt his story's visceral shocks or disguise its messily emotional foundation. The dialogue and narration move from angst-filled realism to surreal poetry. His Miracleman moves from knowable to unknowable.


I can't explain why I love someone. I can explain the things I like and love about them, the details... but explain the love itself? who can do that? I think love is one of the unexplainable things in life. it can't be quantified.


this is a wonderful novel about figuring out that who you are does not equal your job or your birth name or any specific, singular role or title; rather, it is the sum of all such things, and your experiences, and your internal workings, your actions and your potential, your ability to change or not change, and so much more. you = not easily summed up in one word.


The Man from Primrose Lane by James Renner


when it comes to love and other obsessions, "yesterday" and "tomorrow" are mere constructs


a meditation on loss. it is bleak and beautiful; a tall drink of icy cold water; a dark, sad dream of a book.


Butler correctly assesses humanity's tragic flaw: a genetic tendency towards hierarchism at every level. a flaw that on the micro level leads to an inability to form relationships based on equality - and in the macro, one that could easily lead to the end of humanity's home world as they know it. oh, humanity.


Lucia in London by E.F. Benson


Has fair Riseholme itself been superseded? It cannot be! Well, as we sort out this dreadful mystery, at least we are still able to sit back and enjoy Lucia make short work of London's tarsome social mores and strictures. No one knows how to climb more swiftly than Lucia!


who is this new Miranda who has seen death up close, who has lived and loved and lost and died and been reborn... who has made death her friend? why, she has become Katherine Anne Porter, of course.