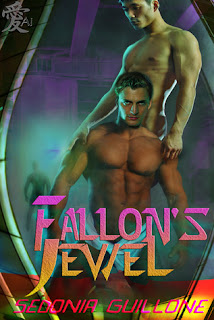 
Kenji doesn’t know who he is or where he came from, only that he woke up one day, naked and alone on Terran A, possessing nothing in the world but a golden statue. All he knows is his survival, hosting roughnecks in Spike’s bar for a living. The one bright spot in his life is Jake Fallon, a cop with Interstellar Patrol. Though Fallon is only another customer, Kenji senses something different about him, something that inspires Kenji to trust Fallon with his body and his life. When Kenji is attacked and pursued by a vicious bounty hunter one night, Fallon also becomes his only hope.

Fallon’s passion for Kenji mixes with his desire to rescue the beautiful man from danger. He’s already more than half in love with Kenji and falling deeper as the bounty hunter’s pursuit takes them from galaxy to galaxy. For the first time since his first partner was killed, Fallon dares to surrender his heart again. However, as their race for survival uncovers Kenji’s true origins, Fallon may have to let Kenji go in order for Kenji to fulfill the very purpose of his existence…


When he was just 12 years old, Kenji fell from the sky. Before he hits the ground, a military man saves him. Though Kenji never saw the man’s face, he never forgot his voice or the feel of his arms around him. Years later, while serving the rough patrons drinks at Spike’s Bar, Kenji has no memory of his life before.

Kenji still has vague memories of the man who saved him and often has strong visions and dreams that affect him physically and emotionally. When he meets Jake Fallon, an Intergalactic Space Patrol (ISP) officer, at the bar, he is immediately taken by the man and feels inexplicably safe with him. Jake is equally attracted to Kenji even though he is still grieving the loss of his partner and lover. Though they have sex early on, their emotional connection is deep. Kenji makes Fallon feel alive again and Fallon makes Kenji feel protected.

As Kenji and Fallon gradually unravel Kenji’s past, it is not long before Kenji is in danger with a vicious bounty hunter on his trail. And that is only the beginning of his troubles.

I know amnesia plots are a bit cliché, but I rather liked the way it was done here. Kenji’s amnesia wasn’t caused by a bump on the head; his memory was deliberately erased. When Kenji starts to regain his memories, he retains his kind nature, but reveals another stronger side of his personality and his ability to “see” becomes more pronounced.

I loved this gripping, fast-paced, and very romantic space opera. It was as comforting as a steaming mug of hot chocolate.
Posted by Nancy at 2:37 PM No comments: