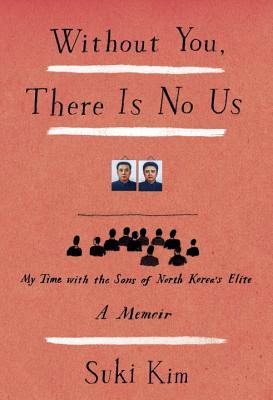 This was some incredible and dangerous reporting. Suki Kim pretended to be a Christian missionary so she could teach English at a prestigious university in North Korea. Yeah, that's right — she went undercover in the country that hates Westerners and puts political prisoners in a gulag.

North Korea is such a fascinating place. Every book I read about that regime only feeds my curiosity. This memoir was a nice addition to the field because of Kim's reporting. She took extensive notes during her stay, but she had to do it secretly because her evangelical colleagues thought she was just a novelist who wanted to teach.

Kim taught at the all-male Pyongyang University of Science and Technology (PUST) for two semesters in 2011. The school was funded by missionaries, even though the teachers were not allowed to discuss religion or Christianity with the locals. Many of Kim's students came from elite families and spoke good English, but they were suspicious of foreigners. Kim was born in South Korea, and she wrote that her ability to speak Korean helped her win the trust of some of her college students.

Kim and her fellow teachers were constantly monitored and followed wherever they went, and they were only allowed to leave the campus when given special permission. Even visits to historical sites were tightly controlled outings, with no freedom of movement or speech. Kim said the college was like a prison, and she felt very isolated and lonely during her time there.

"Time there seemed to pass differently. When you are shut off from the world, every day is exactly the same as the one before. This sameness has a way of wearing down your soul until you become nothing but a breathing, toiling, consuming thing that awakens to the sun and sleeps at the dawning of the dark. The emptiness runs deep, deeper with each slowing day, and you become increasingly invisible and inconsequential. That's how I felt at times, a tiny insect circling itself, only to continue, and continue. There, in that relentless vacuum, nothing moved. No news came in or out. No phone calls to or from anyone. No emails, no letters, no ideas not prescribed by the regime ... Locked in that prison disguised as a campus in an empty Pyongyang suburb, heavily guarded around the clock, all we had was one another."

The book is told in mostly chronological order of Kim's time at the school, with some personal flashbacks and historical details of Korea. The teachers were given a long list of rules to follow while in North Korea. Things like: Don't discuss politics. Don't brag about your own culture. Don't say anything negative about Kim Il-sung or Kim Jong-il. Don't wear jeans or flip-flops. Don't pray at meals. Don't start conversations with the locals. Don't ask questions about the government. Also, bring lots of flashlights and batteries because the electricity is frequently out.

Suki Kim was nervous when she met her students, and was always anxious that she would slip up and say something she shouldn't. Each assignment she created had to be approved by the local administration, which caused more anxiety.

It turned out that Kim was in North Korea at an interesting time. The other universities were all shut down and the students were sent to do construction work. However, the elite students at PUST were exempt from this manual labor, for some reason. And then, at the very end of the author's stay in Pyongyang, Kim Jong-il died, which caused much grief for her students. At the time, she hoped that things would improve for the citizens of North Korea, but she was also pessimistic about the fierce control of the regime.

"Being in North Korea was profoundly depressing. There was no other way of putting it. The sealed border was not just at the 38th parallel, but everywhere, in each person's heart, blocking the past and chocking off the future. As much as I loved those boys, or because of it, I was becoming convinced that the wall between us was impossible to break down, and not only that, it was permanent."

This memoir is not perfect; Kim's comments about her boyfriend were distracting, and she would constantly waver between trying to teach her students about the outside world, and then fearing that anything she told them would put them in danger. The back-and-forth about sharing Western ideas and then worrying for the kids happened a few too many times.

But overall, this was a fascinating read. I appreciated that she shared her own family's story and what her mother experienced when the Korean war started. Kim also included good details about Korean culture and history, which provided context for what she experienced there.

In the end, she knew her book would anger the regime and the people who worked at PUST. In her author's note, she wrote that she felt an obligation to tell the "stark truth" about North Korea, and she hopes that the lives of its people will one day improve. I would highly recommend this memoir.
Posted by DianeLibrarian at 6:00 AM No comments:

The Likeness by Tana French
My rating: 4 of 5 stars

After the evens of In the Woods, Cassie Maddox is struggling to get her life back together. When a woman resembling her is found with an ID bearing the same name Cassie used in an undercover case years before, Cassie is thrust into a life that isn't her own in an effort to find out who killed the woman with her face...

The Likeness was a tough nut to crack. The setup is fairly preposterous and was a big hurdle to overcome before I could dig into the book and enjoy Tana French's superb stylings. A woman pretending to be another woman that looks just like her in an effort to find out who killed her? Is this an episode of The Bloodhound Gang I missed?

Once I got over my initial misgivings with the setup, I enjoyed The Likeness immensely. I still loved Cassie from Operation Vestal so I was already invested in the story. Tana French is no slouch, either. Just as in In the Woods, she crafted a great cast of characters. As Cassie's identity eroded and merged with Lexie's, I have to admit that I didn't blame Cassie for getting attached to Lexie's friends and their relationship.

There were some tense moments on the road, like every time Cassie/Lexie slipped up. I had no idea what actually happened to Lexie until it was spelled out for me, nor did I guess the identity of the father of her baby.

Cassie's relationships with Sam and Frank were also one of the more interesting parts of the book. French could have easily glossed over some of those details but I'm glad she didn't. French creates some of the richest characters in crime fiction. I still wish things would have went differently with her and Rob in In the Woods, though.

Four out of five stars but French had to work harder for that fourth star than she did in In the Woods. Luckily I've got the next Dublin Murder Squad book on deck.