★ ★ ★ ★
China Mountain Zhang is an impressive work, well deserving of its Hugo and Nebula nominations and its Tiptree and Lambda awards. Thoughtful, precise writing and Zhang’s fully developed characterization make this a stand-out read, with only overall structure and the subject of one point of view preventing me from awarding a full five stars.

Setting is thoughtfully built; information about society is shared indirectly through character experience. China appears to be the dominant world power after the economic collapse of America and a subsequent socialist revolution. Naturally, a change in social order accompanies the shift, and China-born Chinese are at the top, followed by the ABCs (American-Born Chinese), and then the non-Chinese. In this distant future, bio-engineering has progressed enough that people can go in for genetic re-engineering. Everyone has an implanted machine interface/implant that not only provides personal information on demand but allows people to link their nervous system into computer systems. Mars has been colonized, overcrowding is a serious issue, and like many visions of future bureaucracies, getting a job or housing is almost impossible without connections or money.

One of the strengths of the book is fabulous characterization. Interestingly, in the beginning, I found the character China Mountain Zhang hard to like. A bit immature, he spends most of his time at work, with a friend, Peter, or at the flier races. Zhang is of mixed race, Hispanic and Chinese, but since his parents paid for genetic engineering when he was young, he appears to be full-blood Chinese. Born in Brooklyn, he has remained a New Yorker even after his father has left for California and his mother for Pennsylvania. His first challenge comes from his Chinese boss, who wants to introduce Zhang to his unmarriageable daughter. Issues of respect, his boss’ economic power over him and a Chinese emphasis on ethnic purity are a delicate dance to negotiate, particularly because Zhang is gay. Although New York gay culture is lively, being ‘bent’ is technically forbidden, and in China is likely to merit the firing squad. I found Zhang’s management of the his boss and the daughter somewhat immature, but appreciated it later as contrast for his personal development.

Zhang wrestles with emotional issues on a ‘date’ with malformed San-xiang:
This is a night she will remember all her life, the night when she went to the kite races. How many nights do I remember? How many special nights have I had in my life? Is it so much to give up a night?
‘Let’s get something to eat and then see how late it is, maybe stop in for a drink,’ I say. She smiles up at me. Oh, the dangers of pity.

The writing shines. McHugh negotiates the world through her characters, and the clean prose captures Zhang’s voice well, along with the voices of the colonists. Sophisticated philosophical and emotional truths are communicated in Zen-like essence. San-xiang, the boss’ daughter, shares a personal insight and the emotional core of the book:
“‘I used to think I was unhappy because my father was in trouble and we had to come here, but now I don’t think it makes any difference. If you’re a certain kind of person, you’ll be unhappy wherever you are.’
I have no doubt she considers herself that certain kind of person…
It doesn’t make any difference if you did or you didn’t,’ [go to China] she says, ‘because you would still be you. And if you were unhappy here, you’d be unhappy there.“

Zhang at dinner with his mother encapsulates years of history in one short meal:
“‘It’s a lie,’ I say, ‘and you always told me that a lie always creates complications.’ But my face is a lie as well, and she condoned that. I am sure she hears the accusation, but we never talk about my mother’s contradictions.
She does not touch me, although for a moment I think she is going to cover my hand with hers and I am afraid.“

My trouble with the structure of China Mountain Zhang is not the writing, nor the characters. In her post on Tor, writer Jo Walton calls the style of China Mountain Zhang a ‘mosaic novel,’ and goes on to call it one of the best mosaic novels ever written. After doing a little research on the term, I’d have to disagree with her; interestingly, my difficulties with the book are same reasons it doesn’t quite work as a mosaic.  The term ‘mosaic novel’ refers to a collection of stories “with the aim of telling a linear story from beginning to end” despite each individual chapter reflecting multiple viewpoints or styles (sadly, at least according to academia, I’m quoting Wikipedia here). Much like it’s visual art equivalent, intention is to create an uniform whole out of individual pieces.

However, the undeniable focus of the book is Zhang, both in title and subject. In a linear timeline about a decade long, we follow Zhang through a significant emotional and professional development. Out of a multitude of chapters, there are only four where he is on the periphery, guest appearance only: a story about a cyber-kite flier, Angel; one centering on an ‘ugly’ Chinese woman, San-xiang, who seeks genetic modification; and two set on Mars, one focused on each member of a farming collective couple, Martine and Alexi. The flier’s story is interesting, but thematically peripheral. The Martian couple’s story collective story gives insight into the new society and is satisfactorily self-contained. San-xiang’s explores issues attractiveness post-genetic modification. Given that the title is the main character’s name, and the bulk of the collection is focused on Zhangs’s viewpoint, growth and experience, as a book it doesn’t quite achieve the goal of the mosaic, but also falls strangely short of linear narrative.

My one other concern is (hidden after the break) 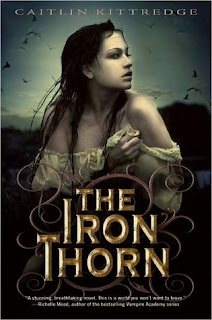 The Iron Thorn
by Caitlin Kittredge

In the city of Lovecraft, the Proctors rule and a great Engine turns below the streets, grinding any resistance to their order to dust. The necrovirus is blamed for Lovecraft's epidemic of madness, for the strange and eldritch creatures that roam the streets after dark, and for everything that the city leaders deem Heretical—born of the belief in magic and witchcraft. And for Aoife Grayson, her time is growing shorter by the day.

Aoife Grayson's family is unique, in the worst way—every one of them, including her mother and her elder brother Conrad, has gone mad on their 16th birthday. And now, a ward of the state, and one of the only female students at the School of Engines, she is trying to pretend that her fate can be different.

There's a lot going on in this book. The setting is unusual. Steampunk, in 1950s America. It's set in a city called Lovecraft (Boston, I think), which is, appropriately, infested with horrible things that would be at home in one of Lovecraft's stories. But they aren't supernatural, of course. That wouldn't be rational. Instead, the creatures that stalk the city of Lovecraft, ghouls, nightjars, and springheel jacks alike, are people infected by the necrovirus. Some infected turn into bloodthirsty creatures, and others go mad. Like Aoife's mother, and brother, and, in time, probably herself. All of this is set up in just the first 50 pages, and it only gets more complicated from there. So many writers wouldn't have been able to handle such a huge, complicated system of ideas. But Kittredge is able to weave it all together into an easily comprehensible, complete world. And although she can't entirely avoid infodumping, she does it as little as possible, and spreads the exposition through the book.

There's also a good cast of characters. Aoife is a good narrator, bright, capable, and with the best of motivations throughout the book: her family and friends. At no point did I find her thoughts or actions unbelievable or inconsistent with her character. Her growing relationship with Dean didn't take over the book, because she had more important things to worry about, and the trajectory of it was plausible to me. I also liked her friendship with Cal. Kudos to Kittredge for giving Cal the sort of casual, paternalistic brand of sexism that I'd expect to see out of characters from the 50s, without letting it turn Cal into a villain or even an unsympathetic character. Hard balancing act.

My one small complaint about the book is that there's so much exposition at the front, out of necessity, that the first half drags a bit. But once the world's been set up, it's a much quicker read. It's the one thing that kept me from loving this book entirely. Since so much has already been established, I expect that the other two books in the series will have less of that. And the ending is enough of a game-changing cliffhanger that I'm eager to read them.