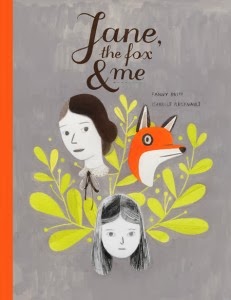 Jane, the Fox & Me by Fanny Britt, Isabelle Arsenault, Christine Morelli
2013
Reviewed by Diane K. M.
My rating: 4 out of 5 stars

"Jane, the Fox and Me" is the story of Helene, a young girl who is shy and lonely and is being bullied by a group of mean girls at school. They make fun of her weight and taunt her about not having any friends. Helene's one source of comfort is reading the book "Jane Eyre," which she carries with her every day. She burrows into it on the bus as a way of blocking out the awful things the other kids say.

Things come to a crisis when Helene has to go on an outdoor field trip with her class, and even though she tries to avoid the bullies, they still make fun of her. Luckily, a kind girl befriends Helene and she suddenly has someone to talk to.

The drawings are gorgeous. The stark scenes with the mean girls are in black, white and gray, but whenever Helene is reading her precious book or is being imaginative, beautiful colors emerge. I especially loved the reddish-orange color of a fox Helene sees in the woods, and the rich blues and greens of the watercolors after Helene has found her friend.

Technically this book is for young adults -- it was honored as as one of the 10 Best Illustrated Children's Books by The New York Times Book Review -- but I think adults would also appreciate this bittersweet story. Highly recommended.
Posted by DianeLibrarian at 6:00 AM No comments:

Cruelty by Edward Lorn
My rating: 4 of 5 stars

In episode three of Cruelty, things move right along. We find out who was in the freezer at the bait shop, what the point is of Cruelty's actions, and just how deep in the shit Will Longmire and the rest of the cast are in. It feels very much like the third episode of a television show, complete with the agonising wait until the next episode.

Ever time I read an Edward Lorn story, I get smacked in the head with how clever his writing is. Lots of colorful metaphors and clever but still realistic dialogue. Also, he has the sense to hire an editor. Like I've said several times before, this is self-publishing done right.

Threatening to punch an author in the junk seems to work wonders. Not only did Edward Lorn trot out the third episode in short order, he also mentioned my threats of genital harm in the introduction.

The Ruins by Scott B. Smith
My rating: 4 of 5 stars

When four American college students and a German tourist go on a foray into the Mexican jungle, searching for the German's missing brother, they have no idea of the horror they will find themselves entangled in. Will any of them leave the jungle alive?

I was in the mood for some horror and received recommendations for this book from two highly regarded reviewers. I'm proud to say Kemper and Trudi weren't wrong.

The Ruins is the story of five people who make a serious of questionable choices and wind up trapped on top of a hill with a killer vine terrorizing them. It reminded me of The Troop quite a bit in the way the relationships disintegrated as supplies ran low and the vine got more and more vicious. After one stupid mistake, things quickly fell apart. I'm surprised the characters lasted as long as they did.

This book seems to have a polarising effect among reviewers. Part of it is probably that it straddles the line between horror and thriller, stymying people who like to be able to slap a convenient label on things. The other part is probably the characters. I didn't find any of them overly likeable but I didn't hate any of them either. Sure, I wanted to slap them around from the moment they decided it was a good idea to go for a romp in the Mexican jungle all the way until the end but that's how horror stories of this type go sometimes.

Eric's self-mutilation was one of the creepier parts of the book, made creepier at the end when it turned out he actually had vines inside him. I felt bad for Jeff, trying to hold things together when everyone else seemed continually on the verge of losing his or her shit. I think I would have pushed some assholes down the mineshaft when he came back to find them all drunk.

The vine was creepy but that wasn't a surprise since plants are emotionless monsters. Just look at the Venus Flytrap or watch how quickly plants overtake an abandoned shed or cabin. I didn't have a problem with the plant's intelligence but I will admit that its mimicry was a little far fetched at the end.

While The Ruins isn't your grandma's horror novel, it delivers the goods if you're looking for a tale of desperation and creepiness. Four out of five stars.