The Publisher Says: Growing up, Jason and Marcus Grant were close as only brothers can be. As they reached adolescence, they started to drift apart, taking opposite paths into adulthood. Jason went to college before getting a job at for the local newspaper. Marcus chose a path littered with drugs, violence, and self-destruction.

Now adults, Jason has cut Marcus from his life and considers himself an only child.

Clean and sober, Marcus finds his true calling when he joins the Arkadium, a secret society dating back millennia. They plan on setting history back ten thousand years by unleashing a world-wide calamity that will destroy modern man's domination of the planet. As the Arkadium set their plan in motion, Marcus reaches out to his brother, wanting him by his side to record the new prehistoric era. Jason is forced to make a choice, join his brother in the time of humanity's descent, or die like so many others.

A 16,000-word novella that introduces the forthcoming Brother's Keeper trilogy of novels. Book 1 is due Winter 2012.

My Review: Jason and Marcus are dysfunctional brothers from a dysfunctional family. Mom's a cold fish, borderline sociopath; dad's a dishrag, cries easily, and clearly dissociates from his life with a cold woman whose affections he simply can't engage. Neither "parent" spares much time for their sons, and Jason, the elder and the family fixer/achiever, tries to make it all work...until the day Marcus basically kills himself with a heroin overdose the same time as Jason's full scholarship to Washington University is announced.

So Marcus sinks into a self-destructive spiral, Jason struggles with his emotional scars, and the story opens with Jason reconnecting with one of Marcus's few good efforts: His girlfriend Delaney, an ex-goth chick and cutie who convinces Jason to go with her in a search for a new, improved Marcus, who has found God.

Boy howdy, has he found God. God has told Marcus what to do, and he's setting out to do it: End the world, one dam at a time. Jason is unwillingly roped into Marcus's millennarian plans, with a secret and unorthodox role to play in the Brave New World that Marcus is calling into being. Whether he wants to play that role or not.

This novella is a very quick read, and it's far more assured and well-made than much of its competition. It's clearly only a small piece of a larger mythos, which the author's promotional materials suggest will be coming online soon.

The pace is brisk; the characters are quickly and efficiently limned; the plot is firmly and boldly erected.

This is a solid effort from a writer to watch. Get your Kindle edition and pass a pleasant hour in the company of Krisch's creation.

This work is licensed under a Creative Commons Attribution-NonCommercial-ShareAlike 3.0 Unported License.
Posted by Richard at 8:30 AM No comments:

A Soldier's Tale of Cowardice and Bravery 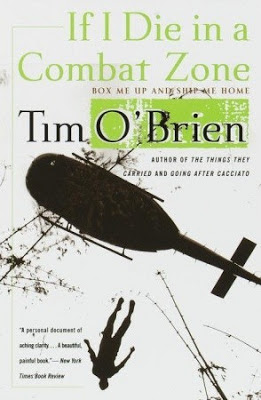 For me, Tim O'Brien's The Things They Carried is the most powerful book that I have every read and it's the standard against which I judge all things O'Brien. In The Things They Carried, O'Brien utilizes a nonlinear and fragmented narrative structure, magical realism, and the power of storytelling to capture the visceral truth that telling the real story can't quite capture. For O'Brien, we must sometimes turn to fiction to capture what is "emotionally true" and, in doing so, be less concerned with an objective reality. In a way, If I Die in a Combat Zone makes this point for him. Written 15 years before Things, If I Die is a memoir of Tim O'Brien's experience in the Vietnam War. There is no metafiction razzle-dazzle, but rather a straight-forward, linear narrative that begins when O'Brien is drafted and ends as he boards the Freedom Bird headed toward home. It's powerful stuff, but not nearly as powerful as his fiction work. Despite that, anything by Tim O'Brien is better than almost anything else out there--fiction or non-fiction.

Having grown up in the post-World War II glow of American military might, O'Brien was raised in the ask-no-questions patriotic culture of the Midwest. Real men were expected to fight. Real men were supposed to look forward to war. Real men craved the opportunity to serve their country and protect their families. O'Brien doesn't reject these values, but these views are complicated by his own philosophical inclinations. He questions the nature of bravery, as well as how American intervention in Vietnam is protecting the average American's right to life, liberty, and the pursuit of happiness. In the aftermath, he's left with no certain answers: "Now, war ended, all I am left with are simple, unprofound scraps of truth. Men die. Fear hurts and humiliates. It is hard to be brave. It is hard to know what bravery is. Dead human beings are heavy and awkward to carry . . . Is that the stuff for a morality lesson, even for a theme? . . . Can the foot soldier teach anything important about war, merely for having been there? I think not. He can tell war stories."

And that's what O'Brien does in the novel--he tells war stories. He tells of the tedious days of repetition, punctuated by brief bursts of action; he tells of military incompetence and the frustration of not knowing who the enemy is in a land where farmers by day picked up guns at night; he tells of how cruel being sent on R&R was, knowing the brief return to normality would not last. And he does all of this without being preachy; he simply shows us what life was like for the average soldier and leaves us to draw our own conclusions. His language is at once poetic and precise, getting to the heart of all things. No one can capture the peculiar mix of fear, adrenaline fed excitement, and remorse of a soldier's most introspective moments like O'Brien.

At one point, O'Brien ruminates on Ernest Hemingway's fascination with war: "Some say Ernest Hemingway was obsessed by the need to show bravery in battle. It started, they say, somewhere in World War I and ended when he passed his final test in Idaho. If the man was obsessed with the notion of courage, that was a fault. But, reading Hemingway's war journalism and his war stories, you get the sense that he was simply concerned about bravery, hence about cowardice, and that seems a virtue, a sublime and profound concern that few men have." It's a concern that permeates all of O'Brien's work and his treatment of it is indeed sublime.
Posted by Amanda at 8:00 AM No comments: