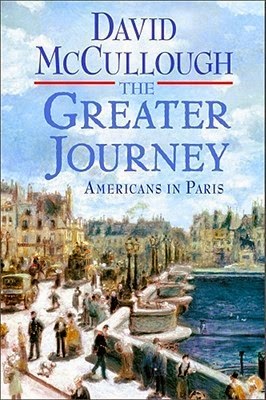 The Greater Journey by David McCullough
2011
Reviewed by Diane K.M.
My rating: 4 out of 5 stars

This book made me wish I could travel back in time to Paris in the 1830s. The collection of artists and writers there was remarkable.

In "The Greater Journey," David McCullough tells stories of a varied group of Americans who went to Paris in the 19th century, and then returned home with new ideas, new art, new writings and even new inventions. The group included James Fenimore Cooper, Oliver Wendell Holmes, Mark Twain, Henry James, Nathaniel Hawthorne, Ralph Waldo Emerson, Harriet Beecher Stowe, and Mary Cassatt, among others. One of my favorite chapters was about Samuel Morse, who studied to be a painter, but also ended up inventing the telegraph and Morse Code.

I also liked the story of Charles Sumner, who studied at the Sorbonne. When Sumner saw black students in the class with the same desire for knowledge as white students, it profoundly changed how he thought of African-Americans. After he returned home to the States, he became a powerful spokesman for abolition.

"It would be a while before Sumner's revelation -- that attitudes about race in America were taught, not part of 'the nature of things' -- would take effect in his career, but when it did, the consequences would be profound. Indeed, of all that Americans were to 'bring home' from their time in Paris in the form of newly acquired professional skills, new ideas, and new ways of seeing things, this insight was to be as important as any."

This is the third McCullough book I've read, the others being "Truman" and "1776," and I really like his writing style. He is a gifted storyteller and weaves in interesting details from history. I listened to this on audio (read by Edward Hermann), but I was glad I had a print copy to review because it includes some great photographs and pictures, especially of the artwork that was created in Paris.

There were so many fascinating people and great stories in this book, and I would highly recommend it to fans of history.

The Cry of the Owl

The Cry of the Owl by Patricia Highsmith
My rating: 3 of 5 stars

When a girl living in an isolated house spurns her fiancee for the peeping Tom that's been spying on her, things quickly circle the drain, lives destroyed in a maelstrom of hatred, jealousy, lies, and death...

I read The Talented Mr. Ripley in the fairly recent past and have been on the lookout for more of Patricia Highsmith and her twisted protagonists ever since. This one was only $1.99 on the kindle.

Robert Forrester is a soon-to-be divorced man working at an engineering firm in a small town when he chances upon Jenny alone in her home. Jenny soon gives her fiancee and decides she's in love with Robert. Robert decides he's not in love with her but not until after her ex-fiancee decides to ruin Robert's life with the help of Robert's crazy ass ex-wife Nickie. This is some twisted shit.

I have to think that Gillian Flynn is a big Patricia Highsmith fan since this thing has Gone Girl written all over it. I guess it's like what might have happened if Amy and Nick had gotten divorced but still remained a cancerous part of one anothers' lives.

I don't want to give away any more than I already have. Suffice to say, people lie, people cry, and people die.

I would have rated this much higher but Robert seems to be taking stupid pills throughout the book, every time his ex-wife appears, in fact. The ending is the worst offender.

However, the book is still a crazy read. There's not a person without a few screws loose among the main cast. Highsmith's writing is like a mannerly Jim Thompson. You get the feeling she knew first hand about the crazy shit she was writing about, much like old Jim.

3.5 out of five stars. It was a good read but not as good as Ripley.