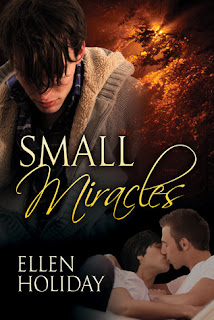 When runaway Cal Harrison steps into a bar to escape the freezing rain, he meets Matt Kirkland, who buys him a meal and eventually takes him home for the night. But Cal's been on hard times, and he doesn't believe something as good as Matt could possibly happen to him. Not without setting him up for disaster. So Cal leaves—only to discover Matt’s not just a rich kid but a well-known millionaire. Soon Cal begins to question whether he should have swallowed his pride and left his difficult life behind.

Even though this was a little too sweet and unrealistic for me, I couldn’t help being swept away by the plight of the main characters - Cal Harrison, who fled the home of an abusive stepfather and is now living on the streets, and Matt Kirkland, despite having everything he needs and more money than he knows what to do with, feels a void in his life.

The heart-wrenching first scene when Cal walks into a bar, dirty, dripping rain onto the floor and shivering, effectively conveys his desperation, his discomfort, and the harsh realities of homelessness. He doesn’t have the money to pay the $5.00 cover charge. Matt not only pays the cover, but buys him drink and food as well.

Matt wears down Cal’s resistance and takes him home. Their sex is warm, intense and magical. But once it’s over, their separate worlds come into conflict. Cal takes his damp clothes and flees Matt’s apartment.

For the first time in quite a while, Cal feels comfortable, safe and secure. Can he trust Matt not to disappoint him like others in his life have?

I liked the way this story explored situations that can lead to homelessness and the difficulties and indignities one must endure. Cal’s life is tough and Matt proves he’s not an unfeeling millionaire.

It’s all too good to be true, but surely there’s no harm in occasionally indulging in the fantasy that people are basically good and have your best interests at heart.
Posted by Nancy at 9:33 PM No comments: