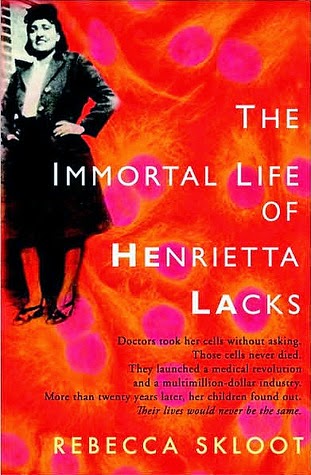 The Immortal Life of Henrietta Lacks by Rebecca Skloot
2010
Reviewed by Diane K.M.
My rating: 4 out of 5 stars

I am late to this book party, but let me explain.

I get twitchy about medical stuff. Earlier this year I had to abandon Rosemary Mahoney's book about the blind because it described an eye surgery. I have never been able to finish Dr. Atul Gawande's "Complications" because of its description of medical procedures. It was a small miracle that I was able to finish the first "Call the Midwife" book, because I hate childbirth scenes.

When this Henrietta Lacks book started tearing up the bestseller lists a few years ago, I read a few reviews and thought, "Yeah, that can wait."

But I started a new library job recently, and the Lacks book was chosen as a Common Read for the campus. And guess who was volun-told to help lead upcoming book discussions? (Hint: it's me.)

So, with a deep sigh, I started reading. And then, oh happy day, my fears turned out to be unfounded because I ended up really liking the story. Rebecca Skloot wrote that she first heard about Henrietta Lacks and her immortal cells in a community college biology class. Lacks was a black woman who died in 1951 from cervical cancer. Before she died, a surgeon at Johns Hopkins Hospital took samples of her tumor and put them in a petri dish. A key part of this story is that Henrietta did not know her tissue had been taken, and doctors did not tell her family, either.

"Scientists had been trying to keep human cells alive in culture for decades, but they all eventually died. Henrietta's were different: they reproduced an entire generation every twenty-four hours, and they never stopped. They became the first immortal cells ever grown in a laboratory."

Henrietta's cells, nicknamed HeLa, were given to scientists and researchers around the world, and they helped develop drugs for treating herpes, leukemia, influenza, hemophilia, Parkinson's disease, and they helped with innumerable other medical studies over the decades. At first, the cells were given for free, but some companies were set up to sell vials of HeLa, which became a lucrative enterprise.

"The reason Henrietta's cells were so precious was because they allowed scientists to perform experiments that would have been impossible with a living human. They cut HeLa cells apart and exposed them to endless toxins, radiation, and infections. They bombarded them with drugs, hoping to find one that would kill malignant cells without destroying normal ones. They studied immune suppression and cancer growth by injecting HeLa cells into immune-compromise rats, which developed malignant tumors much like Henrietta's. If the cells died in the process, it didn't matter -- scientists could just go back to their eternally growing HeLa stock and start over again."

Unfortunately, the Lacks family did not know about any of this until several decades after Henrietta had died, and some relatives became very upset and felt betrayed by the doctors at Hopkins. A few threatened to sue the hospital, but never did.

There is a lot of biology and medical discussion in this book, but Skloot also tried to learn more about Henrietta's life, and she was able to interview Lacks' relatives and children. Additionally, there is some good discussion on the ethics of taking tissue samples from patients without their consent, and on the problem of racism in health care.

"I always have thought it was strange, if our mother cells done so much for medicine, how come her family can't afford to see no doctors? Don't make no sense. People got rich off my mother without us even known about them takin her cells now we don't get a dime. I used to get so mad about that to where it made me sick and I had to take pills. But I don't got it in me no more to fight. I just want to know who my mother was." -- Deborath Lacks, who was very young when her mother died

My favorite parts of the book were the stories about Henrietta and the Lacks family, and the discussions on race and ethics in health care.

"There's no indication that Henrietta questioned [her doctor]; like most patients in the 1950s, she deferred to anything her doctors said. This was a time when 'benevolent deception' was a common practice -- doctors often withheld even the most fundamental information from their patients, sometimes not giving them any diagnosis at all. They believed it was best not to confuse or upset patients with frightening terms they might not understand, like cancer. Doctors knew best, and most patients didn't question that. Especially black patients in public wards. This was 1951 in Baltimore, segregation was law, and it was understood that black people didn't question white people's professional judgment. Many black patients were just glad to be getting treatment, since discrimination in hospitals was widespread."

Skloot worked on the book for more than a decade, paying for research trips with student loans and credit card debt. I would highly recommend the book to anyone interested in medical ethics, biology, or just some good investigative reporting.

Favorite quote:
"Like I'm always telling my brothers, if you gonna go into history, you can't do it with a hate attitude. You got to remember, times was different." -- Deborah Lacks
Posted by DianeLibrarian at 6:00 AM No comments:

King Khan by Harry Connolly
My rating: 2 of 5 stars

When a mysterious arrow bearing a message in his handwriting instructs Professor Khan to go to Hollywood, he finds that a friend of his has committed suicide and his newest invention is missing...

King Khan is the fourth book in the Spirit of the Century series by Evil Hat. It's also my least favorite book in the series. I'll cover that bit later.

Professor Khan, with rich fop Bertie Blinkersly in tow, leaves London behind for Hollywood to solve the mysteries surrounding a friend's death and winds up in a battle for his last invention, the Improbability Bow. Helping him and Bertie Wooster, I mean Bertie Blinkersly, are the inventor's daughter Sylvia, a diminutive cop named Cross, and a luchador named the Blue Hornet. Sound good?

Meh. It was okay and had some good moments but it was nothing spectacular. It may have been that the previous books in the series were just too much fun and raised the bar too high. After the two Dinocalypse books and Khan of Mars, the Hollywood setting and the threat just didn't do it for me. Hell, you'd have to do a lot to top psychic dinosaurs and Martian apes.

Don't get me wrong. King Khan isn't a bad book. There are a lot of twists and lots of pulp action. There are also hopping zombies and a fair amount of humor, much of it due to the Bertie Wooster-inspired Bertie Blinkersly. It just had some might big shoes to fill after it's predecessors.

The Blue Hornet greatly added to my enjoyment of the book. It reminded me of the crappy movies they used to make starring El Santo, Mil Mascaras, Blue Demon, and other luchadors fighting werewolves and things.

The Blue Hornet and the possessed Shirley Temple were enough to add a half star. 2.5 out of 5 stars.

The Widening Gyre by Robert B. Parker
My rating: 3 of 5 stars

When a state representative is getting blackmailed with a film of his wife having sex with another man, he hires Spenser to get to the bottom of things for him. But when Spenser learns the man's identity, he's bitten off more than he can chew, especially with him preoccupied with Susan Silverman being out of town.

I was needing a quick read before taking on another fantasy read and The Widening Gyre fit the bill. It got the job done.

The book started slow, with Spenser moping because Susan Silverman was out of town. Even when Susan's not around, she manages to suck the life out of things. Anyway, Spenser gets on a security detail for a state representative with an alcoholic wife and things spin out from there.

Spenser did some great detective work when he wasn't pining for Susan in this one, gradually piecing together the identity of the blackmailer and then stirring up a hornet's nest when he finds out who the man's father is. There isn't a whole lot of action in this one but when it comes, Parker makes it count.

So yeah, I only gave this a three despite enjoying the shit out of parts of it. Firstly, there was very little Hawk. Secondly, there was way too much of Spenser and Susan discussing their relationship when they finally crossed paths again halfway through the book. Are there people out there who actually enjoy Susan Silverman having such a large role in the books?

Despite the abundance of Susan and lack of Hawk, I still enjoyed this book for the most part. 3.5 out of 5.