THE MARTIAN BY ANDY WEIR

The Martian by Andy Weir
My rating: 4 of 5 stars

”So that is the situation. I’m stranded on Mars. I have no way to communicate with Hermes or Earth. Everyone thinks I’m dead. I’m in a Hab designed to last thirty-one days.

If the oxygenator breaks down, I’ll suffocate. If the water reclaimer breaks down, I’ll die of thirst. If the Hab breaches, I’ll just kind of explode. If none of those things happen, I’ll eventually run out of food and starve to death.

When I read the line “kind of explode” I couldn’t help thinking of Arnold Schwarzenegger in the movie Total Recall, face contorted, eyes bulging as the oxygen deprived atmosphere of Mars was about to detonate his head.

I’ll wait for the next mission to a blue planet thank you very much.

Mark Watney, Mars astronaut, has a lot to worry about. It is hard to say if he has more to worry about than Douglas Quaid/Hauser (Arnold’s character in the movie). At least he doesn’t have people trying to kill him on Mars. In fact, when his fellow astronauts left he effectively became:

”Mars keeps trying to kill me.”

He amends that thought with:

”Mars and my stupidity keep trying to kill me.”

Watney is far from stupid. He scavenges like a futuristic version of Robinson Crusoe from the left over debris of the Hermes crew’s hasty departure. The incident that “ended” Watney’s life had them in a panic.

”Reports of my demise have been greatly exaggerated.”

He finds a whole memory stick of seventies sitcoms to keep him occupied and more importantly stuff to keep him alive.

Watney becomes the first farmer on Mars. He knows he doesn’t have enough food to last until the next mission to Mars is scheduled so he has to improvise. Luckily the crew was to be there over the Thanksgiving holiday and for morale purposes NASA sent along potatoes with those all important eyes intact.

”My morning piss goes in a resealable plastic box. when I open it, the rover reeks like a truck-stop men’s room. I could take it outside and let it boil off. But I worked hard to make that water and the last thing I’m going to do is waste it. I’ll feed it to the water reclaimer….

Even more precious is my manure. It’s critical to the potato farm, and I’m the only source on Mars. Fortunately, when you spend a lot of time in space, you learn how to shit in a bag. And if you think things are bad after opening the piss box, imagine the smell after I drop anchor.”

When he finds a way to communicate with Earth in one of his more spectacular MacGuyver moments they tell him that he is going to have to drive to another site where there is a rocket ship, already delivered, waiting for the next mission. He will drive on terrain that looks like this:

The ship is in Giovanni Schiaparelli’s crater. Watney being Watney has a few juvenile observations about his arrival at the crater.

No, that doesn’t sound good either….

The science is unbelievable and since Andy Weir was a fifteen year old prodigy and is obviously still extremely bright in middle age I have to believe him that he has this all figured out. Watney injects humor as he explains his innovative scientific brilliance which at times had my eyes glazed over trying to keep up. So even as you are getting overwhelmed by the science Weir will elicit an eye roll from the more sophisticated reader. He might even inspire an outright chortle if you are of the low brow variety of humor lovers. I must be more of the pan-humor variety as he elicited a wide range of sniggers, snorts, and raised eyebrows from me.

”I tested the brackets by hitting them with rocks. This kind of sophistication is what we interplanetary scientists are known for.”

The one thing that might save your life on Mars, Earth or any other planet you might want to visit is something that NASA didn’t invent.

“Also, I have duct tape. Ordinary duct tape, like you buy at a hardware store. Turns out even NASA can’t improve on duct tape.”

Watney worships duct tape and given the hairbrained ideas he puts into practice he needs miles and miles of it.

It turns out duct tape has a variety of uses for providing additional support. We are such an ingenious species.

Weir convinced me that Watney could live on Mars for over a year while awaiting rescue. With mangled equipment, a harsh unforgiving terrain, and the ever present, one more thing going wrong, depression that Watney has to overcome everyday, this reader started feeling the pain of failure and the elation of success right along with him. As the world learns he is alive humanity began rooting not for the American to live, but for the human species to triumph.

In the 1970s when I was old enough to watch what NASA was doing and marvelled at our ability to do the impossible. It was a time when absolutely anything seemed achievable. We’d had leadership that insisted that we needed to go to the moon. We still built things, now it feels like the monuments of our times are being built other places. I do think we all miss having a common goal. Something that we all feel we are a part of, something larger than ourselves. With a space program gutted and the idea of a manned mission to Mars staggeringly expensive it makes me realize how lucky I was to grow up in a time when it really felt like the impossible was possible. I’m probably the last of the optimists who still believes that we have to go see it; we have to put our footprint on it; we have to scatter our debris around and say ‘yes we were here’. We need a Mark Watney to be lost on Mars so we have something to cheer for that brings us together as a species.

Posted by JEFFREYKEETEN at 9:16 AM No comments:

A Peek into the World's Strange Past 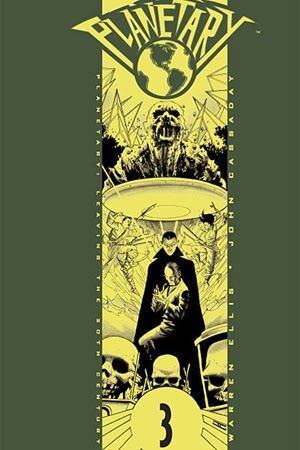 In this third volume of Planetary stories we not only get to step back for a moment and have a bit of a look at the adventures of Elijah Snow in his century of existence trying to keep the world strange, but we also get more details on the Four and their intersection with the Planetary organization prior to the current story arc. Ellis is able to play in a lot of cool sandboxes as a result and the genre mashing continues much to my personal glee!

Issue 13 – “Century”: Just how did Elijah Snow form the Planetary organization and why did he do it? Well, not all of the answers will be provided here, but we get an intriguing glimpse at young Elijah Snow circa 1919 as he tracks down the members of a secret organization from the 19th century whose goal was to “better mankind” from behind the scenes. Elijah doesn’t like that kind of meddling, but he just might have something to learn from one member of the cabal at least. Really cool stuff involving Frankenstein’s Monster(s), Dracula, Sherlock Holmes, and some shout-outs to other luminaries from the penny dreadfuls and pulp fiction of an earlier day. Cool stuff.

Issue 14 – “Zero Point”: A flashback story showing just why (and how) the Four were able to mind-wipe Elijah. We get to see just how dangerous an opponent Snow and his group can be as they handily take down two members of the Four before being overcome by the ridiculously superior firepower the Four can bring to bear. There is also a chilling opening sequence that pulls some cool references from both Marvel’s Thor comic book and Alan Moore’s more esoteric work in Miracleman that serves to once again highlight the utter evil bastard status of the Four and help explain Elijah’s driving desire to stop them at any cost.

Issue 15 – “Creation Songs”: Back in the present we join Elijah, Jakita, and Drummer as they attempt to intercept the Four who are analysing Ayers Rock for their own arcane purposes. This in turn leads to a flashback story where Snow explains the significance of the place and just how it ties in to the wider cosmology that Ellis has created for his multiverse.

Issue 16 – “Hark”: The mysterious figure of Anna Hark, with links to both Axel Brass’ former team of superhumans and the Four, is brought from out of the shadows to play a central role in this issue. Snow is working hard at consolidating his power and ensuring that his upcoming standoff with the Four is his final one. No mistakes this time. To that end he will need all the allies he can get. Will the enigmatic and unpredictable Anna Hark play ball? This issue also has a cool intro that brings the popular wuxia films like “Crouching Tiger, Hidden Dragon” to mind. It’s great to see how Snow is the kind of character who thinks out his moves and is playing the long game, he’s not just going to barge in and try to bash the villain’s head in (though of course if that’ll work he’s not averse to incorporating it into his plan).

Issue 17 – “Opak-Re”: Another flashback to Snow’s earlier journeys and discoveries when Planetary was still a relatively new organization and the fieldwork was primarily done by Elijah himself. Great homage to Edgar Rice Burroughs, Philip Jose Farmer, and the Indiana Jones films. We also get a tantalizing glimpse of Ellis’ Tarzan analogue Lord Blackstone and some significant revelations about Jakita and her very long relationship with Snow. Lots of fun.

Issue 18 – “The Gun Club”: Ellis takes nineteenth century space travel, Jules Verne, and a new plan by Snow to draw out members of the Four and deal with them individually and does his usual trick: incorporate cool ideas from across pop culture boundaries and not only use them to build a strange and wonderful world, but tie them in to an intriguing story of the battle of superhumans for control of the kind of world we live in.

What can I say? Still great stuff. Even when there are weaker issues they’re fun and everything contributes to the wider story arc and the further fleshing out of Ellis’ cool world. Also, Cassaday’s art remains consistently beautiful…this is really some of the best art I’ve seen in the comic book medium and it just makes Ellis’ ideas pop off the page that much more. If you want to see something new being done in comics (even though it ironically makes heavy use of what’s old) then go read it!