The Last Place You Look 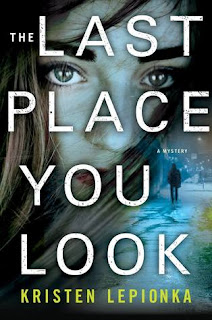 
Sarah Cook, a beautiful blonde teenager disappeared fifteen years ago, the same night her parents were brutally murdered in their suburban Ohio home. Her boyfriend Brad Stockton - black and from the wrong side of the tracks - was convicted of the murders and sits on death row, though he always maintained his innocence. With his execution only weeks away, his devoted sister, insisting she has spotted Sarah at a local gas station, hires PI Roxane Weary to look again at the case.

Reeling from the recent death of her cop father, Roxane finds herself drawn to the story of Sarah's vanishing act, especially when she thinks she's linked Sarah's disappearance to one of her father's unsolved murder cases involving another teen girl. Despite her self-destructive tendencies, Roxane starts to hope that maybe she can save Brad's life and her own.

With echoes of Sue Grafton, Dennis Lehane and the hit podcast Serial, The Last Place You Look is the gripping debut of both a bold new voice and character.

Thanks to karen for bringing this to my attention and making it possible for me to get a copy from NetGalley. Because I forgot my password and took too long to get a new one, I decided to grab it from the library instead. Amazingly, I was the first to get my hands on a brand-new copy. Curses to Trump and others who want to defund our public libraries!

Despite the high ratings for this story, I expected a conventional crime novel with a badass PI who could do no wrong. Roxane Weary is nowhere near that perfect. Though she’s smart and competent at her job, she drinks way too much and has difficulty with relationships. She’s also grieving the death of her cop father, a man Roxane had a stormy relationship with despite their likeness in character.

Roxane takes on a difficult case involving a missing teenager and her black boyfriend, Brad Stockton, whose time on death row is fast running out. What seems like a cut and dried case turns out to be far more complex and connected to an earlier case her father was involved in.

This story explores racism, small-town secrecy, and family relationships that are not so harmonious. It was easy to pick up and difficult to put down. I was ready to be disappointed at figuring out the villain so soon and instead encountered more twists and surprises. The tension and excitement became so overwhelming at times that I forgot to breathe!

I liked that Roxane was in a relationship with Tom, her deceased father’s former partner, and Catherine, a woman who drifts in and out of her life. Her bisexuality was very positively and realistically portrayed. It was organic, treated as one of many aspects of her life and not just added in for titillation. Roxane is not promiscuous, indecisive, or just going through a phase. Kudos to Kristen Lepionka for helping to dispel ugly myths about bisexuality and creating such a fascinating character.

Can’t wait to see where Roxane’s life will take her next.
Posted by Nancy at 11:41 AM No comments: