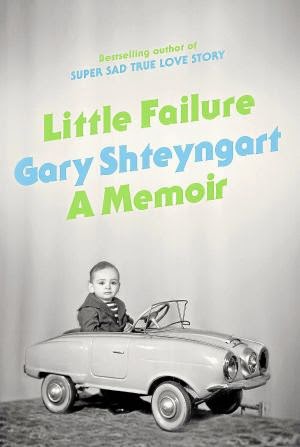 Little Failure by Gary Shteyngart
2014
Reviewed by Diane K.M.
My rating: 5 out of 5 stars

I loved this book so much that I finished it more than a week ago and I am still mulling it over. How can I write a review of a memoir so funny and brilliant and insightful and emotional and just plain good? My review will never be able to explain everything I admired in Shteyngart's writing. I used more than 50 Post-it flags to mark great passages. How can I share all of that?

I loved this book so much that I have already begged several friends to read it. I pleaded and cajoled them. I emailed them quotes. I shared anecdotes. I even requested a library copy for one friend, and am sharing my personal copy with another.

I loved this book so much that I have described it as the first legitimate 5-star book I've read this year. Sure, I've reread a few favorites that I gave five stars, and another one I marked up for personal reasons, but "Little Failure" is genuine. The Real Deal. The kind of book that I consider to be truly great, and one that will still be considered great years from now.

I loved this book so much that I developed kind of a crush on the author. Poor, sweet little Gary. Gary, whose original name was Igor, was born in Russia and immigrated to America in 1979, the year he turned 7. Igor changed his name to Gary to cut down on beatings from other kids. Poor Gary had tough parents: his dad called him "snotty" because of his asthma and his mother nicknamed him "little failure." Give that boy a hug already!

I loved this book so much that I want to read all of Shteyngart's previous novels. Throughout the memoir, he mentions characters and plots in his stories that were based on his real-life experiences, and I'm excited to see the fictional versions. I also like it when good writers talk about their writing process, and I got to see little Gary grow from being a boy who wrote science fiction stories while his grandmother fed him a piece of cheese for every page he wrote, to a young man whose first novel, "The Russian Debutante's Handbook," so upset a middle-aged relative that he threw it on the floor and spit on it.

I loved this book so much that it me laugh, it made me teary-eyed, and it made me marvel at the beauty of his storytelling. Now I'm going to stop trying to convince you that it's great and just start sharing favorite quotes. In conclusion, GO READ THIS BOOK ALREADY.

"Coming to America after a childhood spent in the Soviet Union is equivalent to stumbling off a monochromatic cliff and landing in a pool of pure Technicolor."

"The first momentous thing that happens to me in Kew Gardens, Queens, is that I fall in love with cereal boxes. We are too poor to afford toys at this point, but we do have to eat. Cereal is food, sort of. It tastes grainy, easy and light, with a hint of false fruitiness. It tastes the way America feels."

"In 1982, I decide that I can no longer be me. The name 'Gary' is a fig leaf, and what I really am is a fucking Red Gerbil, a Commie ... One day after one Commie comment too many, I tell my fellow pupils that I wasn't born in Russia at all. Yes, I just remembered it! It had all been a big misunderstanding! I was actually born in Berlin ... So here I am, trying to convince Jewish children in aHebrew school that I am actually a German. And can't these little bastards see that I love America more than anyone loves America? I am a ten-year-old Republican. I believe that taxes should only be levied on the poor, and the rest of Americans should be left alone. But how do I bridge that gap between being a Russian and being loved? I start to write."

"I write because there is nothing as joyful as writing, even when the writing is twisted and full of hate, the self-hate that makes writing not only possible but necessary. I hate myself, I hate the people around me, but what I crave is the fulfillment of some ideal."

"When I turn fourteen, I lose my Russian accent. I can, in theory, walk up to a girl and the words 'Oh, hi there" would not sound like Okht Hyzer, possibly the name of a Turkish politician. There are three things I want to do in my new incarnation: go to Florida, where I understand that our nation's best and brightest had built themselves a sandy, vice-filled paradise; have a girl tell me that she likes me in some way; and eat all my meals at McDonald's."

"The terrible thing about the major belief systems (Leninism, Christianity) is that too often they are constructed along the premise that a difficult past can be traded in for a better future, that all adversity leads to triumph, either through the installation of telegraph poles (Leninism) or at Jesus' knee after physical death (Christianity). But the past is not simply redeemable for a better future. Every moment I have ever experienced as a child is as important as every moment I am experiencing now, or will experience ever. I guess what I'm saying is that not everybody should have children."

"I think of my mother and father. Of their constant anxiety. But their anxiety means they still want to live. A year shy of forty, I feel my life entering its second half. I feel my life folding up. I sense the start of that great long leave-taking. I think of myself on the subway platform at Union Square. I am invisible, just a short obstacle others have to get around. Sometimes I wonder: Am I already gone? And then I think of my wife and I feel the whoosh of the number 6 train, the presence of others, the life still within me."

Posted by DianeLibrarian at 6:30 AM No comments:

Spiderstalk by D. Nathan Hilliard
My rating: 3 of 5 stars

When his brother's family vanishes, leaving behind only a frantic phone message and a blurry photo of an immense spider, Adam Sellar hires a private detective to find them. He soon finds himself ensnared in a centuries old web of hate between two secret factions...

The cover and prologue made me think this was going to be a book about dog-sized spiders running people down and devouring them. It didn't turn out to be that kind of book at all but I still enjoyed it.

Spiderstalk is the story of two warring native American tribes, The Dog People and The Spider People, who both derive their power from neurotoxin in a particular species of spider's venom. The Dog People merely use the venom but the Spider People live in symbiosis with the giant spiders. Adam Sellars gets caught in the middle when his family takes a wrong turn and falls victim to one of the spiders.

The book this most reminded me of was The Furies, which I read earlier in 2014, although I liked this approach to the "secret beings fighting a secret war among us" much better.

The worldbuilding was top notch, as were the various factions within the Dog People and the Spider People. For a book that I originally thought was going to be a bunch of people killed by giant spiders, things were very intricately plotted regarding the spiders and the history surrounding them. Carbon nanotubes, bitch! Actually, the reason I thought prevented spiders from becoming super huge monsters, namely their book lungs, wasn't mentioned but I really liked that they had webbing and exoskeletons made of naturally occuring carbon nanotubes.

Spiderstalk was an entertaining thriller not without a lot of creepy bits. And free on the Kindle as well. If you're into spiders, you'll enjoy it quite a bit. 3.5 out of 5 stars.

Dead Skip by Joe Gores
My rating: 4 of 5 stars

When repo man Bart Heslip is found in a coma in a wrecked, repossessed Jaguar, his college, former cop Larry Ballard, can't shake the idea that someone staged the accident to cover something up. Armed with only his wits and Heslip's last two days worth of cases, Ballard goes up against a three day deadline to find a would-be killer.

I initially bought this because I knew it was a crossver with Richard Stark's The Plunder Squad. It proved to be a pretty read all on its own.

Dead Skip reads like an episode of The Wire if The Wire was about a bunch of private detectives working for Dan Kearny and Associates, a repo agency. Ballard runs all over San Fransciso and surrounding areas, running down any lead he can find, looking for the man who put Bart Heslip in a coma. Needless to say, it boils down to legwork and talking to people, not booze and broads.

The case was serpentine in its complexity and not easily solveable. The dead leads outnumbered the useful ones by 12 to 1. By the time Ballard finally got on the trail, I was as worn out as he was.

Kearny and Ballard were both fairly well drawn characters for a book of this type from the era when it was written. Kearny doggedly looking for his man reminded me of Matthew Scudder a bit. Kearny could have easily been a world-weary police chief in another life.

The crossover with Parker made me want to reread all the Richard Stark novels. Speaking of Stark, the writing reminded me of Ed McBain collaborating with Richard Stark, despite both of them being pseudonyms and not actual people.

Dead Skip was a fun read and not just because of the Parker crossover. I'll be looking for the subsequent DKA books. Four out of five stars.