A Different Kind of History 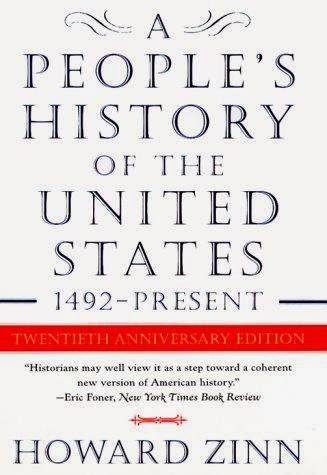 A People's History of the United States by Howard Zinn
first published in 1980; updated in 2005
Reviewed by Diane K. M.
My rating: 5 stars


I loved this so much that I'm going to resort to hyperbole: If you read only one book about American history, let it be this one.

This is not a typical history book. Instead of telling the stories of the victors, Howard Zinn focused on those who have been oppressed in the United States. The minorities. The protesters. The downtrodden.

In the preface to the updated edition about the Twentieth Century, Zinn wrote: "It is obvious in the very first pages of the larger People's History, when I tell about Columbus and emphasize not his navigational skill and fortitude in making his way to the Western Hemisphere, but his cruel treatment of the Indians he found here, torturing them, exterminating them in his greed for gold, his desperation to bring riches to his patrons back in Spain. In other words, my focus is not on the achievements of the heroes of traditional history, but on all those people who were the victims of those achievements, who suffered silently or fought back magnificently."

I listened to this on audio CD (read by the talented Matt Damon), and the edition focused on the events of the Twentieth Century, including the Vietnam War, the women's movement, the Civil Rights Era, the Clinton presidency and the infamous Bush v. Gore election of 2000. My favorite sections were about the 60s: civil rights, war protests, and the rise of feminism. The complete edition of People's History is more than 700 pages and starts back in 1492 (when "Columbus sailed the ocean blue...").

I first read Zinn's book back in the 90s, but I didn't fully appreciate it. Having more life experience and seeing how much power the rich and powerful really have, I got so much more out of this book this time. I've even referenced it in the sociology class I teach, because so many elements are still relevant.

In his afterword, Zinn wrote: "I wanted, in writing this book, to awaken a greater consciousness of class conflict, racial injustice, sexual inequality, and national arrogance." Sir, you have succeeded.
Posted by DianeLibrarian at 6:00 AM No comments:

Raising Steam by Terry Pratchett
My rating: 4 of 5 stars

A young man invents the steam engine and the train and railroad soon follow. Lord Vetinari feels the winds of change blowing and puts Moist von Lipwig in charge of the burgeoning railway industry. But not everyone likes the idea of progress...

Here we are, the 40th Discworld book. Even after 40 books, I forget how clever Terry Pratchett is the time between volumes. I wasn't sold on this at first. The grag subplot felt disjointed and it seemed like old Pratch might have been going off the rails. Then the rhythm caught and soon it was full steam ahead.

Moist and Vetinari were in fine form. I was also pleased to see Vimes, Harry King, Lao-Tze, Mustrum Ridcully, and other old favorites make appearances. The fascination with the Iron Girder and the rest of the trains was completely understandable since I'm part of the large segment of the male population that is oddly fascinated with trains.

The goblins acclimating to life in Ankh-Morpork was another nice touch. The usual Discworld social commentary is present, as is the usual making me grin like a jackass. I even enjoyed the dwarfish subplot as I drew near the end, although it still seemed a little off.

It's not the best Discworld book out there but even on his worst day, Terry Pratchett always manages to keep me entertained. Four out of five stars.

Hexed by Kevin Hearne
My rating: 4 of 5 stars

When Tempe's witch population booms, Atticus O'Sullivan is forced to make peace with the members of the former coven and join forces with them to drive the newcomers out of town. But what other deals will he have to make to see his task through to the end?

Hexed is the second volume in the Iron Druid Chronicles and nearly as good as the first. Witches following Bacchus roll into town from Vegas and start shaking things up. Throw in Coyote, Atticus' new apprentice, and some mop from the previous book and Hexed is pretty hard to put down. Once again, Atticus gets bits burned and lopped off, but manages to survive. He also manages to set up the next book.

The magic system in the Iron Druid Chronicles works better for me as a reader than that of the Dresden Files. That might be that Atticus doesn't explain the same things in every book, though. His modern slang continues to get on my nerves, however. I understand that he needs to fit in but his personality doesn't really fit my concept of a 2000 year old being either. He seems more like a typical 30 year old and doesn't display much more wisdom than that. I did appreciate the depth of his pop culture references, although he could stray further from the Butcher repertoire.

Curmudgeonations aside, I still had quite a bit of fun reading this. The widow McDonaugh and Oberon continue to be my favorites among the supporting cast. The witches were further developed and I expect they'll continue being a prominent part of the series. The Morrigan and Brighid seem to have a power struggle brewing.

Hexed shows that Hearne's pulling Atticus from the Harry Dresden mold but the imprints are still pretty clear. Four out of five stars.