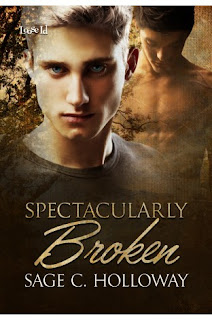 Before he knows what's happening, his designer duds have been switched for tie-dye shirts in therapy team colors, and he is surrounded by an assortment of misfits: a timid nerd, a mute girl, a hyperactive kid... and captivating loner Cai Fields, who is admittedly pretty hot, but seems to hate the world in general and Lysander in particular.

Soon Lysander struggles with lies, withdrawal, and several uncomfortable revelations that he never intended to make, but he also gains surprising amounts of support right in the middle of secret late-night parties, fisticuffs over doing the dishes, and, of all things, croissant blackmail. Even as Cai and Lysander finally give in to the irresistible attraction between them and make a grasp for happiness, their darkest secrets remain – secrets with the power to destroy everything they've fought so hard to have.

I have such mixed feelings about this book.

On the plus side, it is well written, engaging, warm, funny, and sad.

19-year-old Lysander parties hard, has too much sex, and has no clue what he wants out of life. His father is a famous actor and absentee parent who provides everything but the support and structure kids need while they are growing up.

Beyond frustrated, Lysander’s father sends him away for a few weeks to Oak Hill Manor, a retreat for troubled children. He is accompanied by his cousin, Finn, who shares a resemblance, but lives a totally different life.

At the retreat, Finn and Lysander are in separate groups with other troubled teens. While participating in group therapy sessions, games and activities, they get to know each other and form friendships. Lysander keeps a low profile, not wanting to reveal his background to others. How he accomplishes this is a spoiler, so I won’t say anything more. I will just say it is fun, clever and entertaining.

Though it wasn’t difficult for me to warm up to Lysander and his newfound friends, I was disturbed that kids were grouped together seemingly without any regard for the problems that brought them to Oak Hill Manor. I felt the therapists and staff were lacking in knowledge, sensitivity, and had little regard for confidentiality. The problems faced by the retreat attendees were portrayed in such a shallow and simplistic way that I very nearly set the book aside. I’ve read other books that dealt much more sensitively and realistically with serious trauma and mental health problems. This wasn’t it.

If you can overlook this, enjoy the story for Lysander’s thoughtful narration, his growth, the love and friendships that anchor him, and the touching revelations between father and son that had me tearing up. I would have preferred an open ending rather than the conveniently happy-sappy ending that diminishes this story’s worth.