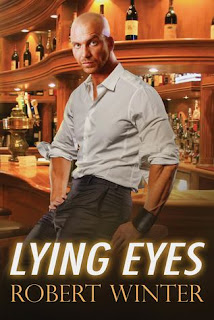 This bartender’s art lies in more than mixing drinks …

Randy Vaughan is a six-foot-three mass of mysteries to his customers and his friends. Why does a former Secret Service agent now own Mata Hari, a successful piano bar? Where did a muscle daddy get his passion for collecting fine art? If he’s as much a loner as his friends believe, why does he crave weekly sessions at an exclusive leather club?

Randy’s carefully private life unravels when Jack Fraser, a handsome art historian from England, walks into his bar, anxious to get his hands on a painting Randy owns. The desperation Randy glimpses in whiskey-colored eyes draws him in, as does the desire to submit that he senses beneath Jack’s elegant, driven exterior.

While wrestling with his attraction to Jack, Randy has to deal with a homeless teenager, a break-in at Mata Hari, and Jack’s relentless pursuit of the painting called Sunrise. It becomes clear someone’s lying to Randy. Unless he can figure out who and why, he may miss his chance at the love he’s dreamed about in the hidden places of his heart.

Note: Lying Eyes is a standalone gay romance novel with consensual bondage and a strong happy ending. It contains potential spoilers for Robert Winter’s prior novel, Every Breath You Take.

After meeting Randy Vaughan, sexy older bartender in Every Breath You Take, I was thrilled to get the opportunity to read his story and find out why he is not in a relationship and why he retired early from the Secret Service.

Those mysteries and a few others gradually get solved as Randy learns more about Jack Fraser, an English art historian who is extremely interested in a post-impressionist painting Randy purchased while he was in London. Meanwhile, a homeless teenager is assaulted outside Randy’s bar and Randy, all big muscles and soft heart, dispatches his assailants and brings the kid home. Danny has secrets, but doesn’t hide the fact that he finds Randy hot. Though this is an awkward situation for Randy, he remains firm and never allows their relationship to move beyond friendship. While Danny is living with him, Randy also hides his weekly visits to an exclusive leather bar. To his surprise, he discovers the sexually submissive Jack shares similar interests.

I loved Jack’s passion towards his job and found the story rich with interesting details and history of post-impressionist art and was fascinated by how much work and research goes into determining the authenticity of a painting. While Jean-Pierre Brousseau was a fictional artist, he sure felt real to me. I also loved the glimpses into Randy’s warm and caring personality. Despite his skittishness about relationships and his gruff exterior, Randy cares deeply about his friends, treats his employees well, and is devoted to Danny’s care.

This was a perfect mix of romance, mystery, and suspense that was a lot of fun to read. Weighty issues, like overcoming the pain of betrayal, and learning to trust and forgive are explored, lending depth and complexity.

I thoroughly enjoyed this story and hope Danny will make another appearance.
Posted by Nancy at 1:53 PM No comments: