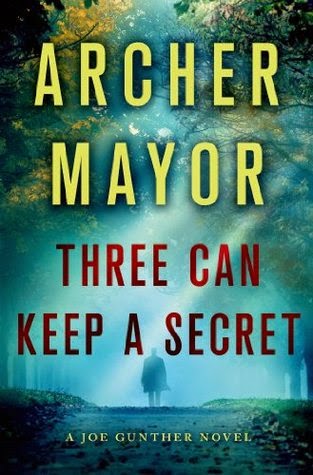 
The twenty-fourth entry in Archer Mayor's series featuring Joe Gunther of the Vermont Bureau of Investigation is among the best books in the series.

When Hurricane Irene blows through Vermont, it does millions of dollars worth of damage and causes enormous headaches for virtually all of the series' familiar cast of characters. Gunther's former love interest, Gail Zigman, is now the state's governor and has to deal with the mess and the political fallout that results. Gunther and his team must deal with a number of more specific issues.

As an example, the Vermont State Hospital is flooded and an elderly mental patient who has been confined there for years manages to escape. The woman, Carolyn Barber, is known as "The Governor" because forty years earlier, she was indeed the state's governor for a day as the result of a PR stunt that didn't turn out so well. Gunther and his team go looking for the woman but are unable to find any trace of her, save for a slipper that she lost while making her escape.

Meanwhile, the torrential rains have torn through a cemetery, exposing several coffins, one of which breaks open. The deceased who had been laid to rest in the coffin years earlier, turns out to be a pile of rocks, leaving Gunther's team to figure out what in the hell ever happened to the guy who was supposed to be in the coffin.

As if those weren't problems enough, a former state politician suddenly turns up dead at his very expensive retirement/nursing home. The doctor on the scene attributes the death to natural causes, but when Gunther learns that the former pol was connected to the missing "Governor for a Day," the coincidence seems just too great and he orders an autopsy and a full investigation.

From that point, the story proceeds along two tracks as the acerbic Willy Kunkle investigates the case of the missing body, which will turn out to have important ramifications for Willy himself. Meanwhile, the rest of the team tackles the case of the missing "Governor" and the death of the former politician. All in all, it's an interesting and entertaining read. By this point, for those who have followed this series for years, any new entry is like renewing old friendships and here, as is almost always the case, Archer Mayor never disappoints.
Posted by James L. Thane at 9:17 AM No comments:

Colfer Dials Up Another

The Arctic Incident by Eoin Colfer
Reviewed by Jason Koivu
My rating: 3 of 5 stars

Child prodigy and criminal mastermind, Artemis Fowl is searching for his kidnapped father. He needs the help of the fairy police, and as it so happens, they need him. Law and lawbreakers work together in this fast-paced, humorous action-fantasy.

Eoin Colfer has created fun fairyland for the 21st century. It's a nice, soft blend of technology and fantasy, not too heavy on either count. The scope of his world is rather limited to Fowl's criminal human underworld and a sort of cartoonish MI5/police bomb squad fairy agency. We're talkin' smart pixies with fire-power!

Though the scope may be narrow, it helps to keep the plot super tight, and I ain't complaining about that. I could however complain that constant Go! GO! GO!!! can be just as bad as a book that goes nowhere. Much too of anything often dulls the senses. Later on in the book I found myself zoning out during the nonstop action.

This is book #2 in Colfer's Artemis Fowl series and many of the same characters reappear. That's understandable...to a point. For instance, the ground munching dwarf Mulch Diggums, a character I thought fresh and inventive when reading the first book, is used again and I felt it was unnecessary. You expect the main characters to return, but Diggums is not a principle player in the grand scheme of things. He's a fun character, but I think Colfer should've come up with something new there, otherwise it's like a comedian coming back for an encore and repeating the same jokes.

Perhaps I could've given this 4 stars for the fun factor, but aside from the complaints above, I also felt that the repetitious feel of the plot from book one to book two was too much. However, if you loved book one and are yearning for more of the same, you'll find it in spades in The Arctic Incident.

All Things Wise and Wonderful by James Herriot
Reviewed by Jason Koivu
My rating: 3 of 5 stars

Shit gets real this time around, all too real.

I was not thrilled with the start of All Things Wise and Wonderful, because from the get-go we learn that James Herriot is going to be writing about his wartime experiences. Frankly, I wanted more of the same - warm and fuzzy stories with a bit of low-tension drama about life as a country vet in the north of England as dished out in the first two books of this series.

However, instead of going fully into war stories, which would've been fine I suppose, what we get are remembrances of past vet calls mixed in with brief and mostly unsatisfactory tales of training for the Royal Air Force. The vet stories are told as flashbacks, which takes some of the steam out of them, while the RAF stories never really get off the ground.

Just the same, if you've read and enjoyed Herriot's work up to this point, don't let my complainy-pants squawking deter you from diving headlong into All Things Wise and Wonderful. You'll find plenty of enjoyment in the tales Herriot doles out for this volume. Warning though, the overall tone is more somber in this book compared with the first two. I guess that can't be helped, what with WWII being a focal point. But I must say I was blindsided by the story that ended (view spoiler)[in suicide (hide spoiler)]. That was a slap in the face after a lovely day out on the Dales!
Posted by Jason Koivu at 7:00 AM No comments: