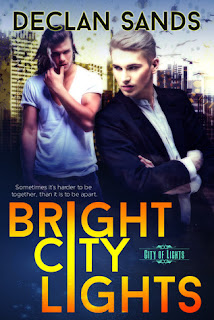 Sometimes it's harder to be together than it is to be apart.

Rabb is an alpha shifter, a werewolf, who likes to defy both the odds and authority. He prefers the city lights over the open spaces most shifters enjoy.

Brant is a politician with a secret that's becoming harder and harder to contain. As mayor of Bright City, he's determined to keep the city free of shifters to protect his secret.

The two men share a fair amount of distrust, along with a smoldering history that threatens to drag them under again. But when shifters begin to die in Bright City, Rabb and Brant need to find a way to work together again. Especially when one of them inadvertently steps right into the murderer's deadly path.

Rabb Miller is an alpha wolf-shifter who prefers city life to the quiet, nomadic existence preferred by other shifters. As mayor of Bright City, Brant South’s strict “no shifter” policy comes into conflict with Rabb’s desire to operate his legally obtained shifter bar. Early on, two of Rabb’s people are brutally murdered, and Rabb thinks Brant has something to do with it.

I loved the smoldering chemistry between the two men and the trust that gradually develops while they are working together to solve the murders of shifters. Their history and Brant’s secret created a lot of tension and conflict. A well-rounded cast of intriguing secondary characters adds depth and brings life to this story. The mystery was satisfying, and the story was well written and cleanly edited.

So why only 3 stars?

Immediately after reading this, I caught a bad cold and was sick for nearly a week. When I attempted to write this review after I felt better, I had to revisit many parts of the story to refresh my memory.

Though this story was fun and highly entertaining, there wasn’t a lot here that felt fresh or innovative. While I was satisfied with the character development, the setting felt a little insubstantial. I would have liked to know more about Bright City, and how shifters, vampires and humans came to inhabit it and how they handle the problems of discrimination and prejudice. At times, the story felt cluttered, making it feel more like the beginning of a novel rather than a short story. At other times, I felt there was so much more that could be explored.

Despite its flaws, this was an enjoyable story that was difficult to put down. I’m looking forward to revisiting these characters.
Posted by Nancy at 10:40 AM No comments: