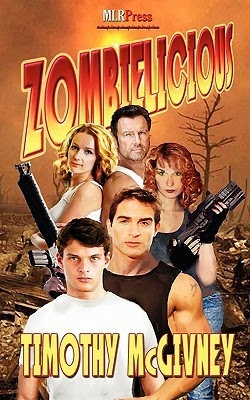 
Amidst a zombie outbreak, Walt, athletic and confident, meets shy and quiet Joey, the attraction between them both instant and electric. With strength in numbers, they band together alongside fellow survivors; Jill, an ex-porn star turned nurse who's made a startling discovery about her past; Ace, a disgruntled security guard who just can't live up to certain short comings; and Molly, the fiery redhead unwilling to give up on her dreams of stardom. In this apocalyptic new world of the dead, an anything-goes attitude has become the law of the land and lust, betrayal, true love and redemption are all just a gunshot away.


OK, I'll admit I have a weakness for zombie novels. Not that all of them are good, of course. Some move along at a breakneck pace, but the characters are so one-dimensional that it doesn't matter if they all die at the end. Others contain way too many boring, pseudo-scientific details about what caused the zombie contagion in the first place, and others contain zombies that are just not scary enough.

I'm happy to report that Zombielicious succeeded on all counts. The blurb and the cheesy cover art that reminds of B-horror films made me grin and I knew I was going to be in for a wild, action-packed, fun and lusty ride. I read the story in two sittings and loved the fast-paced and suspenseful action scenes, the suitably creepy zombies, the sad and touching moments, and the sizzling sex that was in turns tender, desperate, angry, and downright hilarious.

This story is told in the first person from the perspectives of five main characters, one character per chapter. This style worked well for me, as it made their stories more personal and made it easy for me to connect with them. It also worked well later on in the story, when the characters were together much of the time. It was nice getting differing individual perspectives on the same events.

There's Jill, an ex-porn star once known as Katie "Killer" Cummings who is now working as a nurse. There's Joey, who is a lab rat at a drug-testing facility in order to save enough money to get a place with his transgender friend, Ever. There's Ace, an ex-cop now working as a security guard who knows about Jill's past and harasses her every chance he gets. Then there's Walt and Molly, who are twins, and as different as night and day.

I enjoyed the easy interaction between the characters and though a couple of them were very unlikable, I was invested enough to care what happens to them. They live in a messed-up world where zombies are not the only danger.

In most of the zombie stories I've read, all the characters have died. The good news here is that Zombielicious ended with a glimmer of hope for the remaining survivors. I'm very much looking forward to the sequel.

If you're looking for a good time, great sex (gay and straight), a few good laughs, and lots of chills and thrills, then look no further.
Posted by Nancy at 5:00 AM 1 comment: