THE WIZARD OF EARTHSEA BY URSULA LE GUIN

A Wizard of Earthsea by Ursula K. Le Guin
My rating: 4 of 5 stars

”The hunger of a dragon is slow to wake, but hard to sate.” 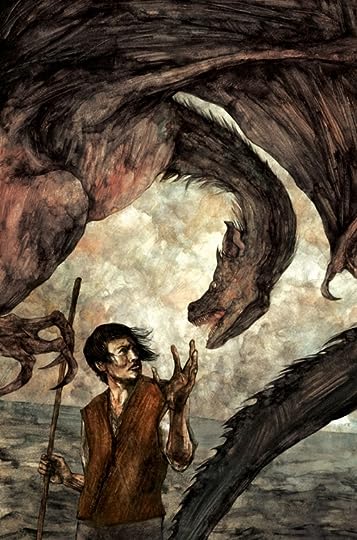 The Folio Society edition is superbly illustrated by David Lupton.

The boy is born on the island of Gont in the archipelago of Earthsea. This is a world infused with magic. Not everyone can control this magic, but those who know the right words and have a wizard soul can learn to utilize the power of the Earth to manipulate objects and events. The boy’s name is Duny; I can tell you that name because the name has no power over him. His true name is something he can only reveal to those he trusts absolutely beyond question.

I know his true name, but fair reader, I’m not sure yet that I can share it with you.

His aunt knows a few things, a handful of words, that can be used to bind things or call animals to her. Duny is particularly adept at calling falcons and other birds of prey. His agile mind soon surpasses what his aunt can teach him. He burns to know more. He is assigned to a mage, Ogion, who tries to teach him about the balance of magic with the Earth. There is always a cost for using magic. Understanding the levy for sorcery is the difference between being just impulsively talented and being wise about what you know.

”You must not change one thing, one pebble, one grain of sand, until you know what good and evil will follow on that act. The world is in balance, in Equilibrium. A wizard’s power of Changing and of Summoning can shake the balance of the world. It is dangerous, that power. It is most perilous. It must follow knowledge, and serve need. To light a candle is to cast a shadow….”

If the flap of a butterfly wing in the Amazon can cause a hurricane in Florida, imagine what a wizard can do with power over the weather.

It is kind of funny, but there is this one scene where wizards on different islands use spells to keep the clouds from raining on them. This storm bounces between them like a boiling stew pot. Now, a wizard like Ogion finds shelter under a tree and waits for the rain to stop. To Sparrowhawk, this type of restraint is ridiculous. If you have the power, why not use it?

Duny is Sparrowhawk, and you might think that is his real name, but just because you’ve read a few paragraphs of this review doesn’t mean you’ve endeared yourself to me enough to tell you his real name. Sparrowhawk will suffice for now.

Sparrowhawk becomes impatient with the restrained magic that Ogion teaches, so he is sent to magic school on the Island of Roke. There was a magic school in literature before Hogwarts?

The first time he goes to the dining hall to eat, there is only one table. The table, in a very Hogwarts’ fashion, expands to fit as many people who enter to eat. Sparrowhawk is soon recognized as one of the most gifted students. Spells and the names of things flow into his mind like lava, changing the landscape of his brain into something completely different.

He becomes vengeful on those who don’t appreciate his power.

In a moment of hubris, he summons a dead woman from the distant past and, in the process, opens a rift that nearly kills him. It does kill the old mage who helps him close it.

Sparrowhawk is burned in mind, body, and spirit. He is guilty of a death. The shame and self-condemnation weigh heavily on him. He may become the great wizard he was intended to be, but the road will be much longer now.

The shadow from another world that pursues him becomes the devil on his heels for the rest of the novel. This chase from island to island reminded me of Frankenstein and his pursuit of his monster to the North Pole.

The interesting thing about this novel is that Ursula K. Le Guin’s publisher came to her and asked her to write a book for older kids. Young Adult wasn’t even a term yet in the late 1960s. She wasn’t sure she wanted to write such a book, but she was nagged by the idea of where do great wizards come from? We normally meet them when they are old sages in the vein of a Merlin or a Gandalf. She wanted G__ erhhh Sparrowhawk to be seen as more human, more fallible than how most wizards had been presented before. I liked the emphasis she puts on the importance of words in this novel and the power and magic that resides in knowing the names of things.

I had trepidations about reading this book. I was reassured that I was in the capable hands of a writer I’ve enjoyed before. I have a bit of a knee jerk reaction to the term Young Adult because I’m not a Young Adult. I’m an old fuddy duddy who has a hard time watching commercials on TV geared towards youth. I certainly wince at the idea of spending hours trapped in a book intended for a younger audience. I’m somewhat alarmed at the number of ADULTS who read nothing but Young Adult. The evolution of a reader is for that person to move from picture books, then ride the escalator to Young Adult, and eventually find the elevator that will take them onwards and upwards to adult literature.

I’m still pondering this. Is it an extended childhood? Why would someone always want to read about children or teenagers? Am I generationally challenged on this issue? I am happy that people are reading, and ultimately it is better that they read anything rather than nothing at all, but I do think that the more you read there should be some evolution in what you choose to read. I’m such an eclectic reader that it is difficult for me to understood people being so genre specific with their reading choices. Young Adult now dominates the publishing world. Writers are being encouraged to make changes to their novels so they can be marketed as YA. If I weren’t worried about this trend it would be fascinating. 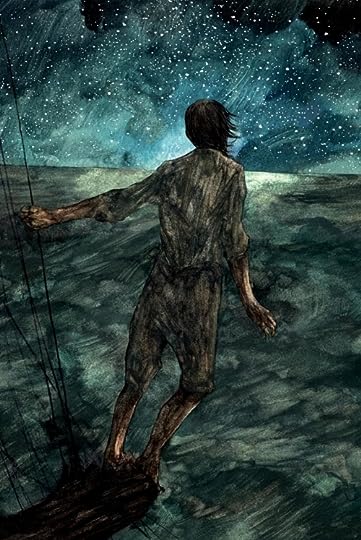 There are dragon battles, alluring women who try to seduce G_d to their own uses. There are friendships made and lost; there are painful realizations, and there is growth and acceptance of our own limitations. Most importantly, there is a wizard as wise and as powerful as Gandolf or Merlin, who emerges like a Phoenix from the flames of his own childish conceit. His name is Ged, but you must only whisper it, or better yet refer to him as Sparrowhawk, and keep in the locked box at the center of your heart who he really is. ”He hunted, he followed, and fear ran before him.”

Posted by JEFFREYKEETEN at 11:14 AM No comments: