I Am Not Myself These Days 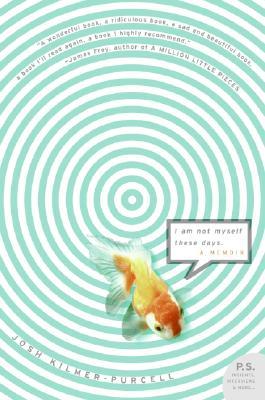 Josh Kilmer-Purcell
Harper Perennial
Reviewed by: Nancy
5 out of 5 stars


I Am Not Myself These Days follows a glittering journey through Manhattan's dark underbelly -- a shocking and surreal world where alter egos reign and subsist (barely) on dark wit and chemicals...a tragic romantic comedy where one begins by rooting for the survival of the relationship and ends by hoping someone simply survives.


I’m not much of a TV person and have never seen The Fabulous Beekman Boys or heard of Josh Kilmer-Purcell, retired drag queen. Still, I’m glad I found this little gem about two misfits in love. By day, Josh works for an advertising agency. At night, he lovingly and painstakingly transforms himself into Aqua, a 7-foot blonde beauty who carries goldfish around in her plastic boobs. His boyfriend, Jack, is a very well-paid escort known as “Aidan” to his clients, and lives in a posh apartment building guarded by doormen. The two guys enjoy a routine life of reading the paper together and ordering lunch from the deli, while listening to Jack’s beeper go off and occasionally running into his unusual clients.


“The truth is, there’s no movie of the week about a drunk drag queen and a crackhead hooker in love. There never has been. It’s not the kind of thing people would care about. People would flip right by the channel, either unbelieving or uncaring. Who’s the good guy? Who’s the bad guy? Aren’t they both bad? If they didn’t get what they deserved by the first commercial, it’d be on to the breast cancer movie.”


You’re so wrong, Josh. Right from the first page, I cared. I loved reading about your transformation to Aqua. You reminded me of my little brother, who got a kick out of trying on my mom’s dresses and heels. Your work hours and lack of sleep exhausted me, reminding me of my own hectic days working full-time, part-time, taking classes, and still finding time to party. You also reminded me of a close friend who appeared to be the happiest person in the world to everyone else, but drowned his pain in vodka. I loved your crazy and dysfunctional relationship with Jack in a city that has no mercy, yet is a haven for those who are different, and I loved your friendship with Laura and your relationship with your supportive mom who didn’t know the difference between transsexuals and drag queens.


“You know that if you want to have an operation that’s something you can talk about with your dad and me.”


Your story was beautiful, honest, and hilarious. If it wasn’t so darn funny, I would have cried.

Also posted at Goodreads.
Posted by Nancy at 1:34 PM No comments:

How long was Three in your head before you put pen to paper?
I had the seed of the story for a good couple of years, but I’d never been able to find quite the right home for it in terms of setting.  I ended up writing a short story that I thought was going to be completely unrelated but a few months after I finished it, I discovered it inspired some of the missing pieces for Three, and it all finally fell into place for me.

How did you hook up with Angry Robot?
I had the support of two great writers, Richard Dansky and Matt Forbeck.  They were both kind enough to point me in Angry Robot’s direction and provide the necessary introductions.  And then of course the Robot Overlords were kind enough to extend their Assimilation Forceps and everything is a little hazy after that, but from what I recall they’re the greatest publisher ever and we should be thankful for their soon and coming benevolent reign.

What are the big inspirations behind Legends of the Duskwalker?
In terms of themes and setting, the Classic Western I think is a pretty obvious one, with a splash of anime and cyberpunk mixed in.  I think the heart of the story, though, really comes from a personal desire to explore some ideas about sacrificial love and surrogate fatherhood.

How many books in the series do you have planned?
I’m finishing up the second now, and have the framework for a third.   I think after that I’ll probably take some time to see how my brain is doing creatively and whether or not people actually want more books in the series.  There are a lot of stories still to be told in that world, but I’m hesitant to get too far ahead of myself.

Who would you cast in a Three movie?
This is one I’d rather leave up to the readers’ imaginations.  I’m actually very curious to see how other people imagine the characters from the book.  Several of the people who read the early manuscript had wildly different ideas of what Three looked like, which I thought was awesome.

What are you reading now?
Well, I was supposed to save it as my reward for finishing The Sequel to Three, but I decided to sneak a peek at Wesley Chu’s The Lives of Tao.  I’m on Chapter 26 now.

What is your favorite book of all time?
Good grief, you’re not one for softball questions are you?  There are so many great books out there and so many I still have yet to read.  If I don’t overthink it though, I guess my reflexive answer is The Hobbit.  It has such a great mix of humor, adventure, danger, and wonder, and it manages a great balance between light and heavy things.  It’s probably the book I’ve read the most times in my life.

What writer would you say is your biggest influence?
Probably unsurprisingly, I would guess J.R.R. Tolkien, though I think I’m more influenced by how he thought and talked about writing than I am by his actual (legendary) works.  When I get stuck, I don’t really ask myself “What would Tolkien do?” or anything (because if I did I’m pretty sure the answer would be “He’d do something you are incapable of because he’s a genius and you’re a hack!”), but I’ve read some of his essays and lesser known works, and just found a lot of what he had to say about Story to be compelling and personally significant.  His essay On Fairy Stories in particular meant a lot to me.  Also, in the foreword  to one of the editions of The Lord of the Rings that I have, he recounts the difficulty he had in completing it (over a 13 year period) and his honesty throughout that piece helped me realize that a lot of the doubts I’ve faced as a writer weren’t mine alone.

Is there a particular book that made you want to be a writer?
I can’t think of a single, particular book that made me want to be a writer, and I really can’t even identify a specific time where I felt like I suddenly decided “I want to be a writer!”.  I’ve pretty much always enjoyed making up stories, and I think it was more of a gradual discovery for me to think that maybe I could take writing more seriously and do it professionally.  I grew up reading a lot of Margaret Weis and Tracy Hickman’s work, and I remember using my assigned journal time in middle school to write short stories in a similar vein.  It wasn’t really until I was in my twenties though that I decided to give it a shot as a profession.

What is your favorite post-apocalyptic book, movie, and video game?
The Road by Cormac McCarthy (book), The Road Warrior (movie), and The Last of Us (video game).  I really appreciated how The Road handled making such small things significant.  And of course watching The Road Warrior is pretty much a rite of passage.  I actually haven’t gotten to spend very much time playing The Last of Us yet, but already from the little bit I’ve played, I just feel like Naughty Dog did an amazing job of capturing the feeling of a post-apocalyptic world while keeping it accessible.

Any non-Duskwalker books in the works?
I have several projects on various back- and side-burners.  The Duskwalker series is definitely my focus for now and the immediate future, but I have a more military sci-fi thing that I’d like to put more time in eventually.  I also have more of a fantasy-type thing that’s been lying dormant for a number of years that I would like to get back to one day.

Any words of wisdom for aspiring writers?
Get in the habit of writing every day (or five days a week), even when you don’t feel like it.  Maybe especially when you don’t feel like it.  Writing is a lot like exercise, and if you can stick with it and make it a habit, you’ll eventually find that you feel weird if you go a day without writing.  And of course, the most important thing to remember: no one can actually keep you from being a writer but you.

Special Bonus Feature:
Angry Robot is giving away two signed copies of Three.  Each stop on this Blog Tour of Three by Jay Posey has a unique question.  Be sure to enter your answers into the giveaway by dropping by My Shelf Confessions and enter your answers in the rafflecopter widget! You can answer as many or as few as you like as each answered question gets you an extra entry!

Here's the questions for my stop: Question #3  "What genre does Three get filed under?"

Posted by Dan Schwent at 2:00 AM No comments: