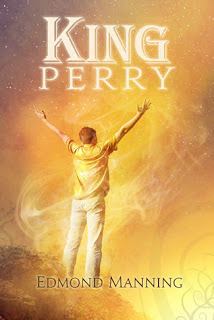 In a trendy San Francisco art gallery, out-of-towner Vin Vanbly witnesses an act of compassion that compels him to make investment banker Perry Mangin a mysterious offer: in exchange for a weekend of complete submission, Vin will restore Perry's "kingship" and transform him into the man he was always meant to be. Despite intense reservations, Perry agrees, setting in motion a chain of events that will test the limits of his body, seduce his senses, and fray his every nerve, (perhaps occasionally breaking the law) while Vin guides him toward his destiny as "the one true king." Even as Perry rediscovers old grief and new joys within himself, Vin and his shadowy motivations remain enigmas: who is this offbeat stranger guiding them from danger to hilarity to danger? To emerge triumphant, Perry must overcome the greatest challenge alone: embracing his devastating past. But can he succeed by Sunday's sunrise deadline? How can he possibly evolve from an ordinary man into King Perry?

This story frustrated me initially, as I had no idea where it was going and I expect a certain kind of predictability in romance stories. I was afraid it was going to be a feel-good story, the kind that is anathema to my cynical heart. Though I was tempted to set it aside a few times, my curiosity got the better of me and I pressed on. Grudgingly, I opened my mind and my heart and embarked on an unforgettable journey that begins in a San Francisco art gallery.

Perry Mangin is an investment banker who lives relatively well in one of the most expensive cities on earth. Vin Vanbly, an auto mechanic from Minnesota, knows quite a bit about art and takes an interest in Perry. Though Perry seems not to want for anything, he has issues that prevent him from getting close to others.

I was on vacation in Montreal while reading this story and was only able to get through bits and pieces at a time. Though I wanted to devour it in one sitting, this way allowed me to integrate Perry’s experiences with my own, observing people more closely, finding common connections, and feeling a part of the fabric of the city rather than a mere explorer. Well, except for the cute duck and the wild sex, of course.

Vin’s mysterious nature, while bothersome at first, grew on me, as I realized that every single action he took, no matter how bizarre, was for Perry’s own good. His sexy charm, his humor, his way with words, and the way he seemingly knew more about Perry than Perry knew of himself endeared me to him.

King Perry is definitely not a romance in the traditional sense, but it is a story about love of the deepest kind. It made me laugh and made me cry, sometimes at the same time. It warmed my heart, dredged up some father issues and brought buried feelings to the surface. I was happy for Perry, but sad for Vin, who could not forgive.

Maybe one of these days I will forgive my own father, maybe not.
Posted by Nancy at 10:04 AM No comments: