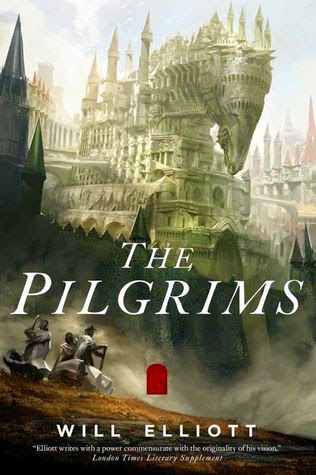 The Pilgrims
by Will Elliott
Published by Tor

**I received a free copy of The Pilgrims from Tor in exchange for an honest review.**

Ah, the fantasy quest novel. Been a while since we've bumped into each other, but, damn, we used to have some good times when I was a teenager. I swear you haven't changed a bit since the last time I ran into you. So, anything new with you? No, not really? Still just rambling off down the road to adventure, eh? Meet a mage or two, maybe some stone giants, a few angels? Choose some ordinary schmuck to save the world from an omnipotent evil overlord hellbent on world domination? So, nothing new in your bag of tricks? Well, it was good seeing you . . . maybe we can meet up again sometime and you can tell me the same predictable tale. No, no--don't call me, I'll call you. Take care now! Buh-bye.

Yeah, I'm a little jaded when it comes to the fantasy quest. Granted, I cut my teeth on this genre, so folks who are new to fantasy may enjoy this tale far more than I did. The only way I enjoy this type of novel these days is if it's a new, inventive twist on the standard journey through a world that is not our own. Unfortunately, The Pilgrims by Will Elliott never rises above the formulaic presentation of an unlikely hero going on an unlikely adventure.

Eric Albright and his homeless friend, Case, find themselves in a strange world after opening a door that appears on a London bridge. In this new world, Eric and Case have the instant ability to both understand and speak the languages of all its denizens. Joining a merry band of rebels against Vous, the man who would be a god, Eric and Case meander without much purpose, encounter all of the aforementioned creatures and then some, and do little to endear themselves to the reader. Eric becomes convinced that he's meant to be a savior--though does little to prove it other than occasionally picturing himself as Batman. While the fantasy world created by Elliott has some intriguing elements, they fail to stand out when surrounded by so many cliches. The characters themselves are also flat, especially Eric, who seems so at ease with this strange place and his role in it that the narrative loses the tension created by a character confused by and at odds with his new surroundings.

Another strike The Pilgrims has against it is the "door between worlds" trope. I've mentioned in other reviews that I usually find this to be a charmless, hackneyed plot device. I despise The Wizard of Oz, Chronicles of Narnia, and Alice in Wonderland. The only time it has worked for me is in Neil Gaiman's Neverwhere and in the movie Labyrinth (and that probably has more to do with David Bowie in tight pants than anything else . . .). So when our hero, Eric Albright, opens a door between our world and that of Levaal without immediately find a well-endowed Bowie on the other side, well, you can imagine my disappointment.

And, finally, the third strike: The Pilgrims is a standard quest novel that for, inexplicable reasons, has been split into a trilogy. Here's what I hate about series quests: the first book will be all "a questing we will go, a questing we will go, no resolution, yo, a questing we will go"; the second book will continue in the same vein until the last 50 pages when, wtf, you mean shit's going to start happening now?; and the last book, if one makes it that far, might actually be fairly decent. But the reader has to drag ass through the first two books before there's any payoff in sight. I don't like to be toyed with thus.

So, if you're new to fantasy, you might want to give The Pilgrims a whirl, but fantasy veterans need not apply.
Posted by Amanda at 5:30 AM No comments: