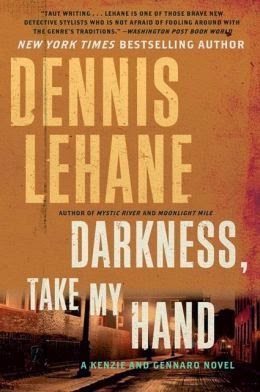 
The master of the new "noir," Dennis Lehane magnificently evokes the dignity and savagery of working-class Boston in this terrifying tale of darkness and redemption.

Patrick Kenzie and Angela Gennaro's latest client is a prominent Boston psychiatrist running scared from a vengeful Irish mob. The private investigators know something about cold-blooded retribution. Born and bred on the mean streets of blue-collar Dorchester, they've seen the darkness that lives in the hearts of the unfortunate. But an evil for which even they are unprepared is about to strike as secrets long-dormant erupt, setting off a chain of violent murders that will stain everything--including the truth.

This second book in the Kenzie/Gennaro series is even better than the first. It retains some of the humor of the first, but is considerably darker and more violent. Bubba, the one-man army who cares for no one but Patrick and Angie, has a much more significant role which involves a fire hydrant and a bowling alley. Angie’s abusive ex-husband, Phil, has quit drinking and starts to show his decent side to a point where I actually began to like the guy. Patrick now has a steady girlfriend, his friendship with Angie deepens, and we learn more about his abusive father. Angie and Patrick are hired by a psychiatrist who received a picture of her son in the mail from a stranger and now believes her son is in danger. The psychiatrist mentions a mysterious student who shares Patrick’s last name and is a girlfriend of someone in the Irish mafia.

This case is not so simple. There are lots of twists and turns, more pictures, mysterious and gruesome deaths, the mafia, a convict serving life in prison, a college professor with a secret life, vicious and depraved serial killers, and atrocities from the past tainting the present.

So, after reading this book I had a crazy-ass dream that made me bolt out of bed at 3:00 in the morning, feeling shaky and nauseated. Even after I was fully awake, I swear I could hear people bowling.

In the dream I was walking into my office at work. I saw someone’s head dangling from the suspended ceiling, then I saw an arm hanging off a filing cabinet and a leg in the blue recycle barrel in my office. In the conference room were fingers, toes, and male parts arranged in various shapes on the table. I ran screaming down the hall and into this big dude who looked like Bubba. He was looking for my boss. I told him that my boss was in a meeting all day. He didn’t believe me and wanted me to take him to my office. When I refused, he yanked my arm hard, pushed me ahead of him and wanted to know why there was blood all over my shirt. When we got to my office, he went to my desk and found a bloody stiletto. I screamed at him, telling him I had no idea how any of this happened. He said he had to make a few phone calls and made me sit in the conference room. While I was waiting, I picked up two small jars of paint, one gold and one silver, and proceeded to paint the male parts, fingers and toes that were arranged so perfectly on the table.

OK, so I’m recovered now. I am hoping the next one won’t disturb my sleep.

Also posted at Goodreads
Posted by Nancy at 9:07 AM No comments: