What's in a Face? 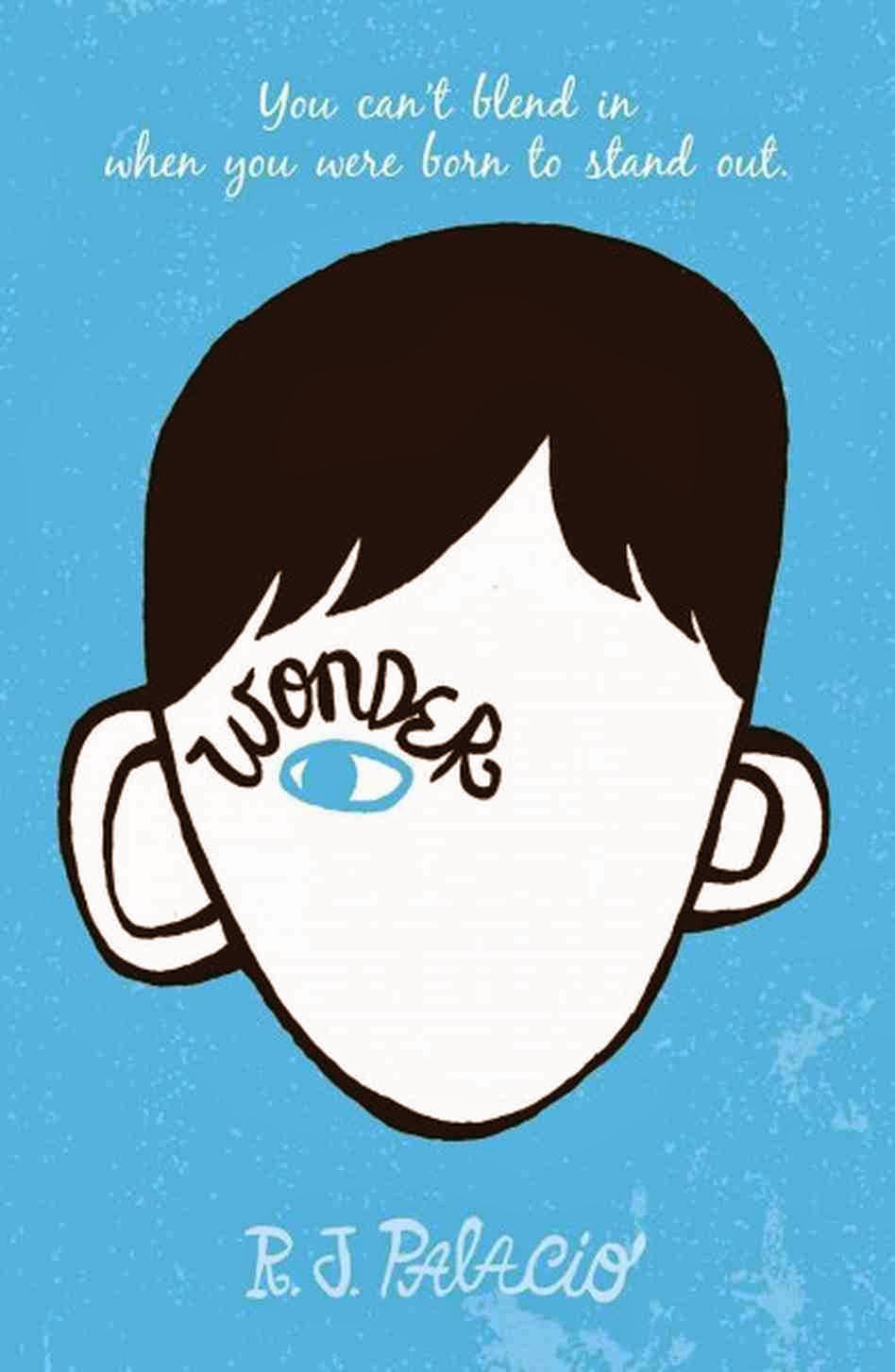 
Wow, I wish this book had existed when I was in 5th grade. It would have been a comfort while dealing with bullies.

This kind of great Young Adult writing has revived my faith in the genre. Last year I read two popular YA novels and I hated them so much that I was ready to swear off the whole damn category. But this book is so lovely and bittersweet that I am glad I gave it a chance.

"Wonder" is the story of 10-year-old August, who was born with a severe facial deformity. This is his introduction:

"I know I'm not an ordinary ten-year-old kid. I mean, sure, I do ordinary things. I eat ice cream. I ride my bike. I play ball. I have an Xbox. Stuff like that makes me ordinary. I guess. And I feel ordinary. Inside. But I know ordinary kids don't make other ordinary kids run away screaming in playgrounds. I know ordinary kids don't get stared at wherever they go. If I found a magic lamp and I could have one wish, I would wish that I had a normal face that no one ever noticed at all. I would wish that I could walk down the street without people seeing me and then doing that look-away thing. Here's what I think: the only reason I'm not ordinary is that no one else sees me that way."

August has been homeschooled until now, but his parents want him to branch out and enroll him in 5th grade. August has a good sense of humor and makes a few friends at school, but most of the students avoid him, and a few are downright mean. The novel follows August through the school year, and there are many ups and downs, which I shan't spoil. By the end of the book, I was a blubbering mess and I couldn't finish reading without wiping my eyes every half-page.

I really liked the writing in "Wonder" -- it's smart and complex for YA, and it didn't dumb down the material. I also liked that it gave different perspectives. Most of the book is told from August's point of view, but we also get to read the thoughts of his sister and of some friends, which fleshed out the story.

One chapter that was especially powerful was about Halloween, which August loves:

"For me, Halloween is the best holiday in the world. It even beats Christmas. I get to dress up in costume. I get to wear a mask. I get to go around like every other kid with a mask and nobody thinks I look weird. Nobody takes a second look. Nobody notices me. Nobody knows me. I wish every day could be Halloween. We could all wear masks all the time. Then we could walk around and get to know each other before we got to see what we looked like under the masks."

Another highpoint (and where I needed several tissues) was August's graduation day. The principal makes a speech referencing a quote from J. M. Barrie:

It's a wonderful, beautiful little novel. I hope more people give it a chance.
Posted by DianeLibrarian at 6:00 AM No comments: 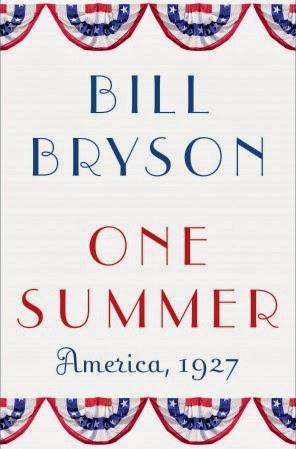 
This is a fun and interesting look at America in the 1920s, but specifically the summer of 1927. It is remarkable how much happened in a few short months:

"Babe Ruth hit 60 home runs. The Federal Reserve made the mistake that precipitated the stock market crash. Al Capone enjoyed his last summer of eminence. The Jazz Singer was filmed. Television was created. Radio came of age. Sacco and Vanzetti were executed. President Coolidge chose not to run. Work began on Mount Rushmore. The Mississippi flooded as it never had before. A madman in Michigan blew up a school and killed 44 people in the worst slaughter of children in American history. Henry Ford stopped making the Model T and promised to stop insulting Jews. And a kid from Minnesota flew across an ocean and captivated the planet in a way it had never been captivated before. Whatever else it was, it was one hell of a summer."

I've always loved history, and Bryson does a marvelous job of weaving together different stories and putting events in context. For example, Prohibition was still going on in 1927, but Bryson goes back to 1920 and explains how it came about. Or take the story of Charles Lindbergh. Before Bryson covers that first famous flight to France, he gives a brief history of aviation and explains how deadly and dangerous it had been. Those kinds of details really make the book fly, if you'll forgive the pun.

There are so many interesting stories in this book, but here are the Top 5 Things I Learned from One Summer:

1. That Henry Ford was an ignorant jackass. "He was defiantly narrow-minded, barely educated and at least close to functionally illiterate. He did not like bankers, doctors, liquor, tobacco, idleness of any sort, pasteurized milk, Wall Street, overweight people, war, books or reading, J.P. Morgan and Co., capital punishment, tall buildings, college graduates, Roman Catholics or Jews."

2. How ridiculous Prohibition was, and that it lasted for 13 years! "The 1920s was in many ways the most strange and wondrous decade in American history, and nothing made it more so than Prohibition. It was easily the most extreme, ill-judged, costly, and ignored experiment in social engineering ever conducted by an otherwise rational nation... It made criminals out of honest people and actually led to an increase in the amount of drinking in the country."

3. That Babe Ruth was a hot mess. "The most brilliant, headstrong, undisciplined, lovable, thrillingly original, ornery son of a bitch that ever put on a baseball uniform."

4. How widespread bigotry was. "Of all the labels that were applied to the 1920s -- the Jazz Age, the Roaring 20s, the Age of Ballyhoo, the Era of Wonderful Nonsense -- one that wasn't used but perhaps should have been was the Age of Loathing. There may never have been another time in the nation's history when more people disliked more other people from more directions and for less reason."

5. The incredible impact that American films had, especially after talking pictures were created. "Moviegoers around the world suddenly found themselves exposed, often for the first time, to American voices, American vocabulary, American cadence and pronunciation and word order. Spanish conquistadores, Elizabethan courtiers, figures from the Bible were suddenly speaking in American voices — and not just occasionally but in film after film after film. The psychological effect of this, particularly on the young, can hardly be overstated. With American speech came American thoughts, American attitudes, American humor and sensibilities. Peacefully, by accident, and almost unnoticed, America had just taken over the world."

I listened to 70 percent of this book on audio CD, and then my car CD player broke. While I enjoyed finishing up with a printed copy, I did miss Bryson's voice. If you like audiobooks, I highly recommend his narrations.

I've lost track of how many Bill Bryson books I've read, but it's never enough. I love his humorous and clever style, and I hope he keeps writing for several more decades.
Posted by DianeLibrarian at 5:00 AM No comments:

The Walls of the Castle

The Walls of the Castle by Tom Piccirilli
My rating: 4 of 5 stars

A man named Kasteel lives in the Castle, the hospital where his son died, so wracked with grief that he cannot leave...

So I got this as a reward for contributing to a Black Labyrinth Kickstarter to finance a new Joe Lansdale book. I'd heard of Tom Piccirilli before but never read him.

This was a pretty good little novella. Kasteel is a criminal who secretly lives in the hospital where his son died, acting as a guardian angel to the patients rather than letting go of his grief and going home to his wife.

The Walls of the Castle is a psychological atmospheric novel that is mainly about dealing with grief and loss. In Kasteel's case, he deals with it with violence, intimidation, and hiding from the world. Once he's convinced Abbadon, the Angel of Death, is also lurking in the hospital, the story gets even more intense.

The story read like a dark, violent Twilight Zone episode. I think it would look great filmed in black and white.

I had to dock a star because the ending felt really abrupt. I hope Kasteel remembers his name and leaves the hospital one day. Four out of five stars.

The Trial by Franz Kafka
My rating: 4 of 5 stars

On his thirtieth birthday, bank employee Josef K. is arrested for an unknown crime and prosecuted on certain Sundays by an unknown agency.

Yeah, that's a pretty vague teaser but how else do you drag someone into The Trial?

On the surface, The Trial is an absurd legal drama that nicely illustrates how inept bureaucracy can be. However, my little gray cells tell me that's just the tip of the iceberg. The Trial seems to be about how incomprehensible and absurd life can be at times. I don't think it's a coincidence that The Trial kicks off on Josef K.'s 30th birthday.

Kafka's writing is stripped down but still powerful. Aside from The Metamorphosis, the tone reminds me a bit of G.K. Chesteron's The Napoleon of Notting Hill. The book feels like a Monty Python sketch at times. I caught myself grinning on occasion and not really sure if that was the appropriate reaction.

The Trial isn't just about Josef's trial, it's also about the trial the trial becomes in Josef's life. And isn't life just one big trial anyway?