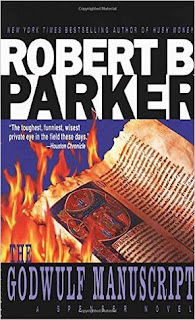 "The office of the university president looked like the front parlor of a successful Victorian whorehouse."

Thus opens the novel that introduced Robert B. Parker's most famous creation, Boston P.I., Spenser. Spenser was a former cop who'd been fired for insubordination, and he was also a veteran of the Korean War. When The Godwulf Manuscript was published in 1973, he was apparently somewhere in his middle forties, which means that when Parker wrote his last contribution to the series in 2011, Spenser would have been in his early eighties. With the publication this year of the latest book in the series, written by Ace Atkins, Spenser would be pushing ninety.

For a guy that old, he still does amazingly well. More important, for a series this long--now forty-five books--the character and the concept have held up very well. Truth to tell, the series had begun to falter a bit toward the end of Parker's life, but Atkins has put it back on track and restored it to its former glory.

From the beginning, as suggested by the opening sentence above, Spenser was a world-class smart ass. He was also a very tough guy, wise to the ways of the world, and, naturally, hugely attractive to the ladies. He worked by his own rules, and for Spenser, the ends almost always justified the means. He was a very worthy successor to the generation of tough-guy P.I.s who had come before him.

In this case, a very valuable manuscript has been stolen from a Boston University. The manuscriptnappers are asking $100,000 for its safe return, but this is not one of the more stellar universities for which Boston is known. They don't have a hundred grand, and so the university president hires Spenser to get the manuscript back.

Spenser's main lead is to a group of campus radicals. Almost immediately, someone is murdered and the stakes are raised significantly. The murder and the theft are obviously related, and Spenser soon finds himself caught between the university officials, the cops, some local mobsters, a lot of uncooperative students and a particularly nasty faculty wife. Naturally, none of these will pose any significant problem for Spenser, but things will get very dicey along the way.

Rereading the book after a very long time was a lot of fun, and it's held up very well, especially for a book that's now forty-three years old. Mainly that's because the character of Spenser seems somehow almost timeless and the story moves along so well that you don't even stop to think about all the modern technology that Spenser doesn't have at his beck and call.

The character is obviously not fully formed yet. A couple of characters are introduced who will accompany Spenser through the entire run of the series, but Parker is still feeling his way along here, and it was interesting to go back and see the character again as he initially appeared.

This is the book in which Spenser meets Brenda Loring, who will be his first significant love interest. I liked Brenda a lot, and like many another fan of this series, I rue the day when she disappeared from the series only to have Spenser wind up with the insufferable Susan Silverman. Happily, that doesn't happen for a while, which is one of the reasons why so many of the early books in this series are among the best of the lot. All in all, this was a great trip back down Memory Lane.
Posted by James L. Thane at 8:56 PM No comments:

Sins of Empire by Brian McClellan
My rating: 4 of 5 stars

Fatrasta is a nation at conflict with itself. It subjugates a people group and their desire for equality. The Lady Chancellor uses not only her secret police the Blackhats, but also employs the Riflejack Mercenary Company led by Lady Vlora Flint. Fatrasta has also buried it's heroes who helped win them freedom, most notably Ben Styke. Styke has spent 10 years rotting in a Fatrastan labor camp. Fatrasta's problems may be worse than they initially feared, as a long silent threat appears to have returned along with an object best left buried.

I have to say before I even begin that I was worried I wouldn't like Sins of Empire or the new series. My reason being is that Field Marshal Tamas was far and away my favorite character in the Powder Mage trilogy. I wasn't sure if I'd enjoy the storytelling with him gone, especially as my other favorites Bo and Ka-poel were no where to be seen. Even worse the only character mentioned returning from the original trilogy was Vlora who I didn't care for.

As Sins of Empire began my worries seemed more reasonable as the story largely resembled Promise of Blood. The story has a mysterious man causing trouble in Gregious Tampo. Tampo seemed largely similar to Vetas from the intital trilogy. It also has a spy investigating in blackhat Michel Bravis who was similar to Inspector Adamat. Around the halfway point in the novel, I have to admit I had no idea what I was in for. Brian McClellan borrowed some familiar elements, but they didnt lead to the same results at all.

Sins of Empire is a massive story with many moving parts and various characters. In many ways it's a mystery as multiple investigations are going on that play massive parts in the story being told. I didn't particularly love any one character, but the book played out as a true ensemble cast.

Any reader who came to enjoy Brian McClellan's Powder Mage trilogy owes it to themselves to read Sins of Empire. It was a strong start to a new trilogy.