Thomas Cromwell: Servant to Henry VIII by David Loades
My rating: 4 of 5 stars

”Master Cromwell...you are now entered into the service of a most noble, wise and liberal prince… you shall in your counsel given unto his grace ever tell him what he ought to do, but never what he is able to do...for if a lion knew his strength, hard were it for any man to rule him.”
---Sir Thomas More 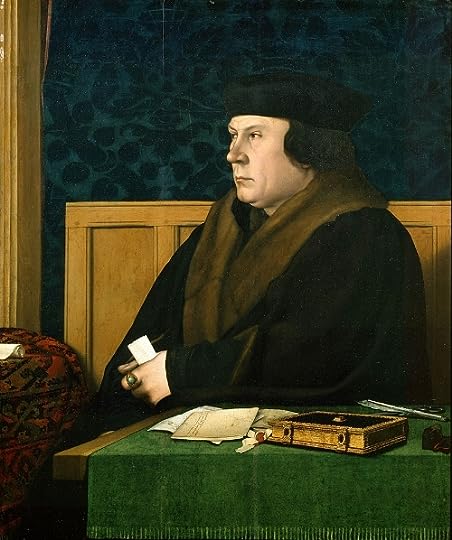 Thomas Cromwell has been dead for 478 years, yet his name still evokes a smidgen of fear in my belly. He became so powerful at one point that people discussed very quietly the two-headed beast (Henry VIII and Cromwell) running England. Right up until the point that Cromwell is hauled away to the Tower, he was the most influential advisor to the king.

Cromwell’s problem was he got mixed up in the business of the wives of the king, and when he was able to do exactly what Henry wanted, which was usually to clear the way for the next one, he was fine, but once he showed some resistance to one wife being booted for another, then he was subjecting himself to the wrath of one of the most petulant, self-indulgent kings to ever wear an English crown.

And believe me that is saying something.

The fascination that people have with Henry VIII and his wives never seems to wane. I’ve never been a fan of the Tudors. I feel my lip curl up in a grimace, or maybe the beginnings of a snarl, every time I run across some reference to the bloated pisspot.

I can only say that because Cromwell is dead. His large ears are long stilled.

Is that a pounding I hear at yonder door?
Just the wind.

I do though have a fascination with the enigmatic, hyper intelligent, ruthless Thomas Cromwell. He rose as high as a self-made man of low birth can rise. His first boss, Cardinal Thomas Wolsey, valued his counsel and his adaptability to situations. Wolsey fell out of favor with Henry VIII when he failed to achieve the annulment of the king’s marriage to Catherine of Aragon. Anne Boleyn, that mischievous, ambitious, cock-tease, convinced Henry that Wolsey was dragging his feet in the process. She was not a patient woman, but then maybe she was starting to run out of excuses to keep Henry from plucking her rose before she had a crown nestled down on her auburn tresses. 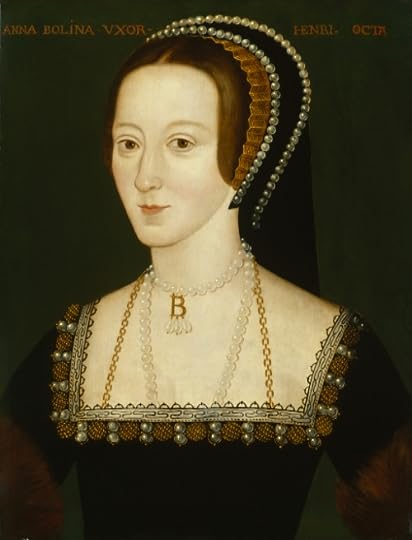 I’m sure Cromwell took note of the downfall of Wolsey, so it is interesting that he too became a victim of kingly, pettish, spousal dissatisfaction.

Is that the sound of mail-clad fingers tapping at my window?
For the love of all that is holy, it is but an errant branch from a maple tree.

With the major religious schism that Henry caused, along with his dissolution of the monasteries and nunneries, he made many enemies domestically and abroad. As he lopped off the heads of wives, it also became more difficult to find an alliance with a foreign power. Kings were known for using their daughters unmercifully as political pawns, but even the most hard hearted father would have a difficult time subjected his daughter to that ulcerated, fickle headed, imbecile in England.

My Scottish Terrier has just raced to the drawbridge. I can only hope she can hold them off long enough for me to finish and post this review. There will be some bloody ankles, I’ll wager, before they can reach my chamber door.

Cromwell survived the beheading of Anne Boleyn, despite the fact that she was instrumental in his rise to high office. David Loades said it was her head or his, but I think it was more a matter of both their heads rolling together, so it was only practical to save the one that could be saved, his own. A wagon tethered can be quickly untethered, as Cromwell later learned with his own “supporters” when his time came. Next was Jane Seymour, whom Henry married one day after Anne’s head rolled across the stone pavers of the Tower. Seymour gave Henry a son.

Hallelujah! God be praised. Peace can now reign upon the land.
Not quite.

Seymour died in childbirth and became the only one of his wives to receive a queen’s funeral. As much as I hate to attribute any human qualities to Henry, I do believe he truly mourned the death of Jane. She never had a chance to displease him, and she did give him that much cherished son, sickly and fragile though he be, who would hopefully secure the throne of England in Tudor hands. After all, there were still plenty of Plantagenets lurking about. Usurpers, who Henry’s father was, as he took the throne by conquest from the last Plantagenet king, Richard III, never rested easy in their hold on power.

Usurpers are like everyone else beset by insecurities; most of us would fit that description, who believe that any minute some toothless crone from the back of a ruly crowd is going to yell the words…FRAUD. 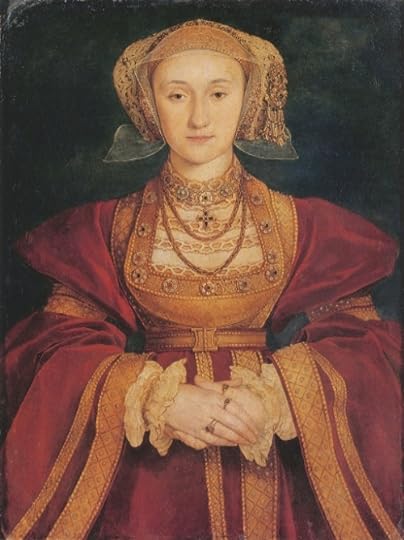 Anne of Cleves by Hans Holbein. She may not have the face that launched a thousand ships, but still, come on Henry, she’s not mugly!

So Cromwell was not resting easily with the future of the kingdom residing on the slender, shaking shoulders of Henry’s son, Edward, and pressed Henry to remarry. The Duke of Cleves was in dispute with the Holy Roman Emperor Charles V, with whom Henry was having issues, but then who didn’t he have issues with? So the Duke’s daughter, Anne, was a good strategic match on paper. Henry did dispatch the court painter, Hans Holbein, to get real likenesses of all the potential queens of England. Either Holbein was too flattering in his portrayal of Anne or Henry was just not mentally in the mood for the match from the beginning. You have all heard of love at first sight. Well, Henry experienced loathing at first sight. Months later, he swore the marriage was never consummated due to the inability of Henry to mask his repugnance long enough to get the English flag to rise.

He might have tried extinguishing the candles, lying back, and thinking of England.

Meanwhile, Henry became enamored with the 17 year old Catherine Howard, who seemed to have put the lead back in the royal poxy pencil.

I cannot deny the battering at my door. I must hurry!

So…”Cromwell was quite prepared to act ruthlessly, even when political and religious issues were not involved, but he was always concerned to use the due process of the law.” David Loades talked about what is known of the statesman and how little is known of the man himself. Hilary Mantel explored the man more than the statesman in her excellent duo of books Wolf Hall and Bring up the Bodies. We saw the charitable man (he fed 200 men and women every day at his house, an early soup kitchen) and the man interested in intellectual pursuits. I couldn’t help but like, nay love, the man whom Mantel shared with us. Can a man be so ruthless in his politics and so kind in his private life?

Loades did an excellent job of separating the myth from what can be proven and painted a portrait of a man who was the consummate loyal official. Cromwell, in the course of the dissolution, made sure that Henry retained enough lands to make him rich enough to not have to go begging for money from the royal families and made sure that those same families were rewarded with enough land that they would have to support the crown in the future. He made Henry the first English king to be Royal Supreme. 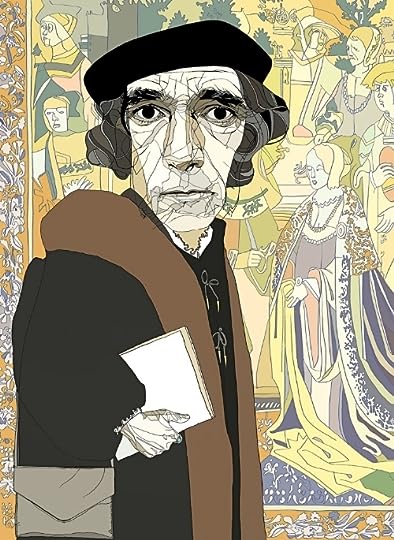 Thomas Cromwell, a man of no illusions.

Cromwell’s head was rather sloppily parted from his body. The executioner must have been an incompetent fool, or maybe Cromwell whispered in his ear that he would be coming for him from the afterlife and that made his hands slippery with sweat, but either way it was a botched job. Henry was soon remorseful at his impetuous, foolish decision to execute Cromwell. ”It was not long before Henry was regretting his precipitate action in getting rid of him. Policy continued to be in the king’s hands, but government would never be the same.”

Unhand me, you loutish brutes! A pox on all your whoreson houses! Could someone please send books to The Tower?!?!

Posted by JEFFREYKEETEN at 1:04 PM No comments: