A Double Shot of Hinkson. 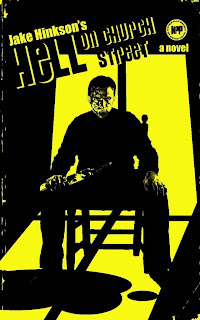 While leaving a corner store and getting into his vehicle, Geoffrey Webb is shocked to see a man sitting in the passenger seat brandishing a hand gun. The would-be attacker demands Webb’s money but rather than going along with it, Webb decides to take the offensive. He doesn’t attack his assailant but rather chooses to go on a long drive and recount his days as a youth minister of a small Arkansas town. Threatening to crash the car if the crook doesn’t listen, Webb is finally able to clear the air surrounding his time in the cloth.

This is one hell of a debut novel (pardon the pun), let me tell you. Jake Hinkson has unleashed a story that will stick with me for years to come. I was so engrossed in the story, that I lost sleep after I finished it. I couldn’t help thinking about the way Hinkson writes violence – it was just so damn raw. Hey, I can’t speak to the authenticity of a murder scene but I truly felt right there in the room when it was happening. You know that feeling when you’re watching a horror movie and the cheerleader is about to walk into a room and even though you can’t communicate with her, you just want to will her not to do it. Hinkson takes that feeling and dials it up to eleven.

“Then again, the third fundamental truth of life is this: to 99.9% of the world you don’t exist. I’m not being self-pitying when I say that because I’m talking about you. You do not exist to most of the rest of the world. How many people even know you’re alive? Of those, how many care? Don’t add it up if you’re the type that gets easily depressed.”


I shouldn’t throw all the praise on the suspenseful or violent scenes as there’s lots in here to shed a spotlight on. Webb wasn’t exactly interested in being a youth minister, as at heart, he’s a con-man. He looked at a career in religion as being a job where you can get the most out of doing the least amount of work. Our narrator is a cynical man believing that people only want to talk to someone who shares their prejudices or someone who is going to tell them exactly what they want to hear, he thinks he has it all figured out and truthfully, he does, until everything goes awry.

“There’s a level of trouble you can’t talk your way out of,” he said. “Some trouble is like a cancer. It just grows inside you. Nothing stops it. It just keeps growing and growing, eating everything it touches.”


While he’s excellent at deceiving those around him, Webb soon learns how hard it is to perform damage control. Getting his roots into the community and becoming the mindless, suck-up that everyone loves happens quicker than walking up an escalator, the true talent comes in keeping up the act when something outside of his plan materializes. For this, all that is needed is one person to doubt his sincerity, to see him for who he truly is, to drive him mad in an attempt to keep everything together. There’s nothing a con-man can’t stand more than someone who is immune to his charm. Webb’s interactions with those who see through him are intense and add so much to his character.

Hell on Church Street is the second novel I’ve read from publisher New Pulp Press. If both this novel and Matthew McBride’s Frank Sinatra in a Blender are any sign of the quality of work this company is putting forth, I need to get some more of it. 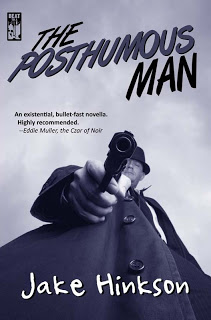 Elliot Spilling wakes up in a hospital to discover he succeeded in killing himself. Well, for three minutes anyway. A chance encounter with a nurse leads to Elliot injecting himself into a plan to steal millions in drugs from a hospital shipment. Will Elliot and his new found associates reap the rewards of a successful plan or will everything come crashing down around them?

Having just finished Jake Hinkson’s first novel, Hell on Church Street, I was hungry for more. Luckily for me, I didn’t have to wait. For a criminally low price, Hinkson’s follow-up The Posthumous Man is available as an e-book on the Kindle Store. Coming in at a brisk 148 pages, Hinkson takes us to a small town in Arkansas shortly before a gang of wannabe heisters steal a load of Oxy to earn a cool two million dollars. Comprised of a bankrupt businessman, a cop and his twin brother, a nurse and a man recovering from a failed suicide attempt, there’s no way the plan can fail!

In an attempt to avoid spoilers – and believe me, with the way this novel turns out, the less you know the better – I’ll leave it at that. Hinkson uses his talent for creating likable scumbag characters by throwing out this rag-tag collection of losers you can’t help but root for. Even when everything is falling apart, you’ll still pulling for a victory.

Just like with Hell on Church Street, the violence is swift and coarse. There’s no sugar coating anything here – Hinkson rips open a wound and forces you to look at it. It’s good to know that after reading crime fiction for all these years, there are still authors out there that can shock me with a certain way of writing brutality.

If you’re looking for a rapid read that’s hard to put down, look no further than Hinkson’s The Posthumous Man.
Posted by Unknown at 1:19 PM No comments: