Life in the Gulag 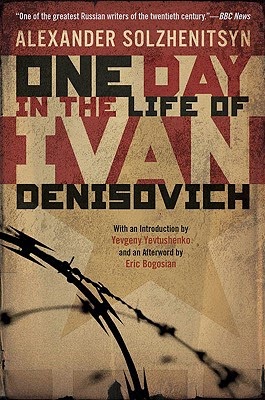 One Day in the Life of Ivan Denisovich by Alexander Solzhenitsyn
1962
Reviewed by Diane K. M.
My rating: 5 out of 5 stars

"The degree of civilization in a society can be judged by entering its prisons." -- Fyodor Dostoevsky

This book was a good way to take my mind off of my own problems. Reading about the grueling conditions of a Soviet gulag made my daily worries seem trivial.

The novel is set in Stalin's Russia of the 1950s and follows the prisoner Shukhov from the moment he wakes up at 5 a.m. to when he finally goes to bed after laboring all day. Shukhov was sentenced to 10 years of hard labor, even though he was innocent. While fighting for Russia in World War II, he was captured by the Germans. He managed to escape and return to his own lines, but then he was accused of being a spy. Faced with being shot or doing hard labor, he signed a confession to spare his life.

Shukhov has already served eight years and knows how to survive in prison. He stays out of trouble and tries to do small favors for people who can get him a little extra food each day. He is a hard worker and believes that prisoners have to help each other to stay alive. He learned this lesson from his first squad leader, who told the new inmates: "Here, men, we live by the law of the taiga. But even here people manage to live. The ones that don't make it are those who lick other men's leftovers, those who count on the doctors to pull them through, and those who squeal on their buddies."

The prisoners are forced to work in brutally cold weather and have very little food. This book makes you appreciate being warm and well-fed, to be sure. When Shukhov is refused a favor from a guard who works indoors and who sits near a heater, he wonders, "How can you expect a man who's warm to understand a man who's cold?"

In other sections, we see how important it is to eat slowly and to treasure each bite: "More than once during his life in the camps, Shukhov had recalled the way they used to eat in his village: whole pots full of potatoes, pans of oatmeal, and, in the early days, big chunks of meat. And milk enough to bust their guts. That wasn't the way to eat, he learned in camp. You had to eat with all your mind on the food -- like now, nibbling the bread bit by bit, working the crumbs up into a paste with your tongue and sucking it into your cheeks. And how good it tasted -- that soggy black bread!"

While reading "One Day," I was reminded of some other great books about work camps, such as "Escape from Camp 14," which was about a North Korean prison, and several about the Holocaust: Viktor Frankl's "Man's Search for Meaning," Elie Wiesel's "Night" and Art Spiegelman's "Maus." Each of those books has their own insights into how people survive in subhuman conditions.

I appreciated the spare, straightforward language of Solzhenitsyn. According to the introduction, Solzhenitsyn himself had served eight years in a Russian concentration camp, reportedly for making a derogatory remark about Stalin. The book was published in 1962 during Khrushchev's reign, and was considered an attack on Stalin's human rights violations. I admired Solzhenitsyn for having the courage to tell this story.
Posted by DianeLibrarian at 6:00 AM No comments:

Mike and Psmith by P.G. Wodehouse
My rating: 3 of 5 stars

When ace cricketer Mike Jackson is pulled from Wrykyn by his father for a bad report, Mike has the misfortune of being sent to Sedleigh. Fortunately for him, this is where he meets Psmith...

Some days, you just want to read about a guy wearing a monocle that calls everyone "Comrade" and generally stirs the pot.

Mike and Psmith is an early P.G. Wodehouse novel about Mike Jackson's tenure at Sedleigh and his befriending of one Rupert Eustace Psmith. The P is silent, as in Psychotic and Pteradactyl. Since it's an early Wodehouse, it feels more akin to the school stories that were popular in Britain in the early 20th century than Wodehouse's "musicals without the music" comedies later on in his career, when he was in mid-season form.

While he was clearly still finding his footing, Wodehouse still supplied some comedic gold in Mike and Psmith, chiefly in Psmith, the whole reason I nabbed this book in the first place. It was here that Wodehouse saw the potential he had in Psmith, who would later go on to overshadow Mike Jackson time and time again in Psmith, Journalist, Psmith in the City, and Leave It to Psmith.

Mike and Psmith was originally written as a serial and the book feels that way. Mike and Psmith go from one episode to another, involving secretly playing cricket, a painted dog, the Archaeology club, making enemies, etc.

The parts featuring Psmith were by far the most interesting but it's hard to look away when that monocle-wearing socialist is on stage. Psmith makes me want to call everyone Comrade and tell outrageous lies with a straight face. He's the spiritual ancestor of Wodehouse's other smooth operators like Galahad Threepwood and the Earl of Ickenham, Uncle Fred.

For historical significance and all the fine Psmithery, I'm giving it a three but it lacks some of the fun of later Wodehouse novels.

12 Questions with the Peacemaker Maker

How did you hook up with Angry Robot for Peacemaker?
My agent met Marc Gascoigne when he was in Australia for Conflux. She was really impressed by what they were publishing. We hoped that PEACEMAKER might work for them, and subbed it through the normal channels.

What would you say the big inspirations behind Peacemaker are?
I was destined to write a “Western” flavoured story at some stage. I grew up on a diet of Zane Grey, and have a deep respect for wild and hostile landscapes, having lived in the Pilbara for ten years. I would say that the setting definitely came first in this novel. Then I set about finding out who exactly would populate it. I’d written a short story a fair while back, with Virgin Jackson as the protagonist. It was a futuristic Australian outback tale with post-cyberpunk overtones. I revisited that character and knew she would be perfect in this freshly realised world. In fact, it’s kind of like she’d been waiting patiently in my files for me to come and get her.

Any more books featuring Virgin Jackson in the works?

Yes. Book two is due out next year and has a working title of DEALBREAKER. It delves deeply into the supernatural side of the story, as Virgin and Nate learn more about the Korax. The fun bit for me, will be comparing the politics of the slums and the politics of the university (a featured location) – and seeing how little they actually differ from each other. Oh, and the Gods! There’ll be mythological mayhem.

Who would you cast in a Peacemaker movie?
I’m always a fan of the unknown actor, so I’m not really sure. But maybe Chaske Spencer for Nate Sixkiller.

Who is your favorite author?
Unfair! I can’t possibly pick one. Also, my reading tastes have varied so spectacularly over the years, it’s hard to compare the kinds of writing. However, I will always have a very special place for Ballard’s Vermillion Sands collection, and Terry Dowling’s Twilight Beach collection. Both have a languid romanticism about them that really appeals to me.

What is your favorite book?
See above! I don’t think there is one favourite. At different times, particular novels have meant a lot to me. I remember being totally seduced by Carlos Castaneda’s A Separate Reality, hooked by Charles Sheffield’s Heritage Universe series  and fascinated by Vernor Vinge’s Marooned in Real Time.  Then there was the Endymion series by Dan Simmons and Chaga by Ian McDonald… I really could go on forever.

What are you reading now?
The Gods of Guilt by Michael Connelly. I’m not finding it as compelling as earlier Mickey Haller stories, but Connelly is always readable.

Is there a book that made you want to be a writer?
Books! Enid Blyton’s Secret Seven and Famous Five series, without a doubt. Empowering kids to solve mysteries - I so wanted in. Oh, and all that homemade lemonade! After that, came The Secret Garden by Frances Hodgson Burnett, followed by every Zane Grey, and then later Sons and Lovers by D. H. Lawrence.

Peacemaker isn't your first trip to the dance.  What was your first published work?
Nylon Angel back in 2004 was my first novel and my first outing in science fiction. Action, adrenalin-fuelled and raw. I still get fan mail about that series. It seemed to touch a lot of people.

Name an Australian author the rest of the world needs to know about?
Some of my favourites include Trent Jamison, Tansy Rayner Roberts, Margo Lanagan, Jo Anderton and Lucy Sussex among many, MANY others. Kylie Chan is also huge over here, and I expect will be so internationally soon. But may I refer you to the Skiffy and Fanty podcast about Australian spec fic for a comprehensive answer to that question.

What's next for Marianne de Pierres?
I’ve got a list of my upcoming projects up on my website. Firstly though, I’m writing DEALBREAKER, followed by a SF near-future thriller with the working title PHARMAKON. I also have a couple of crime novels in the pipeline and will be doing some game writing for a prototype. I love having a number of creative projects brewing.

Any advice for aspiring writers?
Finish what you start! Best advice anyone ever gave me in writing.  You can find the rest of my writing tips on my website.