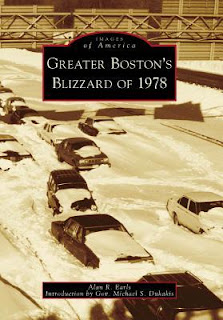 The great blizzard of 1978 is an event seared in the memory of anyone who lived through it. Most of Greater Boston was quickly overwhelmed by the storm, which shut down all forms of transit, stranded thousands of cars and motorists along Route 128, and virtually shut down most of the state for a week. But for many coastal communities, the impact of the storm, which brought record high tides and pounding surf, was pure devastation. The common thread shared by almost everyone in the region was positive memories of neighbors and strangers helping each other and finding new bonds of community. Greater Boston's Blizzard of 1978, illustrated with approximately 200 photographs from government archives and private collections, brings alive the fading experiences of February 1978 for those who were there and those who can only imagine.

This was the perfect book to read on my lunch hour after getting hammered with 12 inches of snow. Points south got considerably less, and there were lots of school cancellations, so my commute wasn’t deadly and I got to work at a reasonable hour.

Full of amazing photos showing a city buried under more than two feet of snow, cars stranded on highways, intrepid pedestrians using skis to get around the city, shovelers digging out their buried cars and houses, and the emergency workers and volunteers who provided shelter and aid.

The coastal communities north and south of Boston were hit particularly hard. Streets were flooded and property damage was extensive. Houses were battered, split in half. It was a tragedy for many people. For me, it was winter fun. School was closed for a week and it was several days before I could even leave the house.

I’m sure Governor Dukakis did all he could at the time. He declared a travel ban, which remained in effect for a week, yet thousands of drivers were stranded. Weather forecasting was not as advanced in those days and people were simply unprepared. The sad thing is that Boston is still woefully unprepared for a major storm. They do a shit job removing snow from roads and clearing sidewalks. Poor drainage causes street flooding in many areas of the city. The city is congested and there’s too much traffic. The public transportation system is old and unreliable. And Boston seems to have a difficult time controlling its rats. The zombies who hang around outside the methadone clinics in Boston should be given shovels to clear the messy sidewalks and crosswalks, and all drivers should be required to have snow tires like they are in Canada.

Where were you during the Blizzard of ’78?