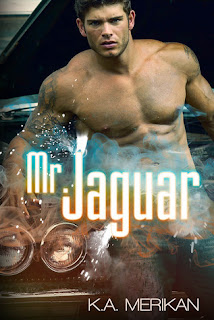 K.A. Merikan
Self-Published
Reviewed by Nancy
3 out of 5 stars


Mike Miller’s life has gone to shit. The formerly popular high school quarterback now works at a gas station in the middle of nowhere. The last thing he needs is meeting the guy he used to bully at school and seeing him all sorts of polished up. James is now the proud owner of an amazing silver Jaguar and a self-made millionaire. It seems that the day couldn’t get any worse for Mike, but James ‘Lovelace’ Austin might just turn out to be his golden ticket out of the job he hates.

When James Austin meets Mike Miller, his high school crush and tormentor all in one, working at an old, dirty gas station, it feels as if the stars have finally aligned in his favor. He wants to finally get his revenge on the guy, but when Mike turns out to be gay, the whole afternoon takes a turn for the surreal. Instead of just humiliating Mike at his workplace, James decides to hire him for a weekend at a conference he’s attending. A hot guy by his side is the only accessory James needs to rub his success in the faces of his frenemies.

Only problem is, a gay Mike Miller might be too much of a blast from the past than James ever expected. If James wants his nerdy heart safe from the hunky jock, he needs to keep Mike at arms length. The task would be a lot easier if Mike wasn’t unashamedly hitting on James. Or is it just James’s money Mike is after?

James Austin owns a Jaguar and has a very successful career. Though he makes a lot of money and lives very comfortably, he has no love life.

Mike Miller works at a shabby gas station fixing other people’s cars, but doesn’t make enough to afford his own.

When James stops in for gas and a wash, he eventually recognizes Mike was football quarterback in high school, and the guy who pushed James in a cold shower while the entire team watched.

Underneath the anger and humiliation hides unresolved lust. James learns that Mike is deeply closeted and his bullying was just an inept attempt to get James to notice him. In spite of Mike's past behavior, James finds he is now very attracted to him.

Mike badly wants out of his job and sorry life, so he accepts James’ offer of $2,000 to accompany him at a weekend conference.

For the rest of the story, both characters thoroughly annoyed me. Though I was tempted to set the story aside for something else, I gradually found myself tolerating the men’s stupid jokes, sexual innuendos, and enjoying their developing feelings. It’s no longer as simple as James flaunting his wealth and Mike obsessing about sex.

One thing that did bother me, though, was the amount of work-shaming going on in this story. Mike may have been a loser in some ways, but it’s not because he has a dead-end, poorly paying job. I was tired of reading about his bitterness and wanted him to act like a professional. Let’s face it – the economy sucks and not everyone can work at a job that pays well and suits his or her abilities and education. There is no shame in washing cars or making sandwiches. So hold your head up and show some pride in your work. Professionals exist at all levels in every field. And remember, people, it’s just a job. We are so much more than our jobs.

The characters redeem themselves in the end and I got a few laughs, so this wasn’t a bad way to kill some time.
Posted by Nancy at 1:43 PM 1 comment: