The Drowned World by J.G. Ballard
My rating: 4 of 5 stars

”The solar disc was no longer a well-defined sphere, but a wide expanding ellipse that fanned out across the eastern horizon like a colossal fire-ball, its reflection turned the dead leaden surface of the lagoon into a brilliant copper shield. By noon, less than four hours away, the water would seem to burn.”

Solar radiation has melted the polar ice caps, and the oceans have risen to engulf most of the major cities of Europe and America. These cities have become tropical lagoons with only the upper floors of the tallest building sticking up out of the water and silt. Flora and fauna baked by radiation have grown to enormous sizes reminiscent of the Triassic era.

A team of scientists have come to investigate and analyze the changes that have occurred in London since humans were forced to flee North. Some of the members of the team start to have strange, primordial dreams.

”’What are these nightmares you’ve having?’

Beatrice shrugged. ‘Jungle dreams, Robert,’ she murmured ambiguously. ‘I’m learning my ABC again. Last night was the delta jungles.’ She gave him a bleak smile, then added with a touch of malicious humour: ‘Don’t look so stern, you’ll be dreaming them too, soon.’”

Ballard explains what is happening to the scientists with a bit more detail beyond just calling them jungle dreams.

”Just as psychoanalysis reconstructs the original traumatic situation in order to release the repressed material, so we are now being plunged back into the archaeopsychic past, uncovering the ancient taboos and drives that have been dormant for epochs… Each one of us is as old as the entire biological kingdom, and our bloodstreams are tributaries of the great sea of its total memory.”

Beatrice Dahl is a beautiful woman made more lovely by the fact that she is the only female on the expedition. She has found an exquisite apartment that with the help of a generator still has air conditioning and ice. She has a sexual relationship with Dr. Robert Kerans, but she seems rather apathetic about her lover. Of course, it could be the heat.

Temperatures climb to 140 degrees by midday.

There is a Max Ernst painting on the wall of Beatrice’s apartment, and the longer they are there, the more the painting reminds Kerans of the real world. 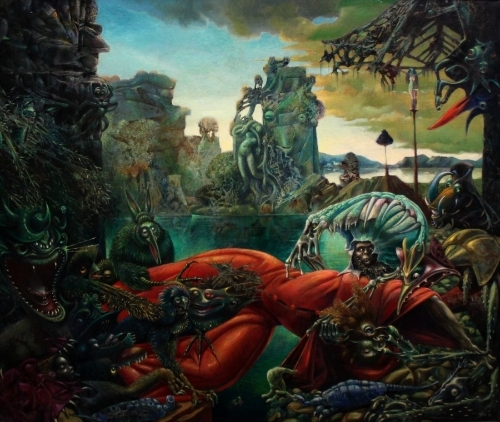 I wonder if the Max Ernst painting was something like this.

As the day approaches that they will have to leave, Robert and Beatrice become more convinced that they are going to stay. It doesn’t make any logical sense. Within a matter of months they would be out of fuel to drive the air conditioning and food would begin to be a problem, but the desire to stay and become part of their jungle dreams clutters their thoughts.

This novel has a Conradian feel, specifically one of my favorite books Heart of Darkness, so Ballard had my attention from the very first page.

I’m a fan of post-apocalyptic books, and J.G. Ballard was obsessed with the worlds that are created by the chaos of destruction. The characters in this novel go against the norm for post-apocalyptic novels. They aren’t resisting the apocalypse. They are intent on joining it. The novel becomes even stranger when some scavengers show up led by the pale, thin man aptly named Strangman.

Ballard explores the urges that are normally repressed by civilized human beings. The call of the wild is in our DNA. When we are dipped in the primordial soup of a tropical lagoon, we feel the need to escape the bondages of civilization. Something on a cellular level is telling us that we are missing the fundamental purposes of life. Kerans is intent on escaping the clutches of all that is trying to bind him and head South into the uncertainty of a new world. 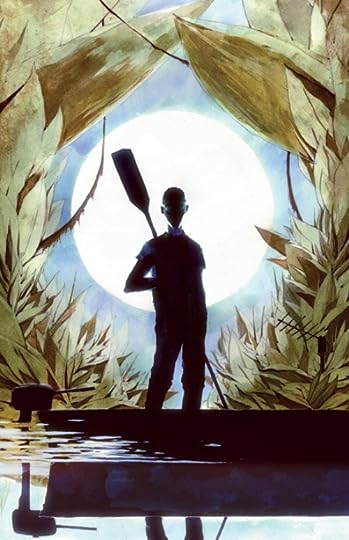 ”His commitment to the future, so far one of choice and plagued by so many doubts and hesitations, was now absolute.”

Posted by JEFFREYKEETEN at 3:49 PM No comments: