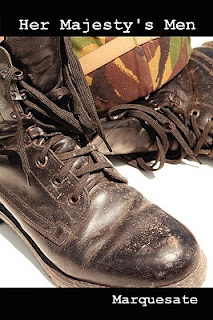 Marquesate
Camouflage Press
Reviewed by Nancy
4 out of 5 stars

Her Majesty's Men is the story of two soldiers in the British Forces and of a friendship taking unexpected turns. In the eyes of the Army they are just two mates who are close. But from the revelation of personal secrets, ensuing hatred and aggression, through terror and danger, to loyalty, triumphant strength and courage, grows their own realisation of what they are: comrades first and foremost, but something else too, something more significant. The two Royal Engineers, Sgt Tom Warren and SSgt Alex Turner, learn to understand the real meaning of loyalty and strength. Their fight for survival cuts through all the discipline and rules, to tie them together in a unique bond of companionship and trust.

This is the story of two British solders, Alex Turner and Tom Warren, who are comrades, best friends, and eventually, lovers. Though Tom is discreet about his sexuality, he trusts his friend enough to come out to him. Unfortunately, Alex reacts harshly, putting a temporary strain on their friendship. Alex's behavior sucked, Tom’s crush on Alex bordered on obsessive, and the short sentences and terse dialogue didn't appeal. The Britishisms I expected were largely absent, so Alex and Tom could have been American solders as well. I nearly set the book aside for something else, but glad I continued.

The story improved significantly later on as aspects of Alex's past are revealed and the tension ramps up when Alex and Tom are on a mission and put in life-threatening situations. I'm not a huge fan of “gay for you,” but this was well done and very believable. Alex gradually explores his own sexuality and growing feelings for Tom and becomes a much more likable character. There are a number of explicit violent scenes, but these did not feel gratuitous. They added tension, excitement and gave the guys an opportunity to display their courage, bravery and sacrifice. Their lovemaking was brutal and passionate.

I liked how the story took place over a period of years, keeping it from feeling “insta-lovey” and allowing both characters to heal from their physical and emotional wounds. It was easy to feel the men’s strong connection and deep care and respect they had for each other, which can be hard to accomplish in a short story.

The brief glimpse of the women in the men’s lives (Tom’s sister and two daughters and Alex’s ex-wife) was not an unwelcome interlude and added a touch of sweetness, but felt a little tacked on and unnecessary.

Despite the minor flaws, this was a very solid and enjoyable military romance.
Posted by Nancy at 3:03 PM No comments: