Raylan Givens Is on the Job 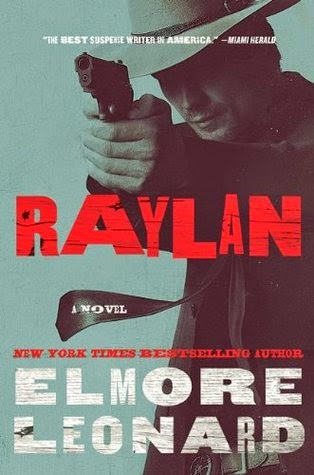 
I've long been a huge fan of the books of Elmore Leonard, and I've also really enjoyed the television series, "Justified," which is based on Leonard's excellent short story, "Fire in the Hole." Given that, I was really anxious to finally have the chance to pull Raylan off my giant stack of Books-to-Read and have at it. I'm sorry to say, though, that the book did not live up to my (perhaps exaggerated) expectations of it.

Reading the book, it felt to me like Leonard might have decided to sit down over a long weekend and sketch out a few plot ideas that the writers could then use in the TV show or, less charitably, that he might have just decided to whip out a quick book and capitalize on the popularity of the show.

While I've not read a lot of his westerns, I've read every one of Leonard's crime novels and, strange at it might seem to say, this book did not feel to me like a real Elmore Leonard novel. Most of the characters who populate the book are drawn from the television show, but they seem thin, without the usual depth of Leonard's characters. Instead of seeming genuinely quirky, the way so many of Leonard's great characters do, these characters often feel like they're straining for quirky but falling short of liftoff. And perhaps most disappointing of all, the dialogue, which has always been one of the great entertaining strengths of an EL novel, here seems labored and not nearly as sharp as usual.

The book itself involves several subplots, all taking place in Kentucky and revolving around U.S. Marshal Raylan Givens. In one, two dope-dealing Crowe brothers step up their game and hook up with a transplant nurse to steal human kidneys and sell them off. Another involves the efforts of a murderous female mining executive to clear the path for the destruction of a mountain allegedly full of coal, in spite of the environmental and human consequences of the action. In yet another, Raylan crosses paths with an attractive young college student who is attempting to make her fortune by playing high stakes poker.

Inevitably all of the women are bright and sexy and anxious to get it on with Raylan. Raylan, in turn, is quick on the draw and the body count in the book is fairly high. Upon completing the book, Leonard told the people involved with the TV show to strip out of it anything that they might like to use, and a couple of these plot lines did ultimately turn up in the show.

All of this is not to say that this is a bad book; in fact, it's a perfectly pleasant way to while away an evening, and if anyone else's name had been on the cover, one might put it down thinking it was a pretty damn good read. But when the name on the cover is Elmore Leonard, his long-time readers might have legitimately expected something a bit better. Readers who have not yet discovered Leonard's work might be better advised to begin with some of his earlier books like Get Shorty, or even Pronto, the book that first introduced Marshall Raylan Givens.
Posted by James L. Thane at 10:42 AM No comments:

Don't Point that Thing at Me by Kyril Bonfiglioli
Reviewed by Jason Koivu
My rating: 4 of 5 stars

Not only was Kyril Bonfiglioli a fan of PG Wodehouse, he flat out references Wodehouse through out Don't Point That Thing At Me. It's a level of sycophancy that I wasn't 100% comfortable with. But I guess if you're going to ape a writer's style, why not go full monty and let it all hang out? I mean, Bonfiglioli's writing style is sooo similar to Wodehouse's that it wasn't going to take the British public long to sniff it out, so hell, drop in a mention of Jeeves and Wooster into the text right off the bat and get it over with.

That said, Bonfiglioli does not quite have Wodehouse's wit and his characters are not quite as charmingly lovable as Wodehouse's. The first part is a tough one for anyone, save the odd Oscar Wildes and Mark Twains of the world. The second part is unavoidable considering Bonfiglioli is writing about characters involved in grand theft and murder. He's taken Wodehouse's stock plot - Wooster being forced into petty crime - and gone big and mean with it. Consequently it becomes hard to love or even side with his main characters. They do wrong and when wrong is done to them the best I could muster was an, "oh well mate, you had it coming" kind of sympathy. However, like James Bond - who kills a chap or two before he's even had his kippers - there is a certain amount of acceptance for all the wrong doing. This is entertainment. This is comedy. Since these aren't real people getting bumped off we can remain lighthearted and aloof, and so the characters we're supposed to be rooting for aren't completely tarnished.

Humor, man, it's so violent!

Adventure During The French Revolution

In the Reign of Terror: The Adventures of a Westminster Boy by G.A. Henty
Reviewed by Jason Koivu
My rating: 3 of 5 stars

The bloody guillotine...The slaughter of fatted nobles...The bloodlust massacre of innocents. G.A. Henty gives us the sour taste of these images from the French Revolution in his adventure story, In the Reign of Terror.

The tale follows Harry Sandwith, an English youth on the cusp of adulthood, as he tries to find a place in life for himself in France in the late 18th century. While there, the rumors of populous unrest explodes into the most unimaginable of horrors. Henty places his hero in the very center of history, even rubbing elbows with Revolutionary icons such as Robespierre. Where the politics of the times are concerned, the novel takes a decidedly antagonistic view of the Revolution. The plight of the people is not ignored, however, the acts of violence against the noble class are to be abhorred, if the novel's tone is the measuring stick to go by.

Adventure novels rely upon action to draw in the readers. Here the action comes in spurts and leaves much to be desired. Modern readers, accustomed to the pulse-racing nonstop action of today's highly-polished books and movies, may be frustrated by Henty's style. Too many static scenes drag on, too many words are wasted in describing plans instead of just enacting them, and too many insignificant actions are pondered upon. Once I even scared myself into thinking I'd accidentally started reading a James Fenimore Cooper!

The dialogue has issues too. A good deal of almost absurdly detailed exposition is delivered via dialogue, stilting it unnaturally. Emotional and psychological character transformations come at the flip of a switch: I see you are right and I am wrong. I will adjust my values. There, I have adjusted my values.

But before I finish, I don't want you to walk away from this review thinking poorly of this book. No, I actually enjoyed it for the most part, and if you can forgive the writing style, this less than perfect novel can be a fun read.