Man Drowning by Henry Kuttner
My rating: 5 of 5 stars

”Everything around was bleached dun, the color of a cow skull I’d seen stuck on a pole that morning on the road in, but there were shadings, from blinding, scalding, dry white to tawny earth, that had all the vigor sucked out of it ages ago by the Arizona sun. Everything was the color of something burned, even the black rope, which had the color of oily cinders. It moved itself from left to right across the woman’s throat with a slow disgusting motion. She put up a claw of a hand and rubbed its head with a finger that had skin coarser than the snake’s. I heard a dry scratching. The snake quieted. It hung there. Once its tongue flickered out. It was still.” 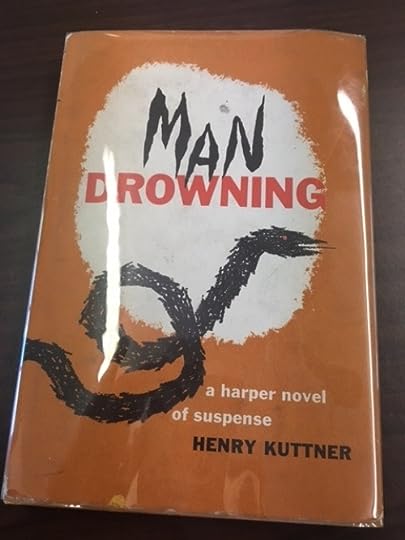 I’m very fortunate to have a 1st edition squirreled away in my library.

Nick Banning hits Phoenix with maybe two red hot dimes to rub together in his pocket. He can say he is just passing through, but what he is really in town for is to see his ex-wife, Sherry. She is making time with the owner of the club she sings in. When he hears the news, it is like someone jammed a railroad spike deep into his brain and impaled every good memory he ever had.

She was supposed to wait for him to get his shit together.

The problem is Sherry has done her time. The violence that is coiled like bands of barb wire around Nick’s muscles is always on the verge of unleashing. His razor lashed soul is leaking drops of insanity into his bloodstream. His anger is always so close to the surface it is amazing that he doesn’t glow like a lightning bug.

”’What are you really doing in Phoenix, Nick?’ She asked, without looking up.

‘Is that the way you want to play it?’

‘I thought I was stopped. Till I saw you again.’

‘Then you’d better stop seeing me.’

I didn’t move. I watched the shiny black table and Sherry’s face, upside down.

She pushed the ash tray forward so that it covered the reflection.”

Nick takes a job with the De Anza’s, the Count and Countess. The Countess is like something long dead that has crawled out of a mummy’s tomb, with her bony skull and her red rimmed eyes. She is bored, bored, bored, and needs a constant source of entertainment. She plays the roulette wheel like she is playing with house money. She likes to hang a Kingsnake around her neck, snake scales slithering over human scales. *Shudder* She is loose with money in a way that people are who didn’t have to earn it. Her husband, the Count, can’t decide if he is sick of life or just already dead inside. He lays in bed with white paste on his face and dark sunglasses over his eyes. They deserve each other, but each is scheming to get away from the other.

Nick watches the Countess put $7,000 in cash in the floor safe.

The puzzling thing for Nick is always... did I do it or did I just dream it?

”Something made me look down. There on the seat beside me was the gun. Two of us together, the gun and I.

The car roared past the highway sign and the side road and kept on straight ahead. I knew where we are going. We were going to Sherry.”

This is hardboiled with a capital H. This is such a great example of the genre. I’m simply shocked that I am the first person on Goodreads to write a full review of this book. I won’t be the last. Centipede Press is putting out a limited edition of this book in the near future, which will hopefully create more interest in this lost classic of the genre. The De Anza’s are so bleeping creepy and crazy. Banning is a homemade bomb with a lit fuse and no timer. By putting these three people together, there is no chance that something horrible isn’t going to happen. The question is how high is the body count going to be? 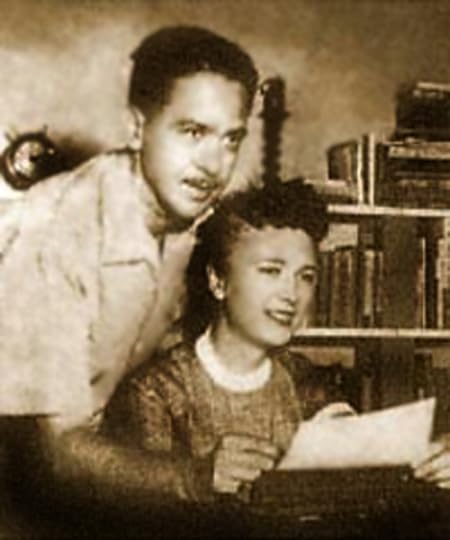 The husband and wife team of Kuttner and Moore.

Interestingly enough, there are rumors in the trade that Cleve Cartmill actually ghost wrote this book to be published under Henry Kuttner’s name. I’m not an expert on Kuttner, but from what I’ve read about this book, it has Kuttner’s fingerprints all over it. Maybe Cartmill wrote the bulk of it, and Kuttner put the polish on it. Kuttner had a John Lennon/Paul McCartney type relationship with his wife, C. L. Moore. They collaborated on nearly every story they wrote, regardless of whose name it was published under. One would write and leave the typewriter, sometimes in the middle of a sentence, and then the other would step in and continue the story. It was a borg alliance of married writers.

Unfortunately the relationship was short lived; Henry Kuttner died from a heart attack at age 42.

If you like hardboiled noir, you have to read this one.

Posted by JEFFREYKEETEN at 3:03 PM No comments: