Out of Mao's Shadow: The Struggle for the Soul of a New China by Philip P. Pan
Reviewed by Jason Koivu
My rating: 4 of 5 stars

I thought China got it's shit together after Mao's death. Apparently I was wrong.

Out of Mao's Shadow by Philip Pan is yet another book notched in my ongoing self-education of that huge honkin' thing known as China. I've got two reasons for my interest.

One, China is a world player now. When I was a kid, China was the overpopulated country that produced cheap plastic goods, and that was essentially it. Now China is stretching out and opening up. They are interacting with the rest of the world. On the one hand that's exciting and on the other hand - the uniformed and superstitious hand - it's a little scary. Why? Back when I was that aforementioned kid, China was staunchly Communist and buddies with our archenemy the USSR. In the '80s, if there was one thing our elders/leaders in America wanted us to know, it was "Communism...BAD!!!" End of story. That's all you needed to know. But since then I've grown up and China has matured as well. I felt like it was time we bury the past, shake hands and get to know one another.

The second reason for my recent interest and studies of all things China is that my brother has been over there working as a teacher for a few years now. The Chinese are rabid to learn English these days it seems, so my bro is over there saying shit and explaining himself, mostly to kids, who are utterly fascinated by the pasty-faced whitie. This has led to a desire to know a little more about what he's experiencing.

So I've read history books on China's past (and wow-e-wow they've got a past AND some to spare!). I learned about Mao's Cultural Revolution. Now it was time to get with the times, so I turned to Out of Mao's Shadow, a collection of journalistic stories about the people crushed by and fighting back against the authoritarian, one party system that has ruled China since the Chairman's death.

This book dashed my misconception that today's China was burgeoning utopia for capitalism, free speech and democracy, the facade their government has cultivated for the last few decades. Some Chinese want these things, the others will hold on to power at all costs. China leadership likes prosperity, but they also covet ultimate and total control. New ideologies blend with old tactics and human rights become the doormat on the way to profit.

Story after heartbreaking story, Pan details the constant clash between the people and the people who rule them. It's a war made more complex by China's tumultuous past and the back and forth clashes of the Cultural Revolution that sometimes pitted friend vs friend, even parent vs child. Aging generations, jerked around and left confused, are pensively mixing with youth, if they're not too afraid to get burnt once more, and so the country is filled with an amoebic populous unsure of itself, its place and its future. I can only hope for the best.


View all my reviews
Posted by Jason Koivu at 1:22 PM No comments: 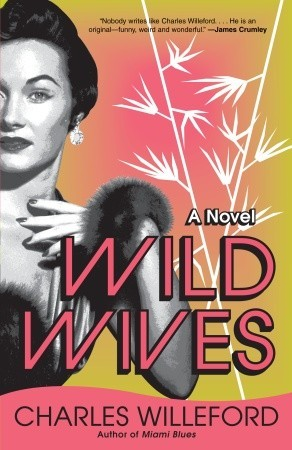 First published in 1956, Wild Wives is a short but very entertaining novel from Charles Willeford, the author of Miami Blues and a number of other crime novels.

Jake Blake is a struggling San Francisco P.I. who lives in the same cheap hotel where he has his office. One slow afternoon, Florence Weintraub, the inevitable Hot Babe essential to the beginning of practically any classic P.I. story, waltzes into his office insisting that she's desperately in need of his help. Even though she's twenty-six years old, her father allows her absolutely no freedom whatsoever and has her accompanied wherever she goes by two goons who are allegedly there to protect her. She'd just like a couple of hours to herself, she says. Could Jake possibly help her lose the two thugs?

Well, of course he can, for twenty-five bucks a day plus expenses. And when the lovely Florence agrees to the terms, one thing inevitably leads to another. Florence is very attracted to Jake and once they finally elude her guardians, they go out to dinner, which Jake naturally adds to the expense account. Other more interesting activities accompany the dinner, and Florence insists that she'd like to see Jake again the following day.

Complications ensue and poor Jake soon finds himself entangled in a mess he never envisioned when he accepted Florence's seemingly simple assignment. It's an engaging story with plenty of Willeford's deadpan humor and enough action to propel the story forward at a fairly rapid clip. While not quite on a par with some of Willeford's better known books, it's still a fun read and will appeal especially to those who have read and enjoyed the author's other work.
Posted by James L. Thane at 10:48 AM No comments: