King Harald's Saga by Snorri Sturluson
My rating: 4 of 5 stars

”The year 1066 was a convulsive and fateful year for the destiny of England and western Europe. It was the year that brought together in violent and mortal conflict the three greatest military leaders in Europe of their day---Harald of Norway, Harold of England, and William of Normandy; three powerful and ambitious men who had fought their way to authority in their respective countries and who now, in three weeks of terrible bloodshed in the autumn of 1066, were to fight to the death for the greatest prize of all: the throne of England.” 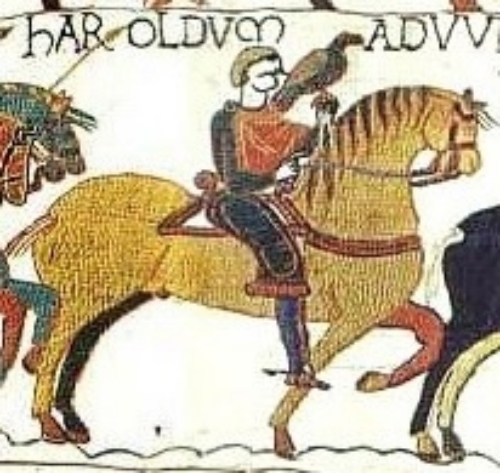 Harold II, a detail from the Bayeux Tapestry.

As fascinating as those men of destiny are, the Icelandic writer of this tale, Snorri Sturluson, proves almost as fascinating.

”He was a man of astonishing contradictions: a man who fought and schemed all his life to become the most powerful chieftain in Iceland, yet who still found time to write some of the greatest masterpieces in Icelandic literature; a greedy, covetous man who was nonetheless capable of great generosity; a patriot so fascinated by the royal court of Norway that he could harbour secret thoughts of treason; a farmer who wanted to be an aristocrat, a prose-writer who wanted to be a poet, a scholar who cared more about owning property; a worldly, cultivated man who loved all the good things of life---wealth, women, wine, good company---yet who died a squalid, tragic death in the cellar of his own home.”

Those he had opposed send men with swords to his house, and five of them trap him in his cellar and run him through and through again. A loss to literature for sure, but in some ways a fitting end for a man who wrote about so many other great men of Norwegian history meeting a similar end at the point of sword or by the swoop of a battle axe. Snorri might have become so ensnared in his stories that he fell right in the middle of them. 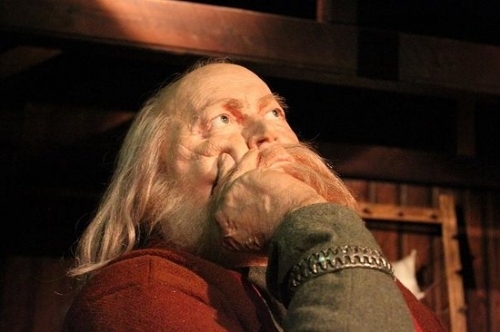 This saga is of Harald Sigurdsson and his quest for power. He fights the Danes on numerous occasions. He thinks he has as much right to the Danish throne as he does to the one in Norway.

"Svein and Harald battled
The two great war-leaders,
Shieldless, shunning armour,
Called for thrust and parry;
Armies were locked in battle,
Stones and arrows were flying,
Sword-blades were dyed crimson;
All around, doomed warriors
Fell before the onslaught.”

He fights his own people.

”Einer of the flailing sword
Will drive me from this country
Unless I first persuade him
To kiss my thin-lipped axe.”

He battles omens and creatures insidious.

”The ogress flaunts her crimson
Shield as battle approaches;
The troll-woman sees clearly
The doom awaiting Harald.
With greedy mouth she rends
The flesh of fallen warriors;
WIth frenzied hand she stains
The wolf’s jaws crimson---
Wolf’s jaws red with blood.”

I’m a modern man, and I’ve got to say reading about this hideous creature raises the hair on the back of my neck and sends shivers down my spine, enough to curl my toes. 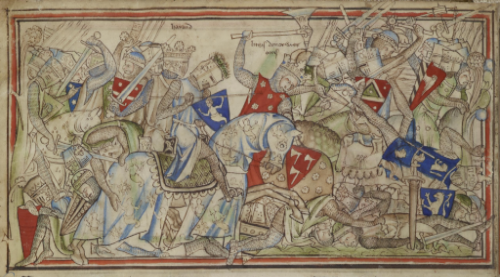 The Battle of Stamford Bridge

This of course all leads up to the famous battle at Stamford Bridge in England. Sensing an opportunity to take the throne of England, Harald of Norway decides to invade in that year of English invasions, 1066. Harald Godwinsson, or Harold II if you are English, has barely warmed the seat of his newly acquired throne when he has to lead an army into battle against those burly, bloodthirsty Northmen.”The closer the army came, the greater it grew, and their glittering weapons sparkled like a field of broken ice.”

The interesting thing about all of this is that most of us don’t know who Harald Sigurdsson is, but one could speculate if he had decided to delay his invasion by a few weeks, we may have known him as Harold the Conqueror, King of England. As it is, Harold II dispatches Harald and his army in a bloody battle that weakens the forces of Harold II. The English army then has to turn around in 19 days and fight William of Normandy at the Battle of Hastings.

William of Normandy raising his helmet to show his troops he is still alive. Bayeux Tapestry.

What are the chances that King Harald of Norway and William of Normandy would decide to invade England in the same month?

I can remember, when I was about 12 years old, riding in the pickup with my Grandpa Harold Ives and mentioning to him that he was named after an English King. He looked at me like I had rocks rattling around in my head instead of little gray cells. Even if I couldn’t convince him, I knew it was true.

Needless to say, I will be reading and reviewing more Icelandic sagas in the very near future. In a time when few were educated, the Icelandic people considered knowledge essential to life. If they had not believed so, many of these sagas would have never made the transition from oral history to written history. ”The Icelanders...take great pleasure in learning and recording the history of all peoples, and they consider it just as meritorious to describe the exploits of others as to perform them themselves.”

Posted by JEFFREYKEETEN at 7:54 AM No comments:

In the wake of 9/11, Captain America is forced into action as terrorists strike at an American town. 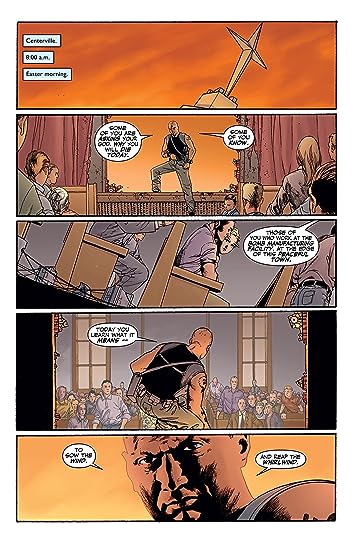 Cap is once more reminded of the tragedy of war. 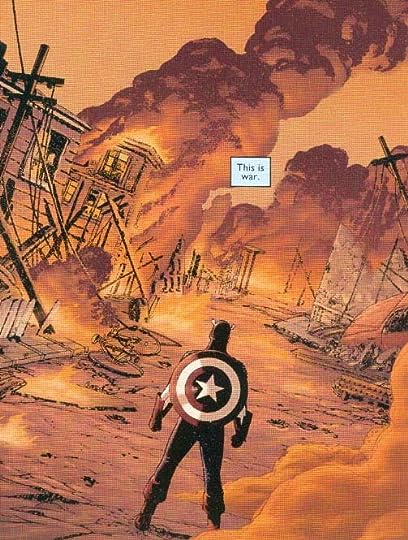 The New Deal is quite the introspective piece looking at the cause of 9/11 and whether America is as innocent as Americans believe. The world has monsters and killers, but is the US the cause of them? 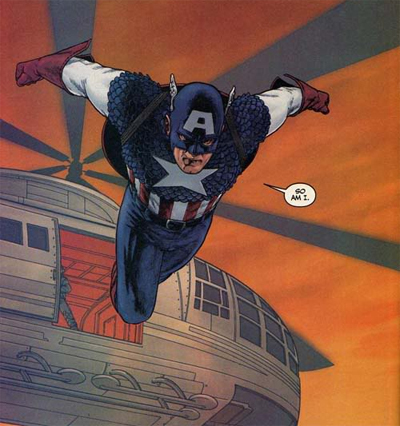 A few of the quotes in this volume are the type that keep me up at night when I think about them too long.

"Are we only hated because we're free -- Free and prosperous and good? Or does the light we see cast shadows we don't -- Where monsters...can plant the seeds of hate?"

"History repeats itself. Like a machine gun. A madman lights the spark -- And the people pay the price."

To me The New Deal is what Captain America is all about. He's the heart, the fight, the idealism, and the aspiration of America and Americans. It's funny when I was younger I didn't appreciate Captain America, but ever since his films in the Marvel Cinematic Universe I have a totally different perspective on him. Cap is simply an incredible character and this volume is a good reminder as well as a palate cleanser from the horrible Hydra Cap crap Marvel recently put out.

The New Deal is a strong beginning to a powerfully thoughtful Captain America series.