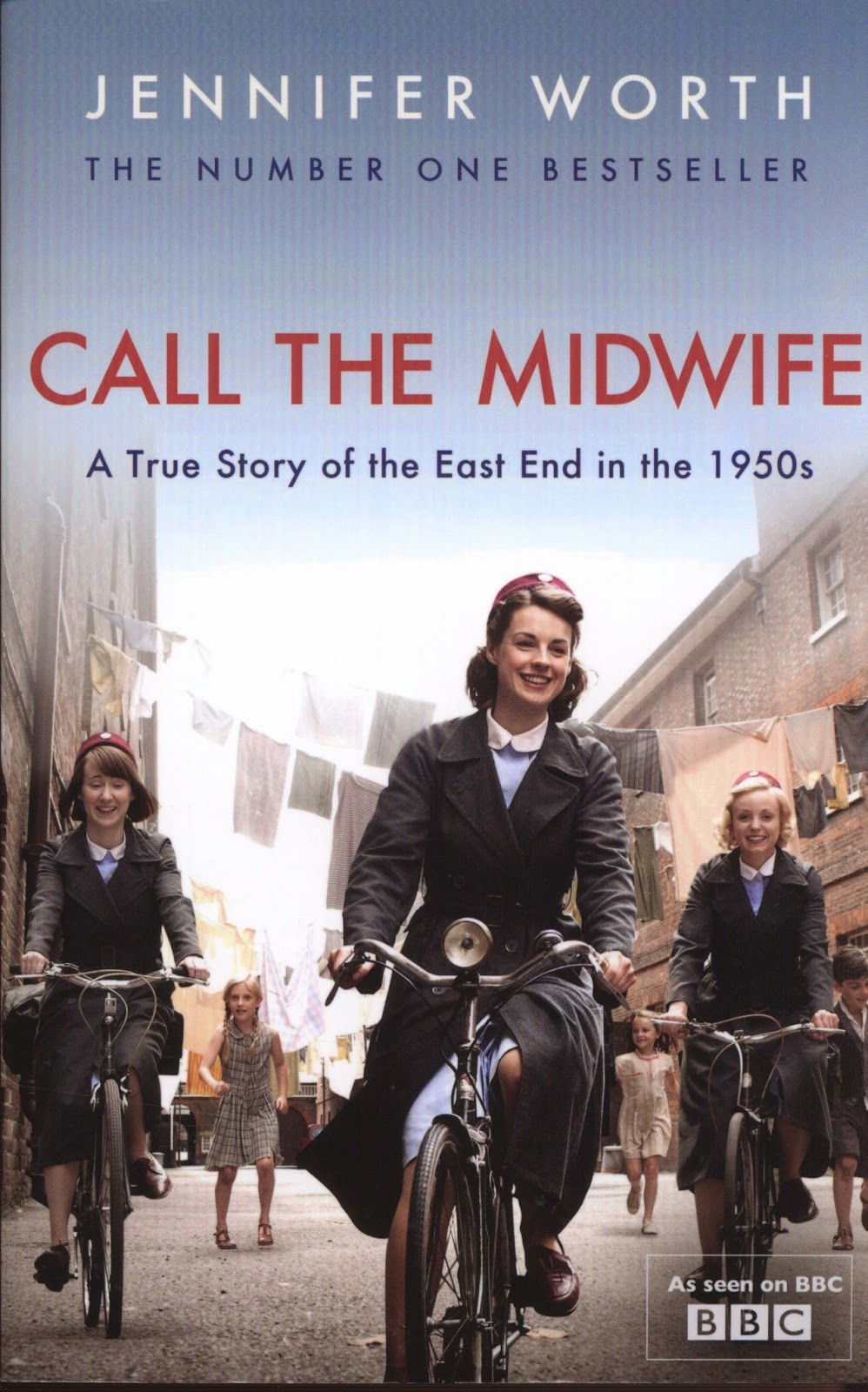 Call the Midwife by Jennifer Worth
2002
Reviewed by Diane K.M.
My rating: 4 out of 5 stars


I was surprised by how much I enjoyed this book. I liked the setting -- 1950s London -- but I had been wary of reading 300-plus pages about pregnancies and birthing and midwifery. In movies and TV shows, for instance, I hatehatehate childbirth scenes. It's always the same: The mother cries out in pain, the father looks anxious, the doctor sternly gives orders, and then presto! A sweet and wrinkled baby is handed to the parents.*

But "Call the Midwife" (which is also the name of the 2012 BBC series based on the books; the original title was just "The Midwife") was thankfully more than just a collection of childbirth stories. I ended up loving the social history of that postwar period. Jennifer Worth moved into a convent and became a midwife in the slums of London's East End, and she had good stories about the women she met and the trials of daily life for the lower classes.

"I regret that I have not been able to get to know the men of the East End. But it is quite impossible. I belong to the women's world, to the taboo subject of childbirth. The men are polite and respectful to us midwives, but completely withdrawn from any familiarity, let alone friendship. There is a total divide between what is called men's work and women's work. So, like Jane Austen, who in her writing never recorded a conversation between two men alone, because as a woman she could not know what exclusively male conversation would be like, I cannot record much about the men of Poplar, beyond superficial observation."

There was a particularly fascinating (and disturbing) section on prostitution in the area, which Worth had to deal with when she befriended a young girl who had been lured into a brothel. Worth also mentions the horrible workhouses in London, which she learned about while caring for a traumatized patient who had lived there for decades. When Worth asked an older nun about the workhouses, she was told: "Humph. You young girls know nothing of recent history. You've had it too easy, that's your trouble." I think Worth's later memoirs talk more about this, so I expect to hear many more horror stories.

It was especially interesting to see the discussion on how much England's National Health Service changed health care for the people. Worth frequently comments that certain medical procedures had previously not been available or affordable to the lower classes.

Besides the rich history, there were also amusing stories of Worth's fellow nurses and nuns. One of my favorite characters was nicknamed Chummy (played by the hilarious Miranda Hart on the BBC series) and whenever she was involved a story, I couldn't help but smile at her earnestness, which usually manifested itself in clumsiness. There was also a deliciously batty old nun named Sister Monica Joan who says things like: "Mars and Venus are in alignment... The static forces, the convergence of the fluid with the solid, the descent of the hexagon as it passes through the ether. This is a unique time to be alive. So exciting. The little angels clap their wings."

I listened to this on audio, narrated by Nicola Barber, and it was excellent. She does fantastic voices and accents, and I plan to listen to her read the other two books in the series.

*Worth wrote a passage about babies that has stayed with me weeks after I first read it: "The helplessness of the newborn human infant has always made an impression on me. All other mammals have a certain amount of autonomy at birth. Many animals, within an hour or two of birth, are up on their feet and running. Others, at the very least, can find the nipple and suck. But the human baby can't even do that. If the nipple or teat is not actually placed in the baby's mouth and sucking encouraged, the baby would die of starvation. I have a theory that all human babies are born prematurely. Given the human life span -- three score years and ten -- to be comparable with other animals of similar longevity, human gestation should be about two years. But the human head is so big by the age of two that no woman could deliver it. So our babies are born prematurely, in a state of utter helplessness."
Posted by DianeLibrarian at 6:00 AM No comments:

Six Guns of Madness by Nigel G. Mitchell
My rating: 3 of 5 stars

The Darke Boys are after the Muertonomicon, the only thing that can summon Quiluru, tentacled god from beyond the stars, from his eternal slumber. The only things standing between the town of Blackwood and utter annihilation are three gunfighters: Dylan Blaine, Ethan Tombstone, and The Kid.

Six Guns of Madness is everything the title implies: gunfighters against Lovecraftian horrors. Doctor Darke has harnessed the unholy alien technology of Quiluru and his Darke Boys are running amock on gross froggy-horsey-tentacley things, packing heat rays and bulletproof armor. The good guys have six shooters and an eccentric inventor on their side.

This is a really slim story so I can't divulge more of the plot. It's packed with all the goodies you'd expect in such a tale: gunfights, non-Euclidean geometry, and tentacles. It was really light on character development and most of the characters were stereotypes but you kind of expect that in a one shot short story. Quiluru was Cthulhu with a lick of paint but I understand why the author would want to go his own way with things. All things considered, it was a worthwhile short story to read.

This weird western was a tastey little morsel and free on the Kindle when I nabbed it. Three out of five stars.

The End of Everything

The End of Everything by Megan Abbott
My rating: 4 of 5 stars

Teenage neighbors Lizzie and Evie are thick as thieves. When Evie disappears, Lizzie's world is shaken to its foundations. Who was driving the maroon car Lizzie saw circling the block when Evie was abducted and does he have a connection to Evie's disappearance? And will Evie be found alive?

I initally discovered Megan Abbott through her noir works like Queenpin, after hearing people mentioning her in the same breath as Christa Faust. While her latest books haven't been noir, she sure paints a dark picture of what life as a teenage girl is like.

The End of Everything is about what happens to a child's family after the child is abducted. The Ververs and their friends and neighbors cope in different ways. Mrs. Verver hits the pills. Dusty Verver, Evie's sister, gets even bitchier than normal. And Mr. Verver leans on Lizzie, the neighbor girl who happens to be Evie's best friend. And Lizzie takes it upon herself to unravel what happened.

Even in the suburbs, evil is afoot, something Lizzie gradually pieces together. She makes some questionable choices but I can't imagine things going a different way if I were in her place. Her dealing with Evie's disappearance makes The End of Everything something of a coming of age tale. The entire cast gets tossed into the crucible and not a one comes out unscathed.

This book reads like one of those cheesy Lifetime made for TV movies, only deadly serious and written by the literary offspring of S.E. Hinton and Richard Stark. To paraphrase something I've said before, I'd rather be an expendable partner in a Parker caper than be a teenage girl in one of Megan Abbott's novels.

There's not a whole lot more I can tell without spoiling any of the details. Things went down about the way I thought they would but that didn't make things any less chilling. If there's one thing I took from this novel, it's that I do not want to father girls. If you have a male child, you only have to worry about one penis. If you have a girl, you have to worry about all of them.

Four out of five stars. The Megster ran wild on me again this time.