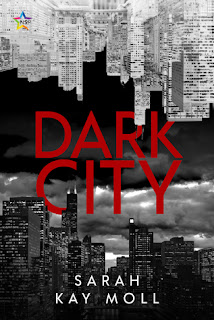 Jude has a tender heart. Yet he was born into a criminal empire and groomed from childhood to step into his father’s violent footsteps. To survive, he created a second personality. Ras is everything Jude isn’t—cruel, remorseless, and utterly without fear, as incapable of love as Jude is of malice.

But when Ras meets a ruthless socialite, he begins to feel a strange stirring of emotion, a brush of Jude’s passion against his own dark heart. Meanwhile, Jude finds himself with a knife in his hand, the evil in Ras’s soul bleeding into his own.

As the walls between them crumble, they could lose everything—their lovers, their family, and their hold on the dark city itself.

Coming together could break them…or make them whole.

Sarah Kay Moll is a new author and I’m really glad I took a chance on her first novel. The enticing cover suits this stylish and romantic crime story perfectly.

Dark City is dark, as a story about the Russian mafia should be. Jude, the youngest son of a powerful crime boss, is a gentle and sensitive soul. In order to cope with the violence in his world and fulfill his father’s expectations, he creates Ras, a second personality who can perform those brutal deeds the gentle Jude cannot.

I liked the structure of this story. It jumps back and forth between Jude’s complicated relationships with his family, particularly with his father and older brother, his childhood and the incidents that led to the fracturing of his mind, Ras’ work with the syndicate, and their two loves – the ruthless and ambitious Scarlet who has a great deal in common with Ras, and Ash, the kind-hearted prostitute and drug-addict Jude wants to take care of.

There is a vibrant cast of characters, many of them damaged and unlikeable, but certainly not one-dimensional. The beautiful and vivid descriptions of Jude’s city bring it to life in such a way that it also feels like a character in the story.

Dark City kept my attention from beginning to end. It is a character-driven story that explores Jude’s conflicting feelings about his abusive father, who in his own way loves Jude and wants the best for him, and the rivalry between his older brother, Eli.

If I say any more, I’m afraid I’ll go into spoiler territory, so I’ll stop here. Can Jude/Ras be whole again? Can mafia bad boys have a happy ending? You’ll have to read it and see for yourself.

Though this is an imperfect story, it is a brilliant first effort. I’m honestly surprised at the negative reviews, though I attribute that more to what readers expect from a certain genre rather than the quality of the story. Dark City may be too dark for those looking for a romance and is too sweet for those looking for a crime novel. For those looking for something a little different, you can't go wrong. I am confident that Sarah Kay Moll’s next novel will be a winner.
Posted by Nancy at 7:32 PM No comments: