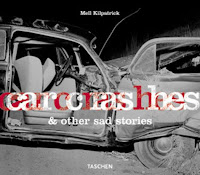 
An incredible and utterly unique historical document. This book contains selections from the photographic collection of one Mell Kilpatrick, a news photographer from South California who relentlessly pursued his profession during the 40s and 50s, capturing images from the plentiful crime scenes and in particular automobile collisions that came his way. Kilpatrick was an obsessive witness to the effects of the post-war explosion of car culture in California, and through his lens he repeatedly viewed the fatal consequences of speed. technology and reckless abandon. His work might have remained lost and unknown, sealed away in his locked darkroom, untouched since his death in 1961, if it hadn't been brought to light by collector and dealer Jennifer Dumas, who found the 5,000 negatives and realised she'd stumbled upon something very special. Although he covered other 'stories' apart from crashes, including shots of everyday life in the small towns he visited, it is the roadside images that dominate the collection. They are an unsparing archive of human tragedy. Picture after picture unveils yet another tableau of disaster with infinite variations -- the fragile shells of cars collapsed and upended, corpses hidden or fully revealed, stoic cops and laughing bystanders dealing in different ways with the reality of sudden death. It is this combination of the banal or ordinary and the appalling horror of the moment of impact that makes Kilpatrick's work a fascinating experience.


While this disturbing and unpleasant book is far from my favorite Taschen books, I can’t give it less than 4 stars. The black and white photographs are mostly of car crashes that occurred in southern California in the 1940’s and 1950’s. While some photos just show the demolished car, others show the twisted, lifeless bodies that will never again enjoy a car ride. The other sad stories referred to in the book’s title are murders, suicides and pedestrian deaths.

It’s a truly gruesome find, yet there is an artistic, evocative quality to many of the photos. Mell Kilpatrick started his career in 1948, photographing evidence for insurance companies, as well as car accidents and crime scenes.

One of my favorite photos in this collection is of a young man with a bloodied face and wrapped in a blanket sitting by his totaled car while what appears to be his parents are standing on either side looking down at him with stern expressions. Mom’s hands are akimbo and dad’s are in his pockets. Behind the car, there is a police officer and curious onlookers.

When I was no longer able to look at the corpses, I focused on the other details in the photos – the car wrecks, the empty beer cans strewn in the back seat, the laughing teenagers, the shocking lack of safety features in cars.

I would have liked more details about the photos other than street names. Maybe knowing the names and ages of the victims would be too much, but I’m kind of morbid like that.

Even though lap and shoulder safety belts were around in the late 60’s and early 70’s, I was never forced to wear them as a child and my mom always refused to wear them for fear of wrinkling her clothes. My brother and I loved the freedom of sliding side to side in the bench seats. It was easy to crawl around on the floor, open the windows, or even snuggle up next to the rear window. Little did we know we were riding in a death trap.

This is definitely not for the squeamish, and certainly not a book I’d leave laying around for my guests to look at.
Posted by Nancy at 7:04 PM No comments: