An Entertaining Romp from Tom Kakonis 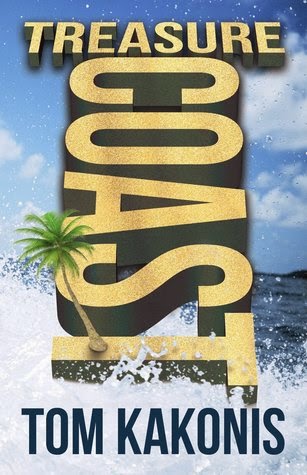 In the late 1980s and early '90s, Tom Kakonis established himself as a writer who created very good plots but who was especially gifted at populating each of his books with a cast of eccentric, interesting characters and then setting them into motion with sometimes truly inspired results. Now twenty years later, he returns with Treasure Coast, a book which clearly demonstrates that he hasn't lost a step in his time away.

The book is set on Florida's Treasure Coast, basically the Palm Beach area along the Atlantic. It opens as Jim Merriman, a compulsive gambler whose luck has turned so bad that he's now barely eking out a living as a bookstore clerk, travels cross country to visit his sister who is near death. Jim and his sister have not been particularly close for years, but as she expires she makes him promise to watch after her son, Leon.

Leon is twenty-one but appears to be much younger. His mother has left him $25,000, and so Merriman figures that the kid should be in pretty good shape, at least until Leon reluctantly confesses that he owes $45,000 to a loan shark. The debt is long overdue and even as Leon outlines his problem, two particularly nasty enforcers are on their way to collect. It was Uncle Jim who taught the kid how to gamble in the first place and that, along with the promise he made to Leon's mom, persuades Jim that he can't abandon his nephew in this time of crisis.

On the brighter side, while sneaking a cigarette outside the medical center, Jim encounters the very beautiful and sexy Billie Swett. Like Jim, Billie hails from the Dakotas and has had an "interesting" past, culminating in a job where she gave manicures at a place called Get Nailed. There she fortunately met a client named Lonnie Swett. Lonnie is an older, gross, pig of a man, but he's also enormously wealthy and when he offers make Billie the fifth Mrs. Swett, she readily agrees to swap her nail files for a huge diamond wedding set. Jim and Billie are clearly attracted to each other, though, and probably no good will come of that.

Kakonis adds to the cast a "preacher" with a mail order degree who, with a young female assistant, is selling mail order tombstones and helping bereaved and gullible rubes send and receive messages to and from their loved ones in the Great Beyond. Kakonis then turns all of these people loose in pursuit of their various objectives, most of which involve a quick score of one sort or another. As all of their paths intersect, the plot becomes increasingly roiled but Kakonis has a great deal of fun with these characters, and so does the reader.

The characters are all very well defined, and, with perhaps one exception, each is sympathetic in his or her own way. The story is very engaging and often hilariously funny. As another Michigan writer, Kakonis has often been favorably compared to Elmore Leonard and, on the strength of his earlier series featuring Timothy Waverly, I thought it was a very fair comparison. With Treasure Coast, Kakonis demonstrates that he clearly deserves to be considered in the same league as Leonard, certainly in the quality of his output if not in the quantity. Set in Florida, Treasure Coast also evokes comparisons to Carl Hiaasen, and fans of either author are sure to enjoy this book very much.
Posted by James L. Thane at 9:27 AM No comments:

Reading Jorge Luis Borges's Collected Fictions is like being thrown into the ring with a merciless prize fighter, getting the shit kicked out of you, and loving every minute of it.

These pieces felt more like punches than short stories. Borges jabs to your head, jarring your brain with damning conversations with his future self, invented libraries of the Universe and stories that make you feel like a lost kid on your way to Algebra class but accidentally ending up in Trigonometry. Then he switches his stance and digs at your body with primal blows. Petty gangsters, simplistic machismo, knife fights, all with such savage bravado that you can taste the cheap liquor and cheaper blood.

I said at the top, "loving every minute of it" and perhaps that needs to be tempered. There were times, in certain stories, where my head spun and I wanted to drop to the canvas and not get up. It seemed to be all too much. But I knew if I stayed on my feet and in the ring for the whole 12 rounds I would be rewarded richly. I was. Get in the ring and you will be too.

A Less Than Heavenly Hemingway

The Garden of Eden by Ernest Hemingway
Reviewed by Jason Koivu
My rating: 2 of 5 stars

Hemingway knows how to draw up a batshit crazy lady...but to be honest, I'm not even sure this is a genuine Ernest Hemingway novel. It might be a forgery. But we'll get to that later.

The Garden of Eden puts a newlywed couple's relationship under the microscope. David and Catherine are honeymooning in the Mediterranean. David is a writer. Catherine is a crazy bitch. David needs a security, time to write and support in his pursuits. Catherine needs occupation. She has too much time on her hands to allow her off-kilter mind to wander where it will, and it wanders down strange, dark and spiteful paths.

The Eden aspect comes in when Catherine can't leave well-enough alone. (David even nicknames her "Devil" least the metaphor should go over your head.) Everything was fine, yet she had to tamper with the creation of man and woman, what that means, who holds what role and then reversing it.

Hemingway has been criticized for his use of repetitious dialogue, but here it works well to create an aura of crazy. Catherine repeats her insane pleas, her cloying begging, her bizarre demands, and it drives you nuts. So, well done! Hemingway has also been criticized for, well, just being boring. He writes about people doing virtually nothing. As they say, write what you know, and after a while Hemingway did nothing but write, lounge about, eat and drink. So that's what he writes about and honestly, I don't need to know what kind of drink you had, because buddy, you drink inconsequentially ALL the time.

The posthumously released The Garden of Eden reads like a repeat. He worked on it about 20 years later, but it feels so very much like The Sun Also Rises that one wonders why Hemingway would write the same novel over again and try to pass it off as something new. Well, maybe he'd run out of ideas.

Where it diverges is in the sheer nakedness with which Hemingway approaches the transgender subject. Sure, he created manly women in the past, but this is flat out ambiguous and explicit sexuality. I find it strange that he should delve into the topic considering he all but abandoned his son Gregory after he came out to him as a transgender person. The idea apparently seemed abhorrent to Ernest, so why would he write an entire novel about it? Well, maybe he'd run out of ideas. Yes, running out of ideas has become a theme here. I think it's a fair criticism. I mean, if nothing else, you know you've been at it too long if you find that yourself as a writer writing a novel about a writer writing a novel.

Gregory had aspirations to be a writer, after a fashion. In the '70s he wrote a generally well-received biography on his dad. Then this book mysteriously appeared in the '80s. Perhaps the Hemingway family estate was running a bit low on funds and thought, hey, why not refill the coffers with a "new" Hemingway novel. Fans would go gaga over a newly unearthed book by Papa.

I'm jumping to conclusions like taking a leap off a cliff, but stranger things have happened. I don't doubt that there was an unfinished Hemingway manuscript laying about (apparently there was more than one), but there are so many things about this one that lead me to believe that in the very least it was tampered with to a great degree. Here are a few of those things:


The aforementioned deep look into a subject Hemingway seemed to be repulsed by.

At one point the character talks about writing "in dad's style." It's like Gregory giving the reader a cheeky wink-wink. And, whoever the writer is, he does it more than once.

Copying Papa's style is not impossible. In fact, reviewers making fun of Hemingway do it all the time here on Goodreads.

The story David is writing deals heavily with "daddy" issues, which - from what I've read - Gregory suffered severely from.

The big game hunter in David's story is Hemingway and the hunter's son sounds just like Gregory.


Of course all this could be Hemingway just writing about his relationship with his son, so I don't put a great deal of stock into it. Remember, this is just a loose theory.

Regardless of whether this is Ernest Hemingway's book or not, the fact is, this book is not a good read. There are some good points: the character study of a young author and that of a nutter going off the deep end. But this could've been summed up in half the time. This is not a long book, but it's too long for the very little that happens. Boredom set in for this reader at about the midway point.