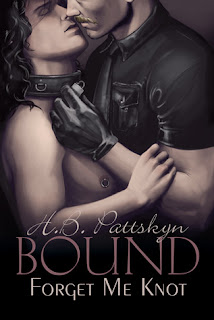 H.B. Pattskyn
Dreamspinner Press
Reviewed by Nancy
4 out of 5 stars

Jason Kennly needs to get a closer look when he spots a gray leather collar from across the dealers’ room at a science fiction convention, even if there’s no way he can afford it on his college student budget. After all, looking is free. But then he spots something he wants even more than the collar: leather booth owner Henry Durand, who insists Jason try it on. When Henry asks Jason to be his model at a bondage demo, Jason agrees despite his lack of experience as a sub and ends up spending a no-strings-attached weekend exploring his kinky side with a virtual stranger.

Then the con is over, Jason and Henry go their separate ways, and it’s back to real life. Coming to terms with his identity as a submissive and masochist isn’t easy for Jason. Suddenly he has to face fear, doubt, and a best friend who’ll do anything to get him away from “that creep” and back together with the ex-boyfriend who ignored him. All Jason wants is to be with Henry, but what if that means becoming his slave?

Jason puts a lot of trust in Henry early on and though their sex was blisteringly hot, some of their encounters made me squirm a little. Boundaries were pushed, but I trusted that Henry would respect Jason’s hard and soft limits and at no time did he betray my trust.

Trust works both ways, according to Henry:


Henry may be an experienced Dom, but he also has a vulnerable and tender side that is not sufficiently explored in this story. Jason lacks confidence, has difficulty communicating his needs, and desperately needs acceptance. His on-off relationship with his boyfriend, Terry, is frustrating. Terry has been rather inconsiderate on numerous occasions and Jason is unable to let Terry know what he wants and needs. His best friend, Kendra, borders on being too meddlesome, but she genuinely cares for Jason and has a very good reason to be concerned about his relationship with Henry. Jason does not have a good relationship with his father, who was unexpectedly saddled with him after his mother’s death. Despite Jason’s flaws and his inability to effectively deal with the difficulties in his life, I found his character genuine and difficult to dislike. I enjoyed being a part of Jason’s thoughts while coming to terms with his submissive nature and enjoyed his conversations with Henry.

Though the time they spent together was rather short, Henry is eager to teach Jason while at the same time forming a gradual connection.

I hope in time they will fall in love and have a more balanced relationship. As things are now, Jason’s precarious situation has me very worried and he still has so much growing up to do.

I’m very much looking forward to the sequel.
Posted by Nancy at 7:07 PM No comments: