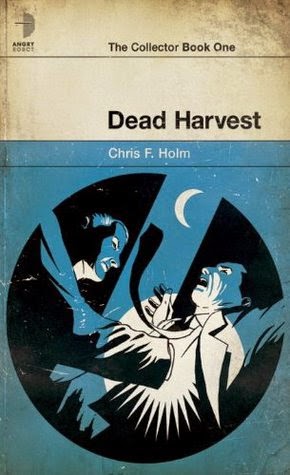 
Sam’s job is to collect the souls of the damned, and ensure they are dispatched to the appropriate destination. But when he’s sent to collect the soul of a young woman he believes to be innocent of the horrific crime that’s doomed her to Hell, he says something no Collector has ever said before.

5 stars for the cover and the publisher name!

I’ve been wanting to read an Angry Robot book and my friends’ enthusiastic reviews led me to grab this one from the library.

I just wish I could muster as much enthusiasm for the rest of the book.

I like noir and hard-boiled mysteries, but urban fantasy has been hit or miss for me lately and I’m not sure how I feel about combining the two.

Still, this was a fun, gripping and intense story for 2/3 of the book, at least.

Sam Thornton was once human. Now he is a demon without a body to call his own and has to find living or dead “meat suits” to inhabit in order to perform his job as collector of souls. His latest job is to collect the soul of a young girl who slaughtered her family. Only when Sam finds her, he learns her soul is pure and instead of taking it, he makes it his mission to protect her.

Now that Sam has incurred the wrath of his boss, Lilith, and the angels and demons are about to start a war, he and Kate are on the run.

This book was heavy on the action and dialogue, which made it fun and fast-paced and gave it a very cinematic feel. It was humorous and there were interesting flashbacks about Sam’s past and how he came to be a collector. I could have done without the helicopter hijack and the subway tunnel chases which for some odd reason slowed the pace of the book for me and I ended up setting it aside a couple of days.

While Sam was an interesting character with a distinct personality, I found Kate and the secondary characters rather thin. By the last third, I got tired of the chase scenes and found the plot twists underwhelming.

For a book about a flawed man who is trying to do the right thing, yet is doomed to be a servant of Hell for the rest of his eternal life, I would have liked some thoughtful exploration of Sam’s spiritual conflicts and his feelings about his gradual loss of humanity, particularly in comparison with the other demons.

Not sure I’ll be continuing with the rest of the series.

Also posted at Goodreads
Posted by Nancy at 5:00 AM No comments: