Shakespeare: The Man, The Myth, The Legend 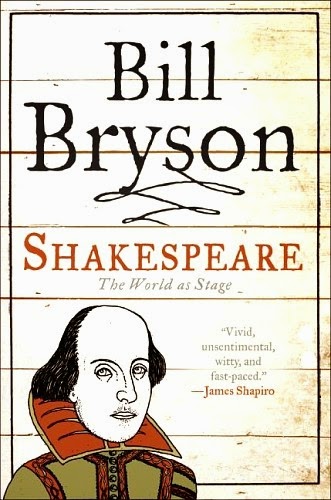 Shakespeare: The World as Stage by Bill Bryson
2007
Reviewed by Diane K. M.
My rating: 4 out of 5 stars


This audiobook was a perfect companion for a long road trip. Bill Bryson, who has now written books on everything from the history of the universe to the origins of our domesticity to America in the 1920s and, perhaps most endearingly, stories of his various travels around the world, here turns his attention to William Shakespeare.

In this relatively slim volume (it's less than 200 pages), Bryson researched what few facts are known about Shakespeare and synthesized them into chapters on his childhood, his "lost years" (1585-1592), his time in London, his plays, his fame, his death and, finally, the strange claims that Shakespeare did not write the works attributed to him.

Like most Americans, I was first introduced to Shakespeare in high school, when we read Romeo and Juliet, Hamlet, and a few of his sonnets. I've read more of his plays since then, but until now I have never read a biography of the man himself. After reading Bryson's book, I feel like I know as much as any modern person can know, simply because so few facts have survived. One Shakespeare scholar told Bryson that "every Shakespeare biography is 5 percent fact and 95 percent conjecture."

Even the few surviving portraits that are purportedly of Shakespeare cannot be verified. "The paradoxical consequence is that we all recognize a likeness of Shakespeare the instant we see one, and yet we don't really know what he looked like. It is like this with nearly every aspect of his life and character: He is at once the best known and least known of figures."

I liked reading the details of Shakespeare's life, but I think my favorite chapter was the last one on Claimants. Bryson thinks he has identified the person that started what he calls the anti-Shakespeare sentiment, an American woman named Delia Bacon. Bacon became convinced that Francis Bacon actually wrote Shakespeare's plays, and in 1852 she traveled to England to try to prove that Shakespeare was a fraud. Of course, there is no evidence of this, nor of any other claimants writing Shakespeare's works, but some researchers continue to come up with theories. Bryson picks apart the claims and shows what little merit there is to them.

"The one thing all the competing theories have in common is the conviction that William Shakespeare was in some way unsatisfactory as an author of brilliant plays. This is really quite odd. Shakespeare's upbringing, as I hope this book has shown, was not backward or in any way conspicuously deprived. His father was the mayor of a consequential town. In any case, it would hardly be a unique achievement for someone brought up modestly to excel later in life. Shakespeare lacked a university education, to be sure, but then so did Ben Jonson -- a far more intellectual playwright -- and no one ever suggests that Jonson was a fraud ... When we reflect upon the works of William Shakespeare it is of course an amazement to consider that one man could have produced such a sumptuous, wise, varied, thrilling, ever-delighting body of work, but that is of course the hallmark of genius. Only one man had the circumstances and gifts to give us such incomparable works, and William Shakespeare of Stratford was unquestionably that man -- whoever he was."

I would heartily recommend this book to fans of English literature and history. It has Bryson's trademark dry wit and humorous phrasings, so Bryson fans should also be satisfied. The audio CD I had also included an interview with the author, which was delightful, as expected.

On a more alarming note, I'm nearly out of Bryson books to read. Now that will be the winter of my discontent.
Posted by DianeLibrarian at 6:00 AM No comments:

Dungeon Crawl by Robert Bevan
My rating: 3 of 5 stars

When a priest hires the crew to retrieve a holy relic that has gone missing, they quickly get more than they bargained for in the form of mummies, drow, and treachery!

The Caverns and Creatures gang is back again in a short adventure. This one is a good old fashioned dungeon crawl, as the title indicates. If you've ever played an old school D&D dungeon crawl adventure, you'll know what you're getting.

The humor of the previous books is present and the characters have matured a bit. There is a good amount of action and a couple plot twists, although one was fairly predictable. Then again, this is based on D&D adventures so that's not necessarily a bad thing.

This is a pretty short book so I can't say much more without blowing some of the funnier bits. 3.5 out of 5 stars.

The Last Policeman by Ben H. Winters
My rating: 4 of 5 stars

When Detective Henry Palace is called to the scene of an apparent suicide, he can't shake the feeling that it's murder. But with an asteroid due to hit the Earth in six months, no one really cares and with the infrastructure crumbling, Palace has his work cut out for him...

It's taken me way too long to give Ben Winters' existential detective tale a shot. I'm kicking myself for it but the upside is the second book is already out and the third comes out in two months.

The Last Policeman could easily have been called "The Last Man Who Gives a Crap." With only six months to go, society is crumbling. When people stop doing their jobs, things go to hell in short order. With a disintegrating cell phone network, exorbitant gas prices, and extreme jail terms for most offenses, Henry Palace has his work cut out for him.

The writing is hard boiled with a taste of Herman Hesse. Palace, and most of the other cops, question what the hell he's doing trying to prove a suicide was actually a murder with only six months left on the clock. I think it's the case of one man finally getting to do what he's always wanted to do and not giving that up just because the world is going to end in half a year.

The case is solveable but it's a tough nut to crack. When an insurance actuary is the victim, you know he's not living an exciting life. Palace works the case despite all the naysayers and several attempts on his life, having some meaningful moments with his sister and a friend of the victim along the way.

It's the first book in a trilogy but doesn't really feel like it. Enough seeds are sown for the two subsequent books but The Last Policeman is fairly self-contained.

It's funny. It's not often I rate a book so highly when I'm not overly fond of the main character. On one hand, I understand doing what you've always wanted to do. On the other hand, I have a feeling Henry Palace was probably a tattle-tale in grade school before graduating to hall monitor upon reaching high school. Still, I like the guy, even if he is a by-the-book tight ass.

Four out of five stars! Bring on Countdown City!