In Praise of Reading 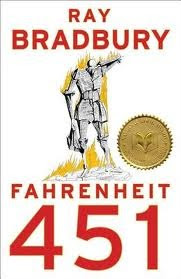 
Reviewed by Amanda
3 Out of 5 Stars

Fahrenheit 451 is one of those books that I should have read by now. Occasionally, a student comes to me, eyes ablaze with indignation that anyone should ever burn books, and they want to talk about it. "Why would anyone do such a thing? This is impossible! Why would such a world exist?" And, more tremulously, "Could this world ever exist?" As shame and humiliation wash over me, I have to say, "Um, I haven't read it. But it's on my to-read list!" They look stricken, abashed, as though I have failed them. And maybe I have. If anyone should have read the book about burning books, it's the English teacher, right? Hell, I'm just excited that they get so pumped over it. In a world where student literacy scores are on the decline, where a teenager would rather pick up an iPod than a book, and most students only read 2-3 books a year (except for my room, where I must brag for a moment, we kick some reading ass), the fact that some of them still read Fahrenheit 451 and become incensed gives me hope for the future.

It is a shame that I haven't read Bradbury's novel until now. This is a book that calls out to the bibliophile. It reminds us what a simple and precious thing a book is; what a liberty it is to own them and have the privacy to read them and the right to think about them; what a privilege it is to not have our books censored. Reading is a simple freedom that so many take for granted because they see just the physical act: sitting in a chair and turning a page. What they don't realize is that, in that simple act, an entire person is formed: beliefs, opinions, and thoughts are constantly challenged, reassessed, and reshaped. Reading is the act of constantly taking our measure against the world and deciding if we're the type of person we want to be. Reading keeps us in check and it reminds us there are others out there in very different circumstances for whom we should feel empathy. In short, reading is the very act of maintaining our humanity.

In Fahrenheit 451, however, reading is a freedom that has been willingly renounced by the citizens. As more immediate forms of technological entertainment became available, people simply lost interest in reading. In Bradbury's world, the living room itself is a wall-to-wall tv, constantly droning on and offering pure entertainment with which the viewer can take an interactive role, but there is no substance. When you're not in the living room, you wear a Seashell in your ear that constantly broadcasts news and auditory entertainment. Silence and introspection are shunned. Perhaps most frightening is that this is eerily the world of today: flat screen televisions on every wall of the house; interactive technology such as video games and computers; iPods constantly delivering a steady stream of noise. In terms of technology, we are living in Fahrenheit 451. As Captain Beatty tells Guy Montag, "School is shortened, discipline relaxed, philosophies, histories, languages dropped, English and spelling gradually neglected, finally almost completely ignored. Life is immediate, the job counts, pleasure lies all about after work. Why learn anything save pressing buttons, pulling switches, fitting nuts and bolts?" If that doesn't sum up the general direction in which education is heading, then I don't know what does, unless it's when he tells Guy that the educational development can be summarized as "Out of the nursery, into the college and back to the nursery; there's your intellectual pattern."

The novel focuses on Guy Montag, a fireman whose job is to start fires instead of putting them out. Specifically, the firemen exist to burn houses where books are being kept by those few who still cling to the written word. Through a series of events, Guy becomes self-aware and begins to question the world around him--specifically, what threat is there in books and could books hold the key to curing the detachment, the ennui, and the hatred that permeate the world in which he lives. As Guy learns to think for himself, we're taken on a journey through the dystopian world in which he resides.

Now, after all this, you may wonder why I only gave the book a 3. In terms of Bradbury's stance on books and his presentation of what value books should have to humanity, I'd definitely give it a 4. However, in terms of the execution of his dystopian conceit, it isn't quite as powerful as I wanted it to be. This may be because I just finished reading Nineteen Eighty-Four and, compared to the elaborate lengths to which Orwell goes to describe every facet of Oceania's society, the dystopia here felt rather thin. I wanted more background and more history than Captain Beatty presents to Guy Montag, but perhaps that's the way it should be. In a world where thinking isn't valued and knowledge is condensed, it shouldn't be surprising that the characters know very little about their own history.
Posted by Amanda at 8:00 AM 2 comments: