In Sarah Gailey's interesting Magic For Liars, Ivy Gamble uncovers the truth about a death in a magic school 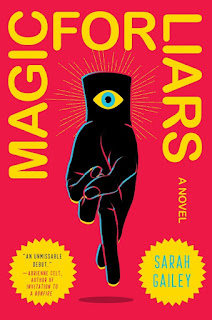 “Magic for Liars” Sarah Gailey’s new mystery about a mysterious death in the library of a magic academy is unexpected. It’s more an exploration of the human condition than a book about magic, and yet magic, is at the heart of the novel. In a way this novel is a retelling of Icarus and hubris. But mostly it’s about relationships, and loss, and love, and life itself. Gailey delves deep into the aspects of magic that most fantasy authors never have the nerve to tackle- that is real life issues of birth control, abortion, cancer and death. Can Magic cure cancer and if not, why not. Typically fantasy authors shy away from the challenge. Gailey, however, doesn’t just delve lightly, she peels the band aid off in one huge yank. And for Ivy Gamble, the down on her luck private detective, who has been affected by magic her whole life. Not because she has magic, but because her manipulative, and mean twin sister Tabitha does. So to Ivy, Tabitha goes all the glory of magic, all the bright hues, all the specialness, and to Ivy, is the drabness of regular life, the hurts and slights of life. But it is Ivy Gamble, a 14 year private investigator, who trolls the depths of philandering spouses and failed marriages who is hired by the headmaster of the exclusive Osthorne Academy to investigate a death at the school. And leave it to the unmagical Ivy to figure out not one mystery but three. This is not a book for everyone. Don’t expect magical fun a Hogwarts with a little mystery thrown in. This short book is not for teens. It’s for fantasy readers who want to be challenged in their understanding of the plusses and minuses of magic and its affects. Magic and the magicians, who practice it, do have limits.

Ivy Gamble is a private investigator, who has spent her entire career investigating the dregs of married life – cheating spouses and those who think their spouses are cheating. She is tired and defensive, wounded from losing her mother at a young age to cancer and hurt from the fact that her twin sister, Tabitha, has magic and she doesn’t. But its more than that, its also that Tabitha tortured Ivy, not literally, but by toying with her emotions when she was a kid.

Mugged and stabbed in the hallway of the dirty stairway in front of her office on the first few pages of the novel, Ivy ignores the wound and soldiers on with her down on her heels life- a stab wound is just one more thing to ignore, and in the pages of the novel, there are plenty of other wounds less physical and more emotional that Ivy throws into a garbage can in her mind and closes the top.,
But life starts to look up. She gets a new client, Marion Torres, who wants her to investigate the strange death of Sylvia Capley, who was found bisected in the library of Osthorne. The death has been ruled misadventure by the Magical police, a spell miscast. But Torres does not believe it. Because in a sense, Capley was merely the health teacher and couldn’t cast such a spell. So Torres wants Ivy to investigate, and already knows a Gamble, because Tabitha, Ivy’s sister teaches at the school already.

On one of her visits to the school, Ivy is confronted by Mrs. Webb, who recognizes Ivy is hurt and takes her shoulder apart right in front of her and cures the infection. Its a vivisection in detail. Ivy is amazed about her skill, but wonders about whether that same skill can be used to cure other deathly ills. The headmaster tells her it cannot, that Mrs. Webb is one of the foremost healers of the time and others could not even attempt to cure cancer or other deathly perils.

Ivy starts her investigation by questioning some of the students – Dylan DeCambray who thinks that he is the Chosen One, the culmination of a long family prophecy, who will change magic forever and his sister Alexandria and her posse – Brea, Melissa and Courtney. But it’s not only about the investigation. Ivy is now living on campus, in the dead teacher’s apartment, and Ivy can envision herself as a student at the school, and for her investigation to succeed, she takes on a role she has wished for her entire life, that of a magic user like her non friend sister.

Ivy has skills, she is after all a pro in discerning liars and manipulators and the games people play. So she quickly notices that Alexandria has a strange power over her friends, and she also learns about the relationship between two students, which may have resulted in unintended pregnancy consequences. It seems that the dead teacher was the go to for birth control and other potions. But Ivy also has a heart to heart with her sister. It seems an attempt to clear the air and resume a relationship cutoff when they were teens by Ivy’s jealousy of her sister’s powers, her belief that her sister did nothing to help their sick mother and Tabitha’s meanness. Ivy was traumatized both by the loss of her mother and by the loss of her sister, but maybe this investigation will give her a chance to re-connect. Reconnect to her humanity and reconnect to her sister, but does Tabitha really want to re-connect?

Galley smartly has Ivy get involved with a teacher at the school, Rahul, the physical magic teacher, who can connect some of the dots about magic that Ivy does not know, but also can break the wall that Ivy has used to separate herself from life. And although Ivy lies to him too, that she is a mage like her sister, it’s really a white lie to help with the investigation, although it’s also to make Ivy feel better about herself because she just “knows” from her experience with her sister that Rahul would think differently about a person who doesn’t have magic.

While living in Capley’s apartment on campus, Ivy finds a journal, with an obsession about magic. But since Ivy does not speak magic she needs help in deciphering some of it. And Ivy also discovers that a crucial part of the medical file on Capley is missing. Finally Ivy also uncovers a big secret through her adept questioning and intuitive leaps that one girl was pregnant and needed a surgical medial abortion, a spell that requires a lot of magical training, which was illegally cast not long before the death of Capley. It’s a spell that reveals to Ivy something this reader had figured out – the name of the killer. And while talking about this in the library, Ivy uncovers something else, the Chosen One.

So in the end, Ivy solves three mysteries and maybe at the very very end, gives herself a chance to have a real life.

As stated above, do not go into this book looking for a fun little mystery about kids in a magical school. This is an adult book for adults.

Posted by Jeffrey Wendler at 10:01 PM No comments: