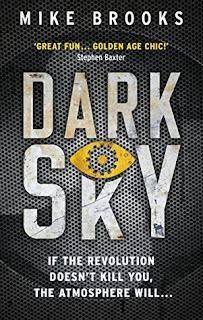 A scamp spaceship captained by Ichabod Drift, a rogue and ex-privateer, not afraid to step across the legal line, and crewed by a likable set of characters, including Tamara Rourke, an ex-spy, who thwarted a plot to drop a nuke on Amsterdam, and then went after the potential perpetrator by conniving and fooling the military that they were a select crew employed by Rourke's old spy organization, it had all the great elements of old style science fiction spaceship books. I re-read it again just before reading Dark Sky, the second book in this series, and it still held me in thrall.

Although readers may clamor for more of the same thing, its not unusual for a novelist to try to do a different story. But this story, is just not that much fun. Revolutions are not fun and when our fun crew gets " stuck on planet during a revolution" all the fun bits that we liked in the first story disappear.

We all know the story, although Brooks re-tells it slightly differently. The setting is interesting, the planet is subject to intense storms so all of the people live underground. The planet was settled for its ore and the miners are treated horribly by the governor and the far flung Russian empire that runs the planet for the ore.

The miners start the revolution to oust the government just as Drift and his crew arrive on planet to smuggle information off planet to the system's strongman and casino owner. Naturally the crew ends up split up, with Drift and two of his crew, Jia Chang, his pilot and her brother Kaua, the ship engineer, stuck fighting for the local security forces, while Jenna, their computer slice (hacker) and Apirana, (their muscle) end up separated when Apirana gets wounded and Rourke lands with the revolutionaries.

While Drift ingratiates himself with the outnumbered chief of the security forces by helping them in a gun battle, Rourke convinces the patriots of her worth (based on her knowledge of security forces protocol). Meanwhile Jenna and Apirana soon join Rourke, but Apirana is hurt. Making matters worse for our crew is that another spaceship is on planet as well, this one led by Ricardo Moutinho, a bad apple, whose only redeeming quality is the size of his equipment. Moutinho's crew has also been separated during the early days of the revolution, so he and Rourke end up working together with revolutionaries.

In the end, the two split crews have to work together to get off planet before government forces come to put down the revolution. Its all very predictable.

I am hoping that Brooks finds a fun story in the upcoming third book.
Posted by Jeffrey Wendler at 2:04 PM No comments: 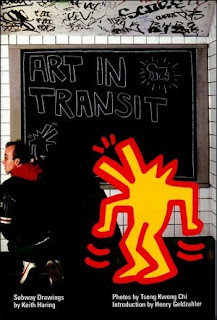 I left New York in 1976, so I never had the pleasure of seeing Keith Haring’s subway drawings.

As someone who was brought up never to deface public property, I have mixed feelings about graffiti art. The closest I’ve ever come to practicing the art form was the childish drawings I did on our apartment walls in colored pencils. As I got older, and graffiti proliferated on every public space in New York City, my dad always told me he’d break both my arms if he ever found out I was drawing or hanging out with kids who did.

So you can imagine how daring I felt when my best friend and I drew on buildings and sidewalks using colored chalk. Knowing the drawings would be washed away with the next rain kept me from feeling guilty about defacing public property. Our art was nowhere near as sophisticated as the colorful drawings made by experienced practitioners using spray paint, but I get why people enjoy doing it. It is a way to express oneself and prove our existence by leaving a mark.

I hated the scribbling, the crude stick figures, the hearts with initials inside. To me, that is graffiti vandalism. What I do enjoy is the colorful art that engages the viewer.

Keith Haring’s subway drawings were done in chalk on the empty black paper panels used for advertising. They were artistic, imaginative and confrontational. They had to be done quickly, as he faced fines and arrest if the transit police caught him.

One of my favorite drawings is next to the movie billboard advertising Amin: The Rise and Fall. The radiant babies drawn on the 1982 issue of Penthouse featuring Morgan Fairchild made me laugh.

While this is a wonderful documentation of Keith’s art, it also does a nice job capturing the diversity of the people who ride the subways and shows a glimpse of 80’s culture. I had forgotten how skanky the NYC subway system was in those days.