Another Lyrical and Thought-Provoking Thriller from Boston Teran 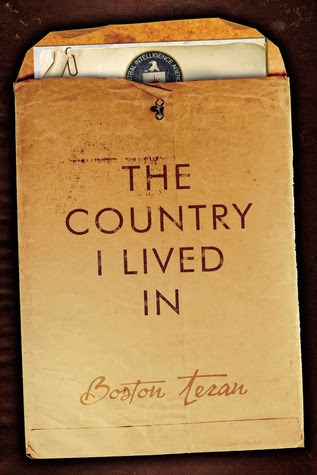 
One of my favorite books of the last few years was The Creed of Violence, by the elusive and mysterious author, Boston Teran. Set mostly in pre-revolutionary Mexico in the early Twentieth Century, it featured two great protagonists and an engrossing, convoluted and thought-provoking story.

Now comes an excellent sequel, The Country I Lived In, set in Texas and in Mexico, and featuring John Rawbone Lourdes, the son and grandson of the two protagonists from the earlier book. It's the dawn of a new age in the United States; prosperity reigns, rock and roll has come crashing into the culture; the early glimmerings of a new civil rights movement can be seen in the South and elsewhere, and the Beats are beginning to pave the way for the Counter Culture revolution that would transform the country only a few years later.

Against that backdrop, though, powerful forces are resistant to change, fearful of a Communist menace from abroad and afraid that those who challenge the status quo here at home are weakening the country from within. Barry Goldwater has not yet suggested that extremism in the face of defense of liberty is no vice, but there are those who clearly believe this to be the case. And they are ready and willing to take whatever steps they feel are necessary to protect what they perceive to be America's best interests, whether it involves overthrowing governments abroad or stamping out internal dissent here at home.

Into this mix steps John Rawbone Lourdes, a young man made old before his time by having fought in both World War II and Korea. Now he just wants the opportunity to finally get to know the country that he has given so much to defend. "Something was missing from his life, something of purpose and destiny, to take away the quiet sadness that kept to itself inside him."

Lourdes has bought a new Packard convertible and wants nothing more than to "hit out on the road...[like] Huck on the river, Parkman on the Oregon Trail, Brando burning up miles of asphalt in The Wild Ones." Fate intervenes, though, when Lourdes gets a desperate call from an old army friend in Laredo who is in trouble and needs his help.

Sadly, Lourdes arrives only a little too late, to find that his friend has been tortured and murdered. Lourdes feels honor-bound to investigate and avenge his friend's death, even though he has no idea what sort of trouble his friend might have been in.

It soon becomes apparent that some very dark and mysterious forces are at work here, including agents of the CIA. They immediately put the squeeze on Lourdes, suggesting that he was in league with his murdered friend in illegal activities and questioning his own patriotism in spite of his long and decorated military service. But in the spirit of his father and grandfather, John Rawbone Lourdes is not a man to be intimidated or to be distracted from his self-appointed mission. He is also not a man who should be underestimated.

What follows is a scary and fascinating tale that races deep into the heart of Mexico and involves a great cast of characters, including two very gutsy and determined women. Like its predecessor, this is a book that will keep most readers up well into the night and that will keep them thinking about these characters and about the issues this book raises for a very long time to come.
Posted by James L. Thane at 5:57 PM No comments:

Girls to the Front: The True Story of the Riot Grrrl Revolution by Sara Marcus
Reviewed by Jason Koivu
My rating: 5 of 5 stars

So began the primal scream of a frustrated girl, an angry band, a feminist movement.

Girls to the Front is about the Riot Grrrl movement of the early '90s, and when you speak of Riot Grrrl, you speak of Kathleen Hanna and her band Bikini Kill. Hanna released her rage against the sexism that surrounded her through music, discovering a sort of cadre of like-minded girls in Olympia, WA, some of whom were already entrenched in grassroots feminist punk ideology. Together they formed a united sisterhood that sought an end to sexist behavior and actions - be it catcalls or rape - through violence if necessary. They were sick of boys (and men) keeping them down, holding them back, and they were ready to fight for equality.

At its pinnacle of success, Riot Grrrl was a glorious camaraderie of young women gathering together to express themselves, their fears, their longings, to pour out their darkest nightmares thrust upon them by horrifying encounters. Some had suffered worse than others, but nearly all rejoiced in having a safe place to gather and discuss their stories, whatever backgrounds may have driven them to Riot Grrrl.

At its lowest point, Riot Grrrl was a misunderstood and misguided, amoebic, antagonistic entity flailing against the mass media that infiltrated and eventually corrupted it, just as much as it flailed against itself, with grrrls fighting grrrls over petty squabbles or the very fabric of their own ideology.

While in college, a friend and I attempted to go to a Bikini Kill concert in Boston, but it was cancelled. Rumor had it that a fight had broken out at the previous night's show and, due to some guy getting his ass kicked by a bunch of girls, the tour was on hold. From an outsider/boy's perspective, that was Riot Grrrl. As an outsider on the fringe of this underground movement - going to shows and putting out my own zines - I wanted to know what was going on. But this was a girls' club and I wasn't invited.

Luckily, along came Sara Marcus' book, perhaps 20 years too late for me, but I was glad nonetheless to finally lift the veil and discover what I'd missed, to learn what had really gone on. Marcus wields her words with a deft hand, a mighty stroke and blunt force. Girls to the Front is not perfect (It gets an extra star from me for pure nostalgia's sake), but you are in good hands with this writer on this topic. Most of society won't get this. Those girls that were part of this movement won't need this. But for those of us who collected riot grrrl band 7 inches or caught their record store shows with a couple dozen other folks, but got no closer, this book is for us.